Gangrel looks back at a bloody good career

Boo! It’s Halloween, and what better way to spend it than looking back with Dave Heath at his career as Gangrel, the Vampire Warrior, as well as his lesser-known time as a Blackheart in Stampede Wrestling.

Grab a bottle of True Blood, true believers, and enter at your own risk for a bloody good read!

Over the course of 25 years, Heath has had a fascinating professional wrestling career. 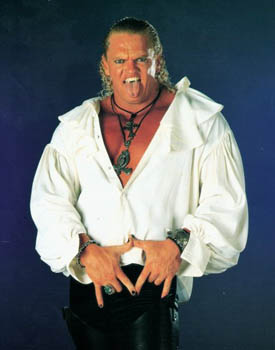 Gangrel in the WWF.

Surprisingly, though one of his favorite characters was playing one of the Blackhearts early in his career.

“It started up in Canada at the Stampede Wrestling promotion. The story was Stu Hart went out on the road, slept with a rat and had a couple of illegitimate sons who became the Blackhearts,” he recalled recently for SLAM! Wrestling. “So we had come with black masks to claim the Hart throne in Calgary. That was a fun character and I went on to tour Japan as that. I also liked the Vampire Warrior character that became Gangrel. You talk about my characters those are the two.”

Out of the many storylines he was a part of, Gangrel particularly enjoyed all the mystery surrounding he and Edge when they started the Brood in the WWE.

“When I first came into the WWE, there was never really any insight into how we knew each other and how we related to each other. It was kind of cool,” he recalled. “I liked that they were able to create the storyline without actually telling it. We never really found out, including me!”

For many WWE fans the Brood left an indelible impression and Gangrel felt that the connection to vampirism had a lot to do with it.

“People love vampires. True Blood, Twilight, The Vampire Diaries, everything has been vampires recycled over and over. The whole concept for the Brood thing came from the movie The Lost Boys. Vampires, they don’t have to win. It would be cool if they got beat up every week. It happened at a time that was kind of strange. It was a revamp of the Freebirds sort of,” said Gangrel. “You had the vampire lure and an entrance with music and fire that would get anyone over. You throw a little blood spraying in there over top of that, Christian and Edge, two long-haired, good-looking guys, the ugly fang guy in the middle, you’ve got it all covered. I think it was a good catalyst at the right time.” 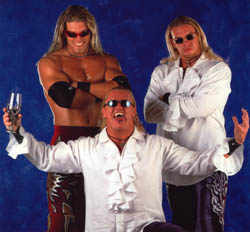 The Brood: Edge, Gangrel and Christian.

Looking back on the success of the Brood, Gangrel doesn’t think the faction was expected to get over the way it did with the fans. “It was supposed to be a transition thing to put Edge in and later have him move on. Yet, it did get over and they had a hell of a time killing it off. Still in my heart of hearts I don’t know if they ever really killed the Brood off. It was left as more of a mystery. So today that’s what intrigues people.”

The period when the Brood was joined with The Undertaker’s Ministry of Darkness faction in the late 1990s was a very confusing time for the group.

“The idea came about because despite being physically destroyed in matches regularly, the Brood was still becoming more and more popular with the fans. So they told us they were putting us with the Ministry of Darkness. Well if you remember the whole group would come out on the stage to be the big villains,” said Gangrel. “Every night we would get out there and the fans would say the Ministry sucks. Yet there would be these chants: ‘Brood, Brood, Brood.’ It was an amazing thing. The whole building would start chanting for the Brood. So we weren’t heels. All of a sudden they said they weren’t going to keep us in the Ministry anymore. Afterwards they had us feud with them and slowly dismantled the faction after that.”

One of the developments after that was the formation of the New Brood with Gangrel and the Hardy Boyz. However, Gangrel didn’t feel it was that well received by the fans. “I think it [the New Brood] was more about getting the Hardy Boyz away from Michael Hayes. God Bless Michael, but he was holding them back a little bit.” 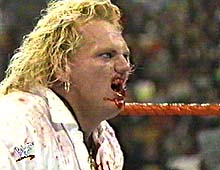 Of those Gangrel has wrestled over his career the ones he enjoyed working with the most were Owen Hart, Chris Benoit, Eddie Guerrero, Big Bossman, and Crash Holly. “We had good chemistry, the same aggressive style. When I was with those guys, it would force me to step up. Whereas when I would wrestle someone the same as me or with lesser skills I would step down instead of bringing them up; that was one of my greatest weaknesses,” he admitted. “One of the weirder guys I had chemistry with was ‘The Lethal Weapon’ Steve Blackman. I really enjoyed wrestling him. No matter what it always seemed to work. Everyone would come out and shake their heads, yet I would go in there with him and we had chemistry together that I couldn’t even explain. I think he liked beating me up!”

In 2001, Gangrel was released by the WWE for the first time. What led to that release was Gangrel broke his neck and it took a year to rehabilitate it.

“I had damaged four of my vertebrae, but I worked to rehabilitate it because if I did the surgery I probably couldn’t wrestle anymore. I got released when I finally got clearance to come back to work,” he said. “I was gone for a year and they hired me back. In between that time I was going to England, which was great because I was working several nights a week and doing six months of the year over there at a time.”

The WWE would go on to hire Gangrel back several times only to re-release him. During the period between 2004 to 2007 Gangrel would work for not only the WWE, but Ohio Valley Wrestling, All Star Promotions in the United Kingdom, and Deep South Wrestling. “Most of the time I was working for Brian Dixon [All Star Promotion’s owner] in England. It was run six to seven days a week. It wasn’t the big crowds, but it had a lot of tremendous workers and many of the young kids that were breaking into the business that you see now in the WWE like Sheamus and Drew McIntyre. It was quite pleasant.”

In 2006, when WWE started up their version of ECW, there were rumours there was going to be a vampire stable involving Kevin Thorn, Ariel and Gangrel. “At that time they hired me back and told me I was going to be the second top babyface in ECW. Then they sent me home and I never heard back from them. I turn on the TV and I see they started Kevin Thorn in ECW. I thought, ‘Wow, I was supposed to be the leader of the group.’ They ran with that for a while and afterwards called me up to let me go. I asked what was going on, and they said Kevin Thorn never really got over and that was that. Well, he wasn’t really a vampire, but more a gothic character, which made it kind of an apple and oranges comparison. So your guess is as good as mine as to what happened.”

In 2007, Gangrel would make his last appearance in the WWE, as a participant in the 15th Anniversary Raw battle royal. However, the reason why is actually tied up in the legal rights to the name Gangrel.

“When I started in WWE, they had to lease the name Gangrel from a company called White Wolf. When I did the old-school battle royal in 2007, the lease had run out. There was a big stink because of the use of the Gangrel name on that show. The company White Wolf had sold to another company who came after the WWE for using the Gangrel name,” said Heath. “There was a big lawsuit, and the judge who ruled in the case threw it out and said to the WWE and the other company that neither of them really had a right to the Gangrel name, and that I, who had been wrestling under the name for the last 10 years, had more right to it. The WWE then tried to approach the company to resolve the issue with the Gangrel name, but weren’t able to; so since the WWE doesn’t own the rights it’s unlikely I’ll be doing any work for them in the future.” 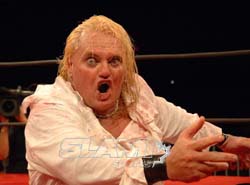 Gangrel in action in 2007. Photo by Mike Mastrandrea

That same year also marked Gangrel’s directorial debut, with a pornographic film, something he would later regret.

“That was a flash in a pan kind of thing. It sounded really good at the time, but it was probably one of the bigger mistakes I made. It wasn’t everything I thought it would be. It didn’t work out and caused me a lot of grief,” he lamented. “A lot of the wrestling shows I do are family oriented, so once I got labelled having directed porn, I lost many bookings. I’m trying to rectify that and hoping my reference to it will die off, but it just doesn’t. If you Google or Wikipedia me it turns up. Everywhere I go fans ask to go on the film set, of course it’s all guys who say that! It’s done more harm than good. It’s not something I would be interested in ever doing again.”

In 2009, Gangrel participated in the Hulkamania Australian Tour. However, his role was not just as a wrestler, but a booker as well. “That tour was actually with a company out of Los Angeles I work for now called Knokx Pro Entertainment. It was very stressful and very exciting, but it was an adventure for me because it was more office work instead of wrestling. It was good, but a little hard to deal with stuff like the egos. I would say it was a successful tour, but didn’t draw quite as well as we would have liked. Still it was fun.”

“It was a very tragic thing. She loved wrestling and she loved her kids even more, but wrestling was a passion. She was very misunderstood. A lot of people judge and say a lot of things, but she was in a lot of pain in this world,” he said. “She was a great presence like a wildflower. It’s a very sad thing, but I’m glad she’s in a happier place now. I would hope that wrestling fans know that she loved wrestling just as much as they did and that she loved the wrestling fans. She appreciated every minute of it and she loved the sport. She loved all the fans in the sport. She would go out of her way to sit down with the fans and she would remember their names. I remember going from town to town; I would say who are these people? Yet she would remember who they were.”

Gangrel’s shares that love for wrestling which continues unabated to this day. “I love getting up, driving from town-to-town, putting on the boots, getting in the ring, wrestling, and having a beer with the guys after the match.”