Wrestling Reality — The Life And Mind of Chris Kanyon, Wrestling’s Gay Superstar, the posthumous autobiography of Chris Kanyon and co-written by Ryan Clark, is three different stories intertwined to give a glimpse of the roller coaster ride that was Kanyon’s life. 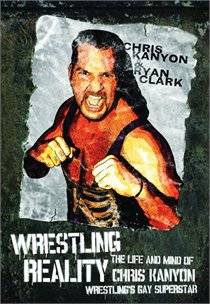 The first aspect is the story that has been told in all wrestling biographies. Loving wrestling from the age of six, Chris Klucsarits spent hours wrestling in parks and at his grandmother’s house with his friends. Using a degree in physiotherapy to fund his passion, he starts his training at Lower Eastside Wrestling Gym with Pete McKay. His journey took him to Fabulous Moolah’s school in South Carolina, Wild Samoan Afa’s training centre in Allentown, Pennsylvania, and the WCW Power Plant in Atlanta. Time spent in Smoky Mountain Wrestling, playing enhancement talent for WWF, a short run at the USWA in Memphis, his time in WCW, working in Hollywood on a film about Jesse Ventura and on Ready to Rumble and his run in WWF are all talked about in detail. It is a fascinating look at his experience in the business.

“Sinister Minister” James Mitchell plays a vital role in in Kanyon’s life and career, and is a huge part of the story. Although Mitchell’s legitimate ties to the Satanic church and quirks aren’t a secret it is interesting to get a deeper look at his character as well. Diamond Dallas Page and Billy Kidman were two of Kanyon’s best friends and play an important role later in the book.The second aspect to the book reads similar to autobiographies of other gay celebrities and athletes. Noticing one of the nine-year-old players on his older brother’s baseball team for the first time, he realizes at age six that he is gay and works hard to hide it throughout his life. From having sex with women to a series of one-night stands with men, Kanyon is honest in his experiences. The stories are not any more graphic than those told in bios from other wrestlers, so it should not be a deterrent in reading the book. Part of the tragedy in the story is his inability to have a relationship due to being so deeply in the closet. Playing the Mortis character gave him the most freedom, he says, because it hid his face so he wasn’t as likely to be recognized.

The third story is his battles with mental illness, which resulted in him taking his own life on April 2, 2010, just a few weeks after completing the book. The book starts with a suicide attempt in September 2003, and he speaks frankly about his battles with depression, being bi-polar, and how it affected his relationships with others. It isn’t the sole focus of the book, but the story of Chris Kanyon can not be told without it.

Kanyon was one of the most underrated and innovative wrestlers of the 1990s. One of the comments made is that he was too nice for the business, and the book gives that impression. He was always willing to train and help others, including Jay Leno and Dennis Rodman; he jumped to the task when ordered by Eric Bischoff to help with film and TV projects, and even got thrown off a giant cage to a rampway in WCW. He watched helplessly as the intended “huge” Blood Runs Cold program was tossed aside with the introduction of the New World Order and never realized his dream of being world champion despite his hard work. His career at “the show” fizzled out with him being humiliated by Vince McMahon, forced to dress like Boy George and “come out” of a giant box to be beaten up by The Undertaker. Kanyon felt that McMahon knew he was gay, used it against him, and eventually fired him for it.

At the time of his coming out in 2006, the attempt for publicity was confusing and didn’t pan out. Although athletes have come out, usually after retirement, in other sports there has yet to be an active, out mainstream professional wrestler. Kanyon tells a story about another wrestler hitting on him, respecting that wrestler in not disclosing their name, but there are no out wrestlers in the business right now. WWE has still had its blatantly homophobic moments, and in the macho world of wrestling the question of how a gay or lesbian wrestler would be received if treated as something other than a joke, or played by a straight wrestler only to go “just kidding” like Chuck and Billy, remains unanswered.Many wrestling bios are about the top stars in the business. Kanyon’s book is a look at being a mid-to-lower card wrestler and the challenges and frustrations with it. There are funny moments in the book — his coming out story to his parents leads to the sort of questions that gays and lesbians dread from their parents. Another story about a intended hook-up recognizing him reads like something out of a comedy, and would be quite funny if it wasn’t terrifying for Chris.

Wrestling Reality — The Life And Mind of Chris Kanyon, Wrestling’s Gay Superstar is both inspiring and tragic, because you know the ending is his death at the age of 40. This knowledge makes the final chapter a difficult read. It seems that he had finally accepted his sexuality, his medical issues, and was getting help. He seemed to realize that he could influence people, and that his story could help others with their own struggles with their sexuality.

“I guess I just want to help as many people as I can, because I know that if there was an openly gay wrestler — or a gay person in any sport or job that I could look up to — it would have made it easier for me. If I can help anyone, I will feel like I’ve done something good. And I hope that by telling people what I’ve gone through, others can find inspiration to overcome their own troubles,” he writes.

“Remember, whoever you are, enjoy the journey. Be you. And enjoy your life.”