Rougeau: I don’t know if it’s prostate cancer yet

Jacques Rougeau Jr.’s wants to clarify the story that has been erroneously reported across the Internet: Yes, he found out that he has a problem with his prostate, and it indeed might be cancer, but he won’t know one way or another for a few more days. 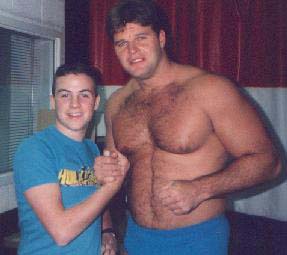 Jacques Rougeau Jr. and a young fan in his WWF heyday.

“If you have a problem with your prostate, it doesn’t mean it’s cancer,” he told SLAM! Wrestling, taking a break from proofreading his autobiography.

Rougeau was in Quebec City, promoting a big show, when he went in for a routine test — after all, part of the proceeds from his show was going towards fighting prostate cancer.

“It’s funny how life is,” he reflected. “In that deal, I go have a test. The whole idea of that is to desensitize the men that, when they get to the age of 50, to get checked out, just for prevention.

“I go there and they find that my prostate is huge compared to a normal one.

“So they took some tests and within a couple of days, I should know if it’s cancerous or if it’s benign.

“I’ll find out in a couple of days.

“My doctor told me not to worry about it.”

Rougeau, 51, said that he is “too busy to worry,” though he will admit to concern about his 11-year-old son, Emile, who lost his mother, Jacques’ second wife, two years ago to cancer. “I can’t afford to let him go now,” he admitted.

He is hopeful that his case will spur others on to have their prostates check. “Prevention is a lot better than the problem itself.”

In the meantime, Rougeau is racing to finish his autobiography, scheduled to be out December 1st.

“I’ve already got so many people waiting for it, it’s not funny,” he said, boasting about some of the advance publicity. “It’s really a juicy book, it really is. Finally we’ll get the real version of the Bulldogs story.” … “Now it’s really so detailed … now I’m writing every little detail, from how it started, to what built the aggression to what built the animosity. There’s a lot of great stories in that book.”