Live in Atlanta, Raw was full of treats

ATLANTA – For the first time since WrestleMania XXVII weekend, the WWE returned to Atlanta, Georgia, for Monday Night Raw. But this is no ordinary Raw. Not only is it Halloween, but Raw has a group of special hosts: The Muppets. While five years ago this pairing may have been odd, it fits perfect in the current PG-Era of WWE.

There wasn’t much live that wasn’t seen on TV. The Muppets handled themselves well.

Every time any of The Muppets showed up, they got the biggest pops of the night. It felt organic to have The Muppets because while they were there to promote their new movie, it didn’t feel like a corporate sell-out like with Hugh Jackman. 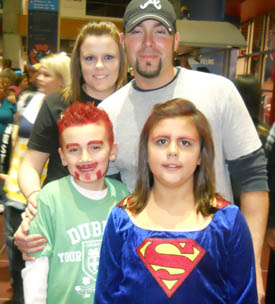 Another member of the Sheamus/Beaker clan in attendance at the Halloween night edition of Monday Night Raw, along with his parents and super-sister. Photo by Matthew Asher.

Sheamus’ talk with Beaker was the highlight of The Muppets interactions simply because it caught everyone by surprise. While the audience loved Kermit and Miss Piggy insulting Vicky Guerrero, the reaction from the mother comment was minimal, probably because everyone knew it was coming.

People were disappointed that The Rock’s message, agreeing to team with John Cena at Survivor Series, was a pre-recorded message. I do expect “Froot Loop Troop” signs everywhere next week.

The crowd was full of people in costume for Halloween, and in the ring, it was the Divas that were all dressed up. For my money, the best costumes are the Bella Twins as Mario and Luigi and Eve as Robin.

In person, Air Boom are pretty incredible, and it must have been hard to call the match or do a recap.

In a rematch of WrestleMania XXVII’s main event, The Miz took on Cena in the finale. It was a good back and forth match, but unfortunately the crowd seemed disinterested, waiting for R-Truth to make an appearance.

During the outside skirmish someone wearing the Scream mask grabs Cena. Cena fights him off and knocks him down. The match goes back into the ring where Cena locks in the STF and Miz taps.

During his post-match celebration, the Scream person comes into the ring where Cena AA’s him into next week. Cena takes off the mask to reveal (GASP!) R-Truth.

Not sure if this next part happened after Raw went off the air, but it likely did — Cena got a mike and said since he’s already been tricked today, it’s time for the crowd to get a treat. He points out that he was scheduled for a tag team match tonight and since both Miz and Truth are there, along with a referee, they should have the match. Cena calls for his partner: CM Punk wearing a Dracula mask.

Both Truth and Miz are slow getting up, Cena grabs Miz while Punk grabs Truth. Miz and Truth eat an AA and GTS, respectively. Cena pins Miz for the victory. He grabs the mike again and says, “Why don’t they make this a clean sweep?” Punk picks up Truth again, hits another GTS and pins him for another victory.

Overall, live, it was a very entertaining night and especially by all of us who grew up watching the Muppets and all of the Jim Henson works.

The show was great for fans of The Muppets, but not only did it appeal to the nostalgic members of the WWE Universe in attendance, it seemed to pick up quite a few new members along the way. At the end of the night, the kids sitting in front of me didn’t want to talk to their parents about John Cena and the Rock; they wanted to talk about how they could see more of “The pig and frog.” A touching moment indeed.