MONTREAL – It’s not every day you can see a show with a Hall of Famer, a former WWE tag champion, the ROH World champion, one of the best female wrestler in the country and one of the best talent developed in your province in the past years. Montreal’s CRW could claim all the above, and more, after its third anniversary show Saturday night.

For the record, the Hall of Famer was Ted DiBiase Sr., who is in the Pro Wrestling Hall of Fame and the WWE Hall of Fame, the former WWE tag champ was Sylvain Grenier of La Resistance, the ROH champ is Davey Richards, LuFisto is the woman wrestler, and Kevin Steen is Quebec’s current greatest wrestling export. 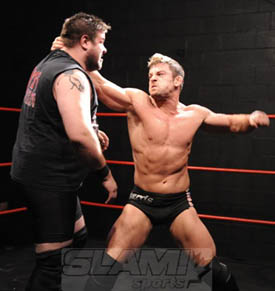 While the main-event between Richards and “Mr. Wrestling” Steen was known since the show was first announced, DiBiase’s presence was a last minute thing.

“We received a call from the pastor of the church where Mr. DiBiase is going to be at Sunday morning. He saw one of our flyers and asked us if we would be interested to have him on the show,” said Patrick Boucher, one of the owners of Combat Revolution Wrestling.

“We had to wait until it was official to announce his presence and that was only this (Saturday) morning that everything got settled. If they’d called before, I would’ve changed the poster and do more publicity around his presence.” said Gilles Boucher, Patrick’s father and the other half of the ownership team.

But how many times does a company get offered a Hall of Famer? The Bouchers took the opportunity to welcome DiBiase to their show at the Centre CRW even if they had little time to do publicity around him.

It did convince some fans to show up for the show. “I saw on Facebook that DiBiase was here tonight and decided to come because of it.” said local sports journalist and wrestling fan Guillaume Lefrançois.

A meet and greet was added 30 minutes before the show where fans could have a picture with “The Million Dollar Man,” get an autograph, buy his autobiography or one of his DVDs. DiBiase, who has been a minister for 10 years now, was in Montreal for the third time in three years, but it was his first appearance on an independent show.

“I rarely do indy shows. Between my speeches, which are three week-ends out of four, WWE, some wrestling conventions and some others like the Comic-Cons, I have a pretty busy schedule,” DiBiase told SLAM! Wrestling.

After the first match, DiBiase was introduced in the ring and did talk about why he was in the city and sort of did the kind of speech he usually does at church, but more wrestling orientated. 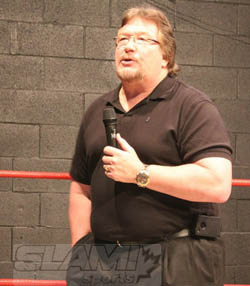 Ted DiBiase speaks to the crowd. Photo by Maxime Langevin

“If I’ve said it once I’ve said it a million times, everybody’s got a price for the Million Dollar Man!” he said to start things off. Throughout his 15-20 minute speech, he talked about wrestling fans being the greatest fans because of their loyalty; how he became a born again Christian after he was caught committing adultery in 1992; how he’s seen Canada more than most Canadians throughout his career; stories about Lex Luger and name dropping some other born again Christians like Shawn Michaels, Nikita Koloff and Tully Blanchard.

In a line that earned him a really good hand of applause, he said: “If you thing being a man is taking steroids, grow up, that’s not being a man.”

During the long promo, the fans in attendance were really paid attention. But it wasn’t DiBiase’s first speech at a wrestling show and he knew what the fans were there for. “I could tell stories throughout the night but you came to see wrestling and I thank you for listening to me. If things are not so good for you and even if they are, come see me tomorrow.”

As for the wrestling, the CRW show was stacked even before DiBiase’s presence was announced. The main event of the card was ROH World champion Davey Richards against Kevin Steen, marking Richards’ first indy appearance in Quebec.

“I came here twice with ROH but I never had the chance to see the city,” said Richards. “Canada has a rich history of wrestling and if it wasn’t for Canada and me watching Stampede Wrestling when I was a kid, I wouldn’t be a wrestler.”

The match itself was a good one, but it could have been better if it wasn’t for Steen’s injured back. “I really had trouble bending over during the match,” Steen said afterwards. In his defence, a Richards-Steen match is never an easy one, as these two have wrestled many times throughout the world.

“We wrestled together for the first time in 2005 in California. Then, we wrestled on the East Coast, the West Coast, in England, Germany and France. It’s always a war!” said Richards after the match, a bout he won after Pat Skillz, Steen’s partner at CRW, came out to help his buddy, but turned against him as Richards pushed Steen into Skillz before putting him in an ankle lock to win the match. 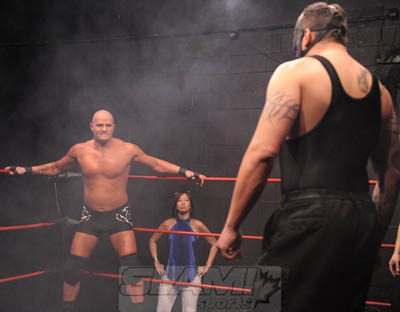 In the semi-final, 20-year veteran “Paranoid” Jake Matthews surprisingly won a three-way match against 6-foot-10 giant Darkko and ROH’s Michael Elgin, of Toronto. Matthews was a bit of a weasel here. After Darkko put the chokeslam to Elgin, Matthews, from behind, threw Darkko out of the ring and took the pin on Elgin to win the match.

The CRW champion Dru Onyx successfully defended his title against former WWE tag champion Sylvain Grenier, thanks to his friends and students, Shayne Hawke and Stew Ramjattan, who interfered to help him keep his championship.

In a women’s tag team bout, the duo of LuFisto and the newly-crowned Femmes Fatales champion Kalamity won over Angie Skye and Missy. It was a special night for LuFisto and Kalamity as they were working together for the first time since Kalamity beat LuFisto for the championship a few weeks ago.

“I changed my style since I won the title. I’m more intense in the ring, maybe even stiffer! But I’m kind of anxious for tonight, because I want LuFisto to be proud of me,” said Kalamity before her match.

As far as her trainer is concerned, she completely trusts her trainee. “I find a lot of satisfaction in letting her my spot. I don’t have to run the show anymore!” said LuFisto.

Finally, in what many considered the best match on the card, Player Uno and Stupefied, known as the Super Smash Bros., became the new CRW tag team champions by defeating a young promising team, Thomas “The Pipes” Dubois and Mathieu St-Jacques. It’s just one more accolade for the Super Smash Bros., Quebec’s 2010 tag team of the year. Before 2011 ends, they will wrestle for 2CW in New York against former WWE champions Paul London and Brian Kendrick and they will also make a return to PWG in December, as they will face the American Wolves of Eddie Edwards and Davey Richards. They are in talks with PWG to go there on a more regular basis.

Overall, the show was good considering it went a bit too long, but when you have such a line-up plus a last-minute addition like Ted DiBiase, you can’t really do anything about it. CRW has been flourishing on the Quebec indy scene for the past few years and things are looking good for it.

“We’d like to bring more stars and have other meet and greets like this one. We’re working on something that would make that wish possible. It was also the first time we filmed the show with commentators and in a more professional way so we could sell more DVD and hoping to make a name for ourselves outside the province.” said Patrick Boucher.

Here are the complete results from the CRW 3rd anniversary show in front of 125 people.