Brian Knighton, who wrestled as Axl Rotten in the original ECW, has been found dead in Baltimore. He was 44.

It was a rocky road for Knighton, who was a hardcore innovator and a hardcore drug user for a time.

But in the ring, opponents remembered him as a smooth operator. 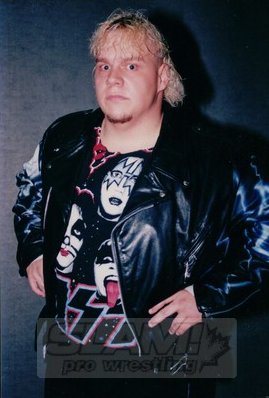 “I can say he was a really cool guy and, believe it or not, one of the smoothest guys I’ve worked in the ring with,” recalled Toronto’s “Bloody” Bill Skullion, who worked with Axl Rotten a handful of times. “One of those rare guys where you step in the ring for the first time together and it just clicks and becomes magic.”

There was one of those infamous accidents once in Detroit during a match between Skullion and Rotten. Skullion grabbed a cup from the bar, thinking it was water; instead it was bleach.

Axl was a far better talent than his career ever ascended to,” said Shane Douglas. “His demons and problems had a lot to do with that, but there were many others with the same or bigger issues that did still ascend to the apex of our industry. So I believe that that comment, being bandied about carelessly today, falls far short of giving Brian Knighton his proper due in wrestling history.

Though Knighton started in the pro wrestling business as a British noble-like wrestler, he became a star with violence, and his partner in crime was Ian Rotten.

He remembered Knighton as a “Nice guy, always friendly to me. I helped him wrap a bat in barbed wire once backstage at the ECW Arena.”

Another ECW original, Mike Bucci, a.k.a. Nova and later Simon Dean in WWE, summed up Rotten’s up-and-down life in a Facebook post: “RIP Axl Rotten. Hopefully you’ve found the peace in death that you didn’t have in life.”

Rotten’s last Tweet was “The way I do things may not be the way you do things but you will find out there is only 1 way. My away! ‪#‎AxlsTruth‬”

Knighton, who was born April 21, 1971, grew up in the Fells Point area of Baltimore, Maryland. He was a young fan of pro wrestling and dropped out of Grade 11 at Southern High School to try to follow in the footsteps of his heroes. By the time he was 17, he was wrestling around the area, holding down a weekday job in a video store.

An early supporter and opponent was Mick Foley.

“[Knighton] was one of the guys that seemed to have what we refer to as ‘it,’ ” Foley told Brian Eck of the Baltimore Sun in 2005, just before the WWE’s first One Night Only pay-per-view. “He had an unusual-looking body … [and] he had a very odd charisma to go along with a unique wrestling style and an ability at such a young age to talk very well and portray a character.”

At 5-foot-11, and a wide 320 pounds at his peak, tattooed and pierced, with a blond Mohawk haircut, Rotten did stand out.

He was a natural for ECW, Paul Heyman’s collection of misfit toys putting on unique, groundbreaking wrestling shows. Heyman had met Knighton were both briefly in World Championship Wrestling at the same time.

“Make no mistake about it, Axl helped put ECW on the map,” wrote Rob Feinstein, who was involved with ECW’s video sales, on Facebook. “His style of hardcore quickly drew crowds to watch himself and Ian make hardcore history when they had their barbed war bat matches, Taipei death matches and countless other barbaric matches that nobody in Philadelphia have ever seen before.”

As wild as Knighton was in the ring – broken glass, barbed wire, fire – he was equally crazy away from it.

In the interview with Eck, he talked about his abuse of alcohol, prescription drugs such as Nubain and OxyContin, heroin and cocaine. He was clean and sober at the time of the One Night Only PPV.

“I was hooked on a muscle relaxer known as somas,” Knighton told Eck. “I was mixing beer and pills, and everyone knows you’re not supposed to do that. You were supposed to take like four somas a day, but I was taking about 40 a day. Toward the end it was upward of 100 a day. I would sleep for two or three days at a time.

“I found that I could never wake up, and then I was introduced to cocaine. So now I could take a handful of pills and I wasn’t hurting and could stay awake.”

Cut from ECW in 1999, he bottomed out before cleaning himself up. He also wrestled here and there through the 2000s, but was never a big star again.

Besides the addiction issues, he had serious back trouble over the last few years.

I’ve lead a self destructive lifestyle, done things I’m not proud of, and alienated some of the best friends I’ve ever had. At the same time I’ve also entertained thousands of fans around the world and been a major proponent in establishing hardcore wrestling as a legitimate attraction. I’m satisfied that my legacy in this business will live on despite any mistakes. I’m one of the most unruly and outrageous men to ever step foot in the squared circle and will be remembered as such.

— with files from Bob Kapur and George Tahinos