Axl was a far better talent than his career ever ascended to. His demons and problems had a lot to do with that, but there were many others with the same or bigger issues that did still ascend to the apex of our industry. So I believe that that comment, being bandied about carelessly today, falls far short of giving Brian Knighton his proper due in wrestling history. 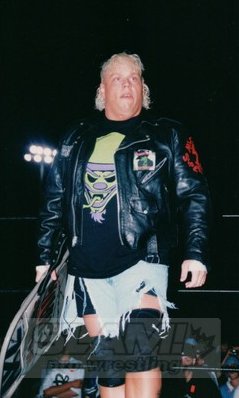 It is a place that Brian’s talent and effort should have taken him to. Still, all of his hard work would be derailed by a few all-too-human mistakes on Brian’s part. Yes, Brian did have his issues with drugs over the years. Which of us has not? Our industry screams out that we’re super-human, more than mere mortals — superstars! And although everyone running this industry knows that’s a “work”, they are quick to point the finger and judge those of us who failed to live up to that super-human preface, even though they knew the “angle”. And who was/is it that profits from the efforts of talents like Brian? The very ones casting the dispersions, that’s who!

Rather than dwell on Brian’s sad end, I’d rather share a story of one of the times I had the good fortune to work with Axl Rotten in ECW, as the World Champion. This happened in a little venue outside of Boston on one of the off-nights ECW ran before its big Saturday show at the Greyhound Park in Revere, MA. We were booked in the main event and the building was stifling, from the humid and sticky summer Boston night AND the overflow crowd that ECW always drew in that area. Well, Axl was not exactly known as a svelte athlete or a paragon of fitness. Still, Axl Rotten could work his ass off! On this hellish night, at the end of another great ECW card, it was our job to cap off this outstanding show with a main-event-worthy match. After about 25 minute of hard-hitting and fast-paced extreme action, Axl was sucking wind! Problem was, we still had to go through the climax of the match and I was determined to finish it in style. But by this point, Axl was ready to just end it, and do so before one of us played head-spinning, pea-soup-spewing Regan in “The Exorcist”.

So Brian decided he would head straight to the end of the match, before we had given the paying hardcore fans a comeback, false finishes, or the swerve that ECW title matches seemed to utilize so well. As I went to Irish Whip Axl into the ropes to begin the process I just described, he sucked in what little air he could get and asked me to hit him with my finishing move, the belly-to-belly suplex. I said “Nope”, and proceeded to Irish Whip him into the ropes (the plan being to follow that and give) him a high back body drop. As I pulled him into the Irish Whip, a split second after he begged for the belly-to-belly, Axl yelped out an exacerbated “Oh, jeezus christ” and was thrown into the ropes for the previously mentioned backdrop. But execute it he did – flawlessly! I about pissed my tights because of his comment. That was Axl… Brian! A consummate professional who both loved, and lived for, professional wrestling and giving the fans their money’s worth.

My hope, for Brian’s memory, is that before anyone lapses into the standard, he-got-what-he-deserved mentality, consider that all Brian ever wanted to do was entertain the fans who’d paid to see him and the company he was wrestling for. That is the Brian Knighton I knew as a friend. That is the “salary” Axl Rotten earned during his career. Neither deserved to meet their end in such a sad place. I hope Brian AND Axl have both found the peace they so richly deserved. Rest in peace, buddy!

Shane Douglas is a former world champion who has wrestled in ECW, WWF, TNA, WCW and more. He can be followed on Twitter @TheFranchiseSD or you can visit his website.