There was a time where whatever the promoter put on television became gospel, and the fans just ate it up and wanted more.

It was more like the movies and television when the genie was still in the bottle. No one was asking questions and all we wanted was to see good and evil fight.

For those of us who were watching during the mid-’80s, Magnum T.A. and Nikita Koloff are exactly that, the perfect good guy and the perfect bad guy.

Or, put in context of the timeframe, an American hero against Russian Nightmare, wrestling mirroring the world of 1985.

The DVD My Side of the Story: Magnum/Nikita from Kayfabe Commentaries brings you right back to that era, like a time machine, where things were simpler and you actually just believed in what you were seeing.

Both men are interviewed and asked separately the same questions and you get transported on a trip down memory lane as their stories mesh into one.

Their main storyline was the famous best-of-seven series that was inspired by Dusty Rhodes’ love of the basketball playoffs. 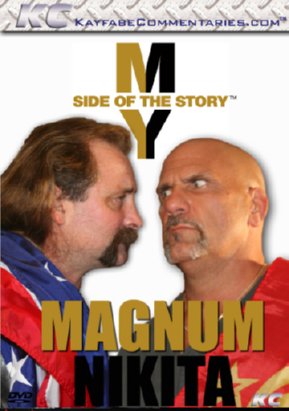 Nikita barely knew what he was doing out there, as he was rushed into action, but would later become good in the ring years later. Magnum was being groomed with quick wins and inspired storylines to be the world champion someday. In a concept sorely lacking today, they were protected, meaning that they didn’t lose face, didn’t lose matches, didn’t participate in goofiness. Television made them into stars.

When they decided to pit Magnum T.A., the United States champion, against the Russian Nightmare, the people were ready to pay for it.

The DVD does a good job bringing you back into the frame of mind of that time period and it follows the story of their feud for the most part. My criticism is that they sometimes fall into the trap of it becoming a shoot interview instead of dealing solely with their feud.

The most interesting point they both make about their rivalry is that there were no shades of grey, it was all black and white. From involving Magnum’s mom into the original angle to the tragic accident that took his career away and made Nikita into a hero, it was all a result of the respect they built in those legendary matches. It was always clear who was the hero and who was the villain.

There was never any question about if they had a good match or not, all you wanted was for Magnum to beat that evil Russian.

Even when the DVD slips from its mission you get interesting details as Nikita discussed the possibility he had to join Barry Darsow and be a part of Demolition in WWF but turned down because of his loyalty to the Crockett promotion.

I’m a Magnum T.A. mark, and meeting him in 2013 was the highlight of all the conventions I have attended with Patric Laprade to promote our book Mad Dogs, Midgets and Screw Jobs. This DVD brought me back when I chose my favorites by the fortitude of their character and not by their set of moves. It was fun.

If you are just a tiny bit curious about Magnum, you should see My Side of the Story: Magnum/Nikita. But if you remember a time where he was The Man that was going to be world champion then you should definitely see this. It is the perfect moment of what was wrestling in 1985 for Jim Crockett Promotions.

They could cut a promo, and you could see in their eyes that they were seriously. You would want to see them fight, pay for that match. That’s how good they were. They created something unique that you can’t duplicate today and we should all take a moment to enjoy it and find our way to when wrestling was fun and it felt real.