Kayfabe Commentaries never disappoints with their DVD releases and one of their latest titles, My Side Of The Story – Magum/Nikita, certainly falls into that category as it chronicles the legendary feud between Magnum T.A. and Nikita Koloff over the United States title in the summer of 1986. 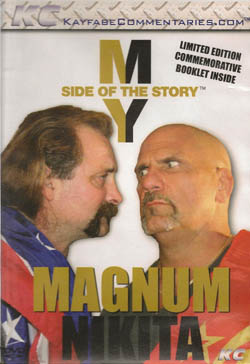 A popular babyface versus a monstrous heel. USA versus Russia. The height of the 1980s glory days of pro wrestling. It was Magnum and Nikita in Jim Crockett Promotions. And it was the stuff legends are made of.

This 90-minute DVD touches on all the aspects of the feud. Both Magnum and Nikita are asked the same questions separately by Kayfabe Commentaries co-owner Sean Oliver and some answers are similar, some are not. What is common is that both seem to have mutual respect for one another. Both, too, also give praise to Jim Crockett and Dusty Rhodes, with the latter being responsible for starting the feud as booker at the time.

As for the feud, which was highlighted by their best-of-seven series, Magnum put it on himself to make it a solid storyline. Nikita got out to a 3-0 lead in the series, only for Magnum to come back and tie it at 3-all. The final match, in Charlotte, N.C., had Nikita cheat to win the title. Magnum also said the crowd that night was amazing and after he lost, he listened to the crowd and it was spooky to the point he thought someone wanted to kill someone. Nikita agreed.

Nikita said his favorite part of the feud was the contract signing. Yes, this was done back in the day, but not for every title match like we see now on Monday nights. Magnum’s mom was part of this angle and Magnum laughs as he remembers this night, which also saw him punch NWA President Bob Geigel.

Koloff also takes a shot at WWE, not by name, though, by saying that when he and Ric Flair went into Philadelphia, the fans weren’t used to wrestling. He said they were used to a cartoon — a 15-minute intro, five-minute match and a 15-minute exit. But six months after that first match, Nikita and Flair came back and the crowd was hot.

The matches Magnum and Nikita weren’t without their share of real-life injuries. In one match, Nikita bladed himself and hit a vein in his forehead and bled from head to toe. Nikita also booted Magnum in the kidney another time and Magnum said he had trouble breathing for the rest of the match.

Magnum and Nikita both discuss The Great American Bash tour of 1986. Yes, fans of today, the Bash used to be a summer-long event and not a single pay-per-view. Magnum liked being around the country music starts and Koloff remembered wrestling in the NFL and Major League Baseball stadiums.

Pre-match discussion wasn’t a part of the business back then. Nikita said there were no scripts, but the outcomes were always pre-determined and only a couple spots would be discussed before the matches. Sadly, that’s an aspect that’s non-existent today.

Each cut a generic promo from the feud and it’s a safe bet these types of promos will not be seen any time soon. They also discuss juicing and how much Magnum bled as the babyface got more sympathy and also what each learned from the other. This also shows the respect factor once again.

As the first part of the DVD goes on, it strays from the Magnum-Nikita feud at times, but that’s not a bad thing. Each touch on their dealings with the WWF, with Magnum saying he was never approached to go “north” and Nikita saying he was almost part of Demolition with Barry Darsow after Darsow (then Krusher Krushchev, later Smash and Repo Man) left the NWA for the WWF.

The second segment of the DVD is a reunion of Nikita and Magnum with Kayfabe Commentaries co-owner Sean Oliver. It’s another Q & A session, but with both wrestlers side-by-side. This segment is only about 30 minutes, but the topics discussed keep the viewer glued to the TV. Camaraderie amongst the wrestlers is talked about and jealousy was seemingly not an issue back in the 1980s. Again, the word “respect” comes up. Check the message boards nowadays and it seems everyone in the business is jealous of everyone else.

Nikita says there were several times that fans got in the ring to try and attack him. Oliver retorts by saying that fans aren’t that passionate any more. Very true.

The DVD ends with both guys proclaiming their love for one another and footage from a post-interview photo shoot.

This DVD — wow. To see Nikita and Magnum together talking about wrestling of yesteryear is a breath of fresh air. It makes fans like me realize that when we were kids, wrestling was fun and enjoyable.

Another aspect that kept popping into my head was thinking about how good Magnum could have been if his Porsche hadn’t crashed that night in 1986. But still, even after being in the business just a few short years, he’s still talked about in a positive light and his feud with Nikita will always be one of the best. This DVD keeps those memories alive.