Nikita Koloff heads out on a Western Canada odyssey 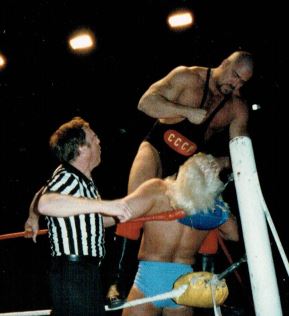 Nikita Koloff beats on Ric Flair at MoscaMania II in February 1987 in Hamilton, Ontario, as referee Tommy Young warns him to get down from the corner turnbuckle. Photo by Greg Oliver.

It was the main event of MoscaMania II, and one of only a few times Koloff (who won by disqualification, earning bragging rights but not the championship) wrestled in Canada.

“I’ve been to about three cities,” Koloff recently told SLAM! Wrestling in anticipation of his appearances with CWE (Canadian Wrestling’s Elite) on the “Nightmare on Elite Street” tour that kicks off on July 31 in Stonewall, Manitoba.

“I am jacked up and excited to see what I’m going to see on this trip, because I’ve never been to these places,” he said. “I went 50 years ago to Thunder Bay, Ontario with my grandma and my uncle in the summertime for a couple days for his vacation from work, and other than a couple cities I wrestled in, that’s it for where I’ve traveled north of the border.”

Making his debut on NWA television in 1984, Koloff was brought in to Jim Crockett Promotion’s Mid-Atlantic Wrestling territory by his “Uncle” Ivan Koloff to prove Soviet superiority, winning both singles and tag team championships with his dreaded Russian Sickle clothesline and formidable power.

Born Nelson Scott Simpson, Koloff is a graduate of Robbinsdale High School in Minnesota (along with Barry Darsow, Curt Hennig, Rick Rude, and many more). He was an all-conference receiver in high school and played college football at Golden Valley Lutheran College and Moorhead State prior to pro wrestling.

“Back in my college days I had a football coach who took the B.C. Lions to the Grey Cup and won in 1964, Dave Skrien, he was later the head coach for the (Saskatchewan) Roughriders and took them to the Grey Cup,” said Koloff, the pride evident in his voice. “So that’s another reason I’m super excited about coming to Canada as I’ll be thinking about Dave Skrien and all that CFL history.

“And one of my dear friends, Larry Kerychuk, he played quarterback for a couple of the Canadian teams (Edmonton Eskimos, Winnipeg Blue Bombers) in the CFL back in the late ’60s and early ’70s, way back when, so I learned over the years to appreciate the Canadian game and just how wide open it is. In fact, just two days ago I was out for an exercise walk in Robbinsdale and they had one of the Canadian football games on TV at one of the restaurants and I thought that was pretty cool.”

Reflecting on his memories of Canada, Koloff recalled the time he tag teamed with Baron Von Raschke against The Road Warriors in Hamilton at the first MoscaMania in ’86. 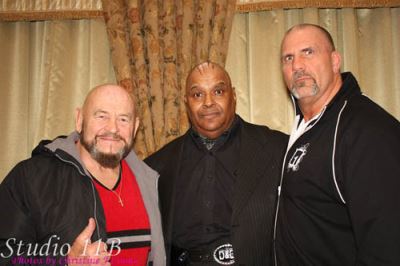 Ivan Koloff, Abdullah the Butcher and Nikita Koloff at a fan fest in January 2009, in Carteret, NJ. Photo by Christine Coons.

“Me and Ivan, we did some things with the Baron in tag teams and six-mans, and Baron was certainly one of those guys who helped educate me in the art of professional wrestling,” said Koloff. “I feel very fortunate to have had so many guys like Baron, Krusher (Khruschev), Don Kernodle, Ricky ‘The Dragon’ Steamboat, and the list could go on and one of guys who helped me, people like Wahoo McDaniel and a real legend of the Mid-Atlantic, Johnny Weaver, that really helped me learn the ropes.”

In a career that lasted nearly a decade, Koloff is remembered for his many classic feuds and Russian Chain matches at The Great American Bash, Starrcade, and other supercards with the likes of Magnum T.A., Sting, and The Four Horsemen throughout the NWA, AWA, and WCW before retiring in 1993, to pursue ministry work that has taken him all over the world.

“Ivan and I moved into the ministry and hopefully impacted many other people’s lives in positive ways through the ministry work that we did — sometimes together, and sometimes separately — and I feel very fortunate that we were reunited in a sense as a tag team once again, obviously in a different setting, but able to impact people even deeper,” said Koloff.

Nikita said it was an honour to speak at Ivan Koloff’s graveside service when he passed away earlier this year.

“We stayed in contact over the years and we did a number of things together, sometimes wrestling-related, but more ministry-related in the last 15 years we kept that bond,” he said. “People sometimes ask, ‘Was he really your uncle?’ And I say, ‘Well, he was just like an uncle, we weren’t blood related but I had a lot of respect for him and really looked up to him and am very grateful for his mentoring in the wrestling world and what he taught me in that business.'”

Like Ivan Koloff, Nikita rarely made public appearances or signed autographs at indie wrestling shows, conventions or fan fests, other than to promote his books.

“And that was intentional,” said Koloff. “I’ve tried to be very selective, even in the States where there’s autograph signings every weekend it seems, and you got the same guys doing one a week or several times a week. But yes, Ivan and I were very selective on where we went and what we did, just to make it more valuable for both the fans and the promoter who was bringing us in. So, if it was more of a rarity that we were coming in it would mean more to the fans, and it would be better for the promoter, as we were thinking of them as well.”

Koloff said that, more than anything, he’s looking forward to hearing personal stories from the fans on his upcoming tour, making its way from Manitoba to British Columbia, and then ending way back in the middle of the country, with shows in the Ontario cities of Thunder Bay and Sault Ste. Marie.

“I really appreciate when fans will share with me, ‘Hey, I remember that one match you had …’ or ‘My grandmother loved you,’ or ‘My kid brother and sister saw you wrestle in…’ and all the different stories and perspectives I get to hear,” said Koloff. “If fans didn’t come out and share those stories, I would never get to hear them otherwise, so more than anything, I love the stories I come away with from these rare appearances.”

Koloff paused for thought, then continued: “I have a real affinity for the fans. And as far as I’m concerned — I’ve been a sports fan all my life — I believe wrestling fans are the best fans on the planet. They are just so passionate and knowledgeable about the history. And because I’ve only wrestled a couple times in Canada, like at those shows in Hamilton all those years ago, I’ve never had an opportunity to meet a lot of the fans up there, and more than anything, that’s got me super excited about coming to Canada.”