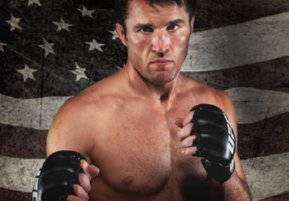 “It could not have happened to a better guy… I deserve it because I represent everything that this award stands for,” Sonnen said.

The award, named for the man who helped revitalize University of Missouri’s wrestling program with Don Faurot, is issued to an “exceptionally competitive wrestler who adapted his or her wrestling skills and competitive nature to excel in Mixed Martial Arts,” according to the hall of fame and museum. Sonnen will receive the honor during the Hall of Fame weekend, July 21-23, in Waterloo, Iowa.

Sonnen said not just the award, but the hall of fame alone, is “a tremendous way to be recognized in front of your peers.”

“There’s a list and there’s a line and my name has come to the front of it,” Sonnen said. “It’s just such a good time to be a wrestling fan. It’s an Olympic year.”

Kyle Klingman, director of the National Pro Wrestling Hall of Fame/Dan Gable Museum, said Sonnen’s “solid wrestling background” and the fact that he “transcends mixed martial arts” factored into the decision to bestow him with the honor.

“That background translated into a remarkable career in mixed-martial arts,” Klingman said. “Chael consistently fought the best competition in the industry, which is the mark of a champion. His colorful personality attracted viewers to the sport, and that is a benchmark of any great athlete.”

Past honorees include Pat Miletich, Randy Couture and Matt Lindland. To be combined with the likes of them, according to Sonnen, is “very flattering.”

“Those were guys that I trained with and bled and sweat and traveled with and admired for a very long time,” Sonnen said.

“The real highpoint for me came in the practice room, working hard, trying to achieve goals that seemed unobtainable,” Sonnen said, “and that’s where my best memories come from. I was able to travel the world, but I didn’t see any of it… but I was there. I was competing, and I was trying, whether it was MMA or amateur wrestling, being around the guys forming those friendships… seeing their struggles.”

While his accomplishments are a long list, Sonnen’s career also is littered with failed drugs tests. But as far as those issues are concerned, he said it’s, “Nevada State Athletic Commission – Six. Chael Sonnen – 11.”

“I’m a bad guy, and I’ve broken every rule they ever had,” Sonnens said. “I even started making up rules just so I could break them. And everyone can focus on the things they found in my system, but they don’t (realize what I got away with).”

While Sonnen gained notoriety for his fighting career, his beginnings are rooted in amateur wrestling — a sport he begged his father to let him join until it became a reality at nine years old. Sonnen said when he started out, he didn’t know how to participate. Without computers or the Yellow Pages, Sonnen said it was “a long struggle — long and lonely and answerless struggle,” but he had the commitment to make it through.

However, it was never his intention to go into MMA. When Sonnen started wrestling in 1986, the concept didn’t even exist.

“MMA was not a goal of any fashion. I wrestled because I thought that was the only way to figure out who was the toughest guy in the world… until mixed-martial arts came around,” Sonnen said.

When MMA entered the fold, he said he “had no choice” but to make the transition to prove he was the toughest.

As his fighting career came to a close, Sonnen stepped out of the ring and into an announcing booth, but said there weren’t any challenges to making the switch because he is a fan of the sport, surrounded by wrestlers who weren’t. Sonnen said he was coached by a man who did not know who Olympic gold medalist Kenny Monday was.

For wrestlers and coaches to not know the likes of Monday or four-time world champion John Smith is “a really big insult,” according to Sonnen.

“They didn’t understand … They didn’t dream that big, didn’t pursue it,” Sonnen said. “So, I was never one of those guys. I love wrestling, all of it. I could play a trivia quiz with the best and brightest out there… I am just a huge wrestling fan. So as far as going over to a broadcasting role, that was easy.”

Sonnen also has taken his lifelong fandom for professional wrestling to the broadcast stage with Jeff Jarrett’s Global Force Wrestling, which he said Jim Ross helped him attain.

“Jeff Jarrett hadn’t had the foggiest idea of who I was,” Sonnen said. “He’s not a UFC guy. I got the opportunity basically by demanding the opportunity.” 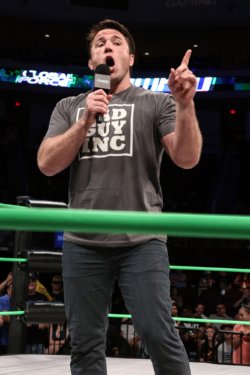 “He reminds me of a Jesse “The Body” (Ventura) or a heel Lawler,” Ross said. “He could be Heyman-esque with the right partner and product.”

Sonnen said his time with GFW has been “very, very fun.”

“It is really a fantastic product, the producing, the leadership that we have,” Sonnen said.

Two families — the McMahons and the Jarretts — have run the wrestling business in his lifetime, Sonnen said, but GFW is “the return of professional wrestling.”

Sonnen also is slated to appear on the next season of the NBC reality show The Celebrity Apprentice alongside Snooki, Boy George and Jon Lovitz, among others. A date for the season premiere has not yet been set.

For more information on the Hall of Fame weekend, or to purchase tickets to the event, visit nwhof.org/waterloo.