Tragos/Thesz Hall of Fame has a ‘family reunion atmosphere’

From Iowa to New York, five devoted wrestling fans have made the trek to the George Tragos/Lou Thesz Professional Wrestling Hall of Fame since its inception in the late 1990s.

They’ve been involved since the days in Newton, Iowa, where the induction banquet once was held in a much-too-warm Holiday Inn right next to the swimming pool, making for a hot and humid evening. But for the past nine years, the hall of fame has been located in Waterloo, Iowa, where the five attendees diligently followed. 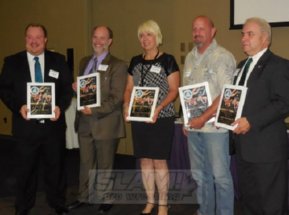 Tim Dalton, Chad Olson, Steve Schmitt, Joyce Paustian and Bill Murdock have religiously attended the annual event that has morphed into a reunion of sorts. But for Dalton and Olson, who have been friends since meeting at a gaming convention years ago, a reunion is the reason they began attending the hall of fame. Dalton, a New York native, said the simple fact that he loves “going out there” keeps him coming back year after year.

“I tell Kyle (Klingman, the hall of fame director) every time I’m out there, ‘I love this frickin’ place,'” Dalton said. “I’m a huge wrestling nerd. I know a lot of goofy things that nobody else knows, at least my run-of-the-mill friends.”

Even though that tradition began as a way to combine annual visits with Dalton, Olson said he also is able to catch up with Troy Peterson, a childhood friend and the promoter for Impact Pro Wrestling, who runs a show during the weekend.

“At this point, I think it’s almost like a family reunion atmosphere,” Olson said. “You see people (who have) come for many years, if not every year.”

As a longtime wrestling fan, Schmitt, of Milwaukee, Wis., said he always thought the industry “was lacking in ways of history” and honoring his heroes. That is, until the hall of fame emerged.

Though Schmitt said he knew what to expect the first time he saw the facility because of previous talks with Mike Chapman, the 2007 recipient of the Jim Melby Award, he wasn’t prepared for how far people would travel for the event.

Murdock’s involvement with the event began before its creation, helping Chapman kickstart the non-profit aspect of the hall of fame. In addition to Lou Thesz being a “close friend” of Murdock’s, the ability to connect his non-profit, Eblen Charities, with the event also played a role.

“I was very fortunate to meet them early on and get involved,” said Murdock, who travels from North Carolina for the weekend festivities.

Unique to the Tragos/Thesz Hall of Fame is its inclusion of both amateur and professional wrestling under one banner. Murdock said being able to honor inductees and the history of wrestling itself — along with the people he works with — are what keep him coming back. Looking at past inductees, such as Jack Brisco and Danny Hodge, he said so many “have had a tremendous amateur background.”

“Amateur wrestling was actually the outgrowth of professional wrestling, with Frank Gotch… The (Dan Gable Museum/National Wrestling Hall of Fame) bridged that gap between amateur and professional,” Murdock said.

Watching wrestlers walk into the museum for the first time is an experience on its own, according to Olson.

“It really meant a lot to Scott Steiner… To be there and see him get emotional, it’s something I would have never expected,” Olson said.

Because of the museum and hall of fame’s ability to connect the two sports, Paustian said “it’s a real honor” for inductees.

“When you look at the list of people who are in the hall of fame, it’s like a who’s who of yesterday’s old school wrestling in general and every one of them’s a star,” Paustian said. “It’s not something you can buy your way into.”

Dalton said he loves the history of the sport and that the hall of fame combines professional and amateur wrestling in an area where the amateur side “is such a big event.” It’s great to see a group, according to Dalton, that highlights the industry’s history through its inductees.

“I’m older, I’m 52 years old now. So I’m one of those that’s not a huge fan of the current product,” Dalton said. “I still watch it, still follow it… (but) the style was different, the presentation was different, and it’s just great to see a group that honors that era.”

Murdock said the hall of fame and museum are “second to none.”

“To see how it’s grown and the leadership that they have there has only moved the sport forward,” Murdock said. “(It provides) a lot more recognition for the wrestlers and the sport itself.”

For Schmitt, being able to honor the past and keep alive the memories of his childhood propel him to make the trip year after year.

“Lou Thesz and Verne Gagne… all those guys that have been meant so much to me in my youth that paved the way for today’s generation of wrestler and to honor them,” Schmitt said. “Oh my God, I don’t care where the museum would be.”

Paustian, a wrestling fan since the age of 11, said she “would have to be sick or dying” not to attend. It’s a combination of wrestling, old friends and new friends prompt the inevitable return.

“I just enjoy seeing all the memorabilia at the museum because it’s so hard to find any place where people remember how wrestling used to be before it became like it is now, to find old school wrestling,” Paustian said. “It brings back the real feeling of nostalgia and watching wrestling growing up.”