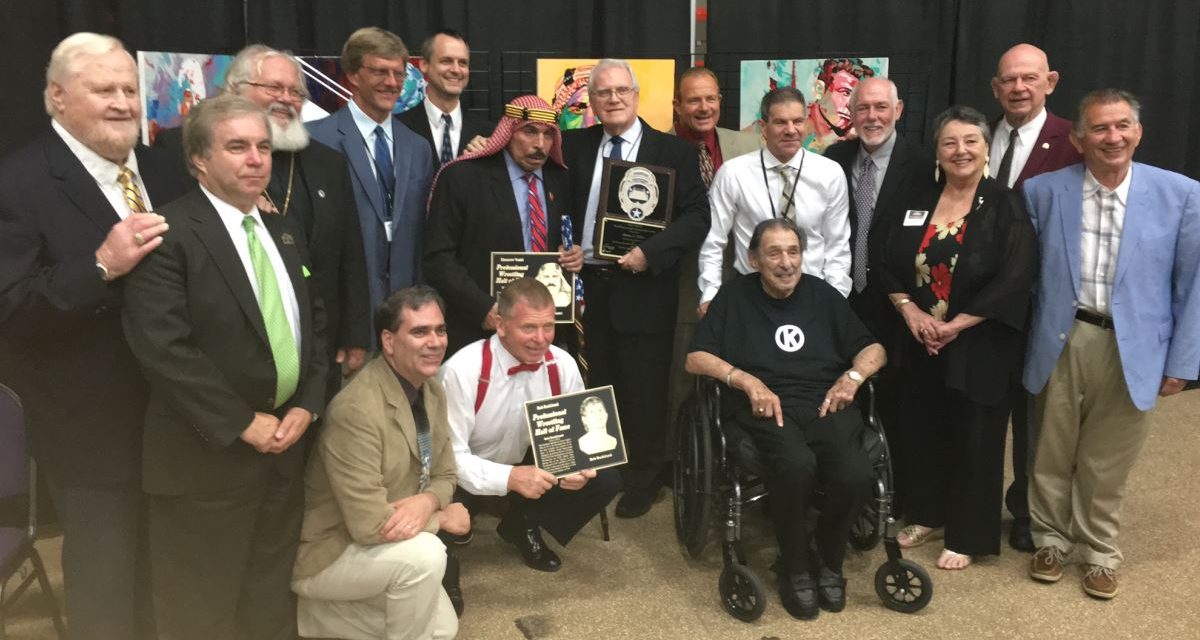 Over the last number of years, Bob Backlund and the Iron Sheik have gotten headlines for, well, odd and unpredictable behaviour.

But Saturday night, at the Five Sullivan Brothers Convention Center in Waterloo, Iowa, the former foes, inducted into the Tragos/Thesz Hall of Fame for their successes in amateur wrestling that contributed to their pro wrestling careers, were at their best. 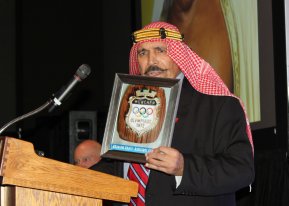 After being introduced by his nephew, Tim Backlund, the red-suspender-wearing Bob Backlund worked the room, slapping hands before reaching the stage. “What an honour, and it’s been a long time. Sometimes patience is a virtue,” began Backlund, who turned down the award a few times previously, believing himself unworthy.

“I owe my life to amateur wrestling,” said Backlund, who became an NCAA Division II champion at North Dakota State. At times, Backlund shouted and screamed, enthused by the moment and the principles he learned through amateur wrestling and the determination it takes to succeed. Taking the crowd through his career, he got to the pinnacle of the business as the WWWF World champion (beating Superstar Billy Graham and losing to the Iron Sheik), and how his “All-American Boy” persona was real, and that he spent so much time outside the ring helping others.

Khosrow “The Iron Sheik” Vaziri, closing the evening, was decidedly more “Koz” than “Sheikie,” surrounded by a few of his old trainees from when he was a trainer for an amateur wrestling club in Minnesota and trainer for the 1972 American Greco-Roman team at the Munich Olympics.

“I pay for my dues,” voiced Vaziri wearing his headdress and a suit, talking in his halting English, detailing his early days in Iran.

“Wrestling is my life,” he stated, his stories veering left to right, north to south, as he ran through many of his accomplishments. The stream of consciousness speech delivered obviously from the heart was amusing if dizzyingly hard to follow (“I mak-a long-a story short” he said three times).

It’s a blur to anyone who was there, but during his 20-minute speech he told off Hulk Hogan, expressed his love for his trainer Verne Gagne, called former arch-enemy Brian Blair his friend, explained how to set up a ring, talked of his embarrassment of being caught with drugs with Hacksaw Jim Duggan, and talked of the threats on his life during the tensions between the U.S. and Iran.

The third Tragos/Thesz inductee was Joe Blanchard, who died in 2012. Tully Blanchard accepted the induction of his father, along with his daughter, pro wrestler Tessa Blanchard. He turned the attention from Joe’s days as a pro wrestler to promoting in San Antonio, Texas, knowing that was where the money was, yet sharing 48% of the proceeds a year with his employees. He shared the story of Joe as a junior, losing in the Big 8 wrestling tournament, to Mike DiBiase, who had just returned from the war in 1946, and then four years later, winning the Big 8 championship over DiBiase. “There was one shooter in our family, and that was our dad,” said Tully, who was a quarterback at West Texas State instead of wrestling amateur.

“My dad loved this business,” said Tully, adding that when the San Antonio promotion faded out Joe ended up working for WCW setting up the rings.

The evening’s emcees were Baron Von Raschke and Larry “The Axe” Hennig, and they arrived at the stage to the pounding theme of Survivor’s “Eye of the Tiger.”

“The hard part is over, we ran the steps,” cracked Raschke to start. Hennig, sporting a huge cowboy hat, pretended to talk to Jim Ross (the originally scheduled emcee) in a mock phone call, called on the audience to acknowledge the WWE’s contributions, and included a shot at the late AWA promoter Verne Gagne.

Up first of the honourees in attendance was Dave Meltzer, the publisher of the Wrestling Observer Newsletter, who received the Jim Melby Award for his contributions to professional wrestling journalism. “My life would be completely different without Jim Melby,” said Meltzer, who sent in his original 1971 newsletter for Melby’s magazine and then received great praise encouragement from Melby. The Observer started in 1983, and again, Melby was supportive. “I was not the most well-liked man in this industry in the ’80s,” he cracked, reminiscing about finishing moves named in his honour.

The Lou Thesz Award, presented by his widow Charlie Thesz and Bill Murdock of Elben Charities, went to J.J. Dillon. Murdock called it “like the Nobel Peace Prize of wrestling.”

Dillon talked a lot about his career. “I’m the luckiest guy on the face of the earth,” he said, listing many of his accomplishments, including his Pro Wrestling Hall of Fame and WWE Hall of Fame rings. He teared up thinking about memories from attending the museum for the first time in 2015, and then hearing about his own award. He only ever met Lou Thesz once, in the ring, competing against him.

Lex Luger received the Frank Gotch Award and accepted it by video. Dressed in a Buffalo Bills hoodie, he spoke of the impact that wrestlers can have outside the ring. “I am deeply honoured,” said Luger.

Chael Sonnen was the winner of the George Tragos Award for his contributions to mixed martial arts. He could not be in attendance because of a funeral of a former coach. Gerald Brisco accepted on his award. Later, Meltzer also mentioned talking to Sonnen and how much he wanted to be there.

Long-time fan and photographer Joyce Paustian, who had a photo display up at the museum, also received a thank you plaque for her contributions through the years.

Kyle Klingman, who runs the museum, bookended the festivities and made note of the contributions of WWE, artist Rob Schamberger, and the many others who helped make the weekend happen. Cauliflower Alley Club president Brian Blair also got a moment on the podium to present a cheque for $1,000 to the organization.

Jason “The Wolfman” Sanderson and George Schire presented a special, unannounced award to Stan “The Big K” Kowalski on behalf of the Improved Order of Redmen, formerly the Sons of Liberty. It is called the Patriot’s Award, and was presented for the first time to “Krusher.”

The 90-year-old Kowalski, who served in World War II, had a long and successful wrestling career from the 1950s to the ’70s, including tag-teaming with Tiny Mills as Murder Inc., and 19 major titles, but the award was a recognition to his dedication to helping out American veterans. 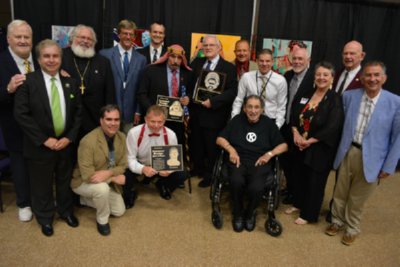 Other events during the induction weekend included a wrestling card by Impact Pro Wrestling, question and answer seminars about wrestling journalism and the Four Horsemen, an autograph session, and a podcast with both Backlund and the Iron Sheik.