JJ Dillon is rarely at a loss for words. On television, he was a mouthy villain as a wrestler, and then an eloquent orator as a manager. 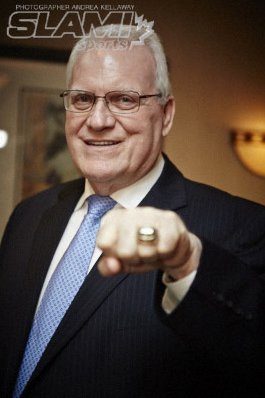 JJ Dillon shows off his Professional Wrestling Hall of Fame induction ring in May 2015. Photo by Andrea Kellaway

But the other day, when he got the call that he was receiving the Lou Thesz Award from the National Wrestling Hall of Fame Dan Gable Museum this summer, he was speechless.

“I’m at a loss for words,” Dillon over the phone Tuesday night, admitting that it “boggles my thinking” that he is getting an award with Thesz’s name on it.

He echoed the comments from the press release too — “I am overwhelmed. I am humbled. I am honored.” — but had obviously given his place in wrestling a lot of thought.

He was inducted into the Professional Wrestling Hall of Fame in May 2013. The WWE Hall of Fame honoured him as a part of the Four Horsemen in April 2012. The Cauliflower Alley Club presented him with awards recognizing his time as both a wrestler and a manager. The NWA Hall of Fame inducted him into its Class of 2015.

As great as those were, he was equally touched when the Pittsburgh-based Keystone State Wrestling Association inducted him into its hall of fame as a surprise. “The one banner was folded up, and they dropped me down,” Dillon recalled. Pittsburgh will always be special, he said, because he had his first televised match there, losing handily to Killer Kowalski, and his final match ever there only a few years back for a fundraiser for the local school for the deaf.

But he’s not in Dave Meltzer’s Wrestling Observer Hall of Fame.

“That’s okay. I’ve got two Hall of Fame rings,” quipped Dillon. “I’m not disappointed that I’m not in the Observer Hall of Fame, and probably never will be. I’m fine with that. I have noooo problem with that at all. I don’t consider that a slight.”

He’ll be able to ask Meltzer about it in person in Waterloo, Iowa, at this summer’s George Tragos/Lou Thesz Professional Wrestling Hall of Fame induction weekend, July 21-23. Meltzer will be receiving the James C. Melby Award for his contributions to professional wrestling journalism and Dillon will get the Thesz award. Other announced honourees include the late Joe Blanchard as a Distinguished Member, and Chael Sonnen is getting the George Tragos Award. The living inductee has yet to be announced, and the Frank Gotch Award honouree is still to come as well.

Dillon only got to the National Wrestling Hall of Fame Dan Gable Museum for the first time last summer for the induction ceremonies.

“I wrestled amateur in college because an oldtimer said, ‘Learn the fundamentals of amateur wrestling,’ which I did. And I wasn’t very good,” admitted Dillon, who brought his son, Geoff, to the museum. Geoff had lettered in amateur wrestling in high school despite a disability; “I knew it would mean something to him.”

Meeting Gable was a thrill. “Just like Danny Hodge, some of the toughest people in the world are also some of the humblest people. They don’t have to tell you what a badass they were, you know from other sources,” said Dillon, who bought Gable’s book and hung an inspiration Gable poster in his home — “Once you have wrestled, everything else in life is easy.”

He also met Charlie Thesz, widow of the late NWA World champion Lou Thesz, for the first time in Iowa.

He only ever met Lou Thesz once too.

It’s a story he has told many times.

“It was in Amarillo. I was having that run with [Dick] Murdoch and I was abusing referees and being my obnoxious self,” began Dillon. “When you’re running weekly towns, they booked Murdoch and I, and brought Lou Thesz as a special referee, a troubleshooter referee, to keep me in line. In Amarillo, the dressing rooms were opposite ends of the building, so prior to the match, I never saw. I actually saw him for the first time physically when I got in the ring and there he was, and he was introduced. In the course of the match, I remember it like it was yesterday, I had tossed Murdoch and had put a short-arm scissor on him, which, if you ask most guys today what that is, they would say, ‘A what?’ I cranking on that arm and Lou got down on all fours and went not that far in front of me and he made eye contact with me. He said, ‘Kid, that was my specialty.’ I remember that, this was probably 1975. Awww. I didn’t know whether to jump out of the hold or what to do. I am proud of the fact that I met Lou Thesz. Because of the way things were, I didn’t see him after, didn’t ever get a chance to talk to him, or get to know him on a personal level.”

Dillon doesn’t remember the finish, but figures he was probably decked by Thesz.

It really has been a lifetime in pro wrestling for Dillon (James Morrison), probably far longer than most people realize.

“I did it all. I sold programs just so I could get in. I helped tear down the ring when there was nobody left and they were shorthanded,” he recalled. ” Terry Garvin had some shows where they didn’t have a ring announcer, and I couldn’t very well go in the middle of the ring and do it because I was working at time, but I could do it from backstage on a mic. I don’t think that there’s anything that I haven’t done. I say that with a lot of pride. The original dream was to become a professional wrestler. I was a referee on a part-time basis for eight years, and there really was a time when I thought, ‘Maybe this is as far as it’s going to go.’ The Sheik came in, and in casual conversation, I told him my real dream was to wrestle. He invited me to come to Detroit and that was the next step.”

It took a while to become more confident as a wrestler — hence “Nature Boy” Dillon — but once he did, Dillon was successful in many promotions, from Florida to the Canadian Maritimes.

Become a manager, beginning the recently-deceased Archie “The Stomper” Gouldie, was a great fit.

After managing, he moved into legitimate management, running different aspects of the promotion for both WCW and WWF.

While he admits some people probably hold grudges from his job behind the scenes, he stresses that “it was my never because of malice of intent on my part.”

“In dealing with talent in talent relations, I always had walked a mile in their shoes, so even when I had to deliver had news, there’s good ways to do it and bad ways to do it,” he said. “I always did it with a thought in mind that I’d been in your shoes, and this is a hurtful conversation for me too. You know where I’m coming from and you know that I care about you. As a result, I had longevity on the backside of my career.”

The 73-year-old Dillon is hoping that the longevity keeps up as he makes the rounds this summer — CAC in Las Vegas, PWHF in its new home in Wichita Falls, Texas, Waterloo for the Tragos/Thesz induction weekend, the graduation of his youngest children from college. After that, he is facing a right knee replacement and then actual retirement from his day job.