BUFFALO, NY – The Nasty Boys have spent the last 25 years living up to their name in wrestling rings across the world, but they opened their hearts and gave to the people of Buffalo. On Saturday night SLAM! Wrestling caught up with the multi-time tag team champions and former WCW boss Eric Bischoff at the Legends of the Aud 20th Anniversary event at the Buffalo Riverworks.

The Nasty Boys, Brian Knobbs and Jerry Sags, have been involved in the charity event over the years that raises funds for the Ilio DiPaolo Scholarship Fund and the Children’s Hospital of Buffalo. The two burly grapplers came into town a few days early to help promote the event and help spread a little happiness when they visited families and children at the hospital. 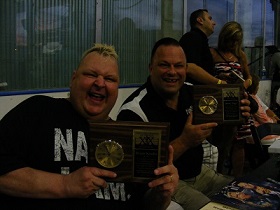 Knobbs and Sags looking (almost) as nasty as ever. Photos by Caleb Smith

“Yesterday we went to Children’s Hospital,” said Knobbs. “We went around and we really made their day. We were there about two hours and went around to see who we could. It was so gratifying to cheer a ten year old up, a five year old up. To see how sick they really are, it puts everything in perspective. You’ve got to give back, you’ve got to and Dennis (DiPaolo) is one of those guys who taught us that.”

Jerry Sags was overwhelmed by his experiences over the last few days. “It is sort of a double-edge sword because you know how important it is to go in there as a celebrity, whatever you are doing, sports, acting, whatever, but it is a hard thing at the same time,” said a visibly moved Sags. “We met a mom in there who started crying and she had her little baby in the unit there. At the same time she said, ‘You made my day by coming here.’ So, as sad as it is, it is something you have to do as a person to help people in need. If you can just bring one second of joy, you think, ‘Are my trials and tribulations that bad?’ Then you see a little kid going through chemotherapy or having blood transfusions it humbles you in a way. But if by us being there it can bring one second of glory to their day, puts a smile on their face one time for what they are going through, it makes life worth it.”

Dennis DiPaolo, son of wrestling great Ilio, was so moved by the support of the grapplers for the people of his community. “Being part of the wrestling family, the bond of the ring, wrestlers have always given back to the community,” said DiPaolo. “We are so proud of the family tradition and giving back to the community and we want to sustain that, keep it going forever.”

Eric Bischoff was in charge of WCW when they first teamed up with the DiPaolo family to promote the charity event many years ago. “It all started with Dennis DiPaolo and a guy who used to work for me named Zane Bresloff who happened to cross paths and make a good connection, put the event on here and had a blast doing it. I am very proud to be a part of it 20 years later,” recalled Bischoff.

When asked why he would return to be a part of the 20th anniversary of the wrestling and charity event Bischoff was moved by the positive actions of others. “I really respect people, families, who give back to the community, support their community,” said a serious Bischoff. “Dennis DiPaolo and his entire family and Ilio when he was alive was such a part of the community and did so much to support it. Having the opportunity to be a part of it is something I’ll always do if given the opportunity.”

I pointed out to Bischoff that people bought tickets to meet him. That they put down their dollars to see him and in turn those dollars would send a kid to university or help a family at the Children’s Hospital and yet he would never see the return. How did he feel about sending out good karma to the universe, knowing that he helped people he would never meet? His eyes watered and he needed a minute to compose himself and soon he resumed talking in an emotional, heartfelt way.

“My wife is a very spiritual person and she reminds me every day that it is the little things you can do in life that even though you don’t recognize it or its not obvious can change other people’s lives, sometimes in small ways, sometimes in a big way,” said Bischoff. “I am just very grateful to be remotely in a position to have any kind of a positive impact on any one. It is a blessing and I am grateful for it.” 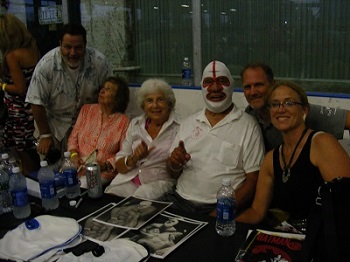 The Destroyer shares the moment with his family

The legends of the Aud 20th Anniversary committee handed out awards to the Nasty Boys, Dick “The Destroyer” Beyer and Eric Bischoff for their contributions to their cause over the years. Lanny Poffo accepted the Hall of Fame award for his brother Randy “Macho Man” Savage. Poffo recited the poem he used to induct Savage into the WWE Hall of Fame to express his families’ appreciation for the award. 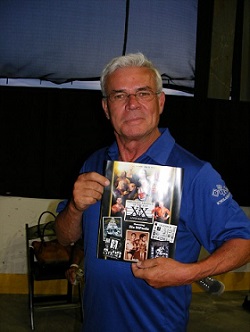 Wrestling was the entertainment of the night and the young grapplers of the area put on a fabulous show. Bischoff took the time to provide pointers for the wrestlers. “One of the things I really miss about the professional wrestling business is, to me wrestling is an art form,” said Bischoff. “It is no different than music, acting, being an actor on the live stage. I appreciate having the opportunity to be able to give an insight to someone who is trying very hard to perform. You can’t see yourself when you are out in that ring and performing, you don’t have a mirror, you can’t see every aspect of what you are doing. So, sometimes you just need someone who is honest and supportive to give you perspective and be that mirror so to speak. It is something I enjoy because I can break down a match, a wrestling match. I can break down an interview in the ring. At least in my own mind I feel I can isolate things that can be worked on and improved upon, some things that can perhaps been eliminated from a repertoire and modified. Every performer, whether you are an actor, actress, musician, every artist needs that feedback to improve that craft.”

The Legends of the Aud 20th Anniversary event was a great success for the Buffalo community. Dennis DiPaolo should be proud about the good he has done for his home town in his father’s name.

Caleb Smith thought that Dennis DiPaolo put on a first class event and that he and his committee should be commended for their amazing work.