Buffalo legends event gives back to the community

The greats of the squared circle return to Buffalo for “Wrestling Legends of the Aud 20th Anniversary” on July 23rd. It is an event that brings out the best in the wrestling community and in turn gives back to the people of Western New York. It all started 20 years ago as a tribute to wrestling legend and philanthropist Ilio DiPaolo.

“The first sporting event held at the Aud (Buffalo Memorial Auditorium) was promoted by Ed Don George and it was wrestling,” said the Dennis DiPaolo, son of Ilio DiPaolo. “We closed off the Aud with Ilio DiPaolo Legends event in 1996 and raised over $100,000 for the Children’s Hospital and the DiPaolo scholarship fund.” 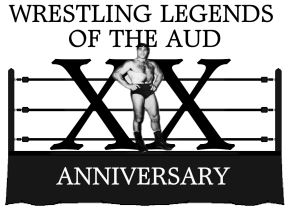 Through the years the DiPaolo family teamed up with World Championship Wrestling four times to raise funds for deserving charities and young people, an example of giving set by Ilio DiPaolo before his death in 1995. “Over the four legends events we have raised over $350,000,” said Dennis DiPaolo. “It is an awesome feeling to know that my father’s name still carries a lot of weight in the community. He always told us that as your success grows so should you give back to the community.”

Outside of the wrestling themed events, the DiPaolo family has raised over $1,000,000 for charities and the scholarship fund. “My father said that we should support the less fortunate and reward the future leaders of our community.”

The July 23rd event at the Buffalo Riverworks, which starts at 5:30 p.m., will see a blending of local talent and legends who worked the ring at the old Aud. Greats such as the Nasty Boys, Jimmy “Mouth of the South” Hart, Shane Douglas, Lanny Poffo and Eric Bischoff will all lend their experience to the show. Wrestling legends Dominic Denucci and “The Destroyer” Dick Byer were great friends of Ilio’s and are adding their presence to the show. Other special guests include current and alumni members of the Buffalo Bills and Buffalo Sabres.

One of the big matches that evening will see Bill Collier challenge Team Canada leader and North American champion “The Professional” Jaxon Jarvis. A few weeks ago Jarvis interrupted the media kick-off for this event running down the city of Buffalo and their beloved Bills. Soon enough former Bills quarterback Jim Kelly chased off Jarvis and Team Canada.

“I am going to put my massive opponent, ‘Big Time’ Bill Collier, through some ‘Big Time’ pain, by locking in The Professional Clutch and emerging as Buffalo’s one true hero, and continuing my legacy as the greatest sports icon this city has ever known,” boasted Jarvis in an exclusive interview for SLAM! Wrestling.

Also that night, “The Macho Man” Randy Savage will be inducted into the Ilio DiPaolo Legends of the Aud Hall of Fame. “Randy Savage was such a key contributor to the scholarship fund. He gave his time to all of our events. Both he and his father Angelo,” said DiPaolo. Savage’s brother, Lanny Poffo, will induct do the honours.

“This event is a great tribute to what pro wrestling is all about,” said DiPaolo. “It is about giving back to the community. It is awe-inspiring.” Tickets and event information can be found at buffaloriverworks.com. VIP reception tickets are $40, ringside seats are $25 and general admission entrance is $20.