Trish Stratus’ career defined by not being ‘just eye candy’

Trish Stratus never dreamed of becoming a professional wrestler. She didn’t know it was a career option. But her seven years in the industry, culminating with the Iron Mike Mazurki Award from the Cauliflower Alley Club in April, prove she broke barriers and became a mainstay in the “Golden Era” of women’s wrestling and popular culture as a whole.

“It reminds me of when Vince McMahon pulled me aside,” Stratus recalled at the CAC reunion, “which was really scary, because you’re never sure what he’s going to say. You don’t know what kind of day he’s having. So he comes to me, ‘I hear that the girls are stealing the show.’

“So this is what I said. I don’t know what came over me, it was maybe a combination of fear or I just couldn’t take a compliment or nerves, I don’t know,” she said, putting her hand to her mouth and ear like she was on the phone. “‘Hello, 911. I’d like to report a robbery. It looks like the women have stolen the show.’ … He just said nothing and stared and me, and it was pretty weird. And then he did his laugh, ‘Hah, hah, hah, keep it up, kid.'” 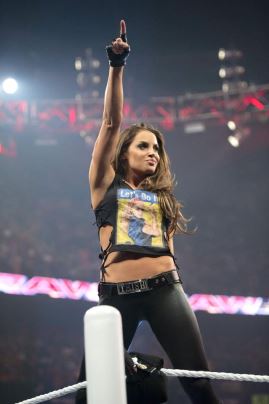 Patricia Stratigeas’ initial career plans focused on becoming a doctor, but her fitness model career took off in her early 20s and through a series of events spurred by the Canadian sports talk show Off the Record, she ultimately made her way to the wrestling industry. Once deciding to make that transition, Stratus said she didn’t want to be “just eye candy.”

“I wanted to show them what I was capable of, because I’m an athlete first and foremost. I played soccer till I was 21 years old. I was on the varsity field hockey team at my university. I’m a fitness model. I train. I’m an athlete. So if i’m going to be in there, I want to be viewed as an athlete,” Stratus told SLAM! Wrestling.

It was at that point Stratus met Ron Hutchison, her trainer and a CAC board member, after which she ultimately landed a WWE contract. Stratus’ distinction as the first woman to receive the Iron Mike Award is “very gratifying,” according to Hutchison.

“No offense to current WWE storylines, but I think that the Divas Revolution started with her entry onto the scene in 2000,” said Hutchison, who will present Stratus with the honor in April. “Trish burst onto the scene and, together with Lita, shortly thereafter, not only helped raise the bar for women’s professional wrestling matches and women’s professional wrestling in general, but she also helped a lot of young women find their places in the sport.”‘

When Chyna left WWE in 2001, thus vacating the Women’s Championship, Stratus said understood that she would become Women’s champion. But she didn’t think she had ‘made it.’

“They were basically giving me the ball, and I still couldn’t believe it,” Stratus said. “I’m in with these really good wrestlers, all more experienced than me, and so I went in as this underdog, and at that point, it was up to me to nail this opportunity. I can’t say there was one single point that I knew this is it, but I think it was just a cumulative effect — it was like, the more minutes we got for our matches, the more time we got with our backstories and backstage segments, the more reactions we got from the crowd, and suddenly we were there. We knew we were getting there. We knew were getting through to the crowd. We knew we were changing the dynamics of women’s wrestling.”

And those dynamics were never clearer for Stratus than in a hardcore match against Victoria, which Stratus believes was the first chair shot in a women’s match. It was at that point that “We Want Puppies” chants morphed into “Holy sh–” chants.

“It was a serious, ‘Holy sh–,’ moment… Suddenly we were getting the same opportunities as the male superstars, like being booked in hardcore matches and people were getting with us and going crazy for our matches,'” Stratus said.

Prior to that program with Victoria, Stratus said she felt was still “getting there” wrestling wise. Stratus said Jazz “was an amazing teacher,” along with Molly Holly and Ivory. Ivory would “tell me how it is.” Molly essentially helped Stratus become a wrestler. And when she worked with Jazz, Stratus said she had a “good foundation.” 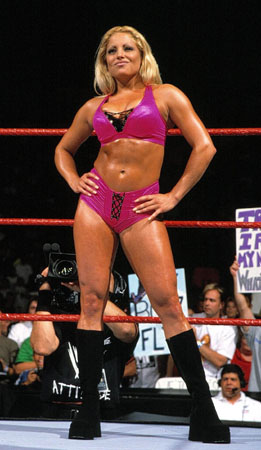 “She was powerhouse and I was this underdog and that told such a great story,” Stratus said. “We were able to do some great things with our storyline, and that was probably my first series of really solid real matches that I could be proud of. I can look back and go, OK, those are real matches. That’s legit.”

But Jackie Moore “got (her) real green.”

“She kicked my ass, and I will be forever be thankful to her,” Stratus said. “I would almost sometimes feel bad, almost like, ‘Sorry you have to work with the sh– girl,’ (meaning me), but she was totally cool … She was very professional and knew she was a veteran even at that point, and she was just doing what the company wanted her to do. If the company wants her to try to work with this girl and make her look good in the ring, she did just that. She was a tremendous help to me in getting a good foundation.”

As she came through the rankings, Stratus said it eventually came to a point where the women were “an equal character on the show.” Stratus worked with the likes of Christy Hemme, Mickie James and Lita.

“We were at that point where the audience was like, ‘Cool, women wrestle like the men do and we can’t wait to see what they’re going to bring,’ rather than trying to reeducate them and trying to push for an extra minute. It wasn’t like that anymore… We got to the point where we were just another segment on the show — not a girls segment, if that makes sense,” Stratus said.

Hutchison said Stratus proved that it’s possible for women in the squared circle to have both beauty and wrestling acumen.

“Trish’s biggest contribution to the wrestling industry is that through her hard work and dedication, she not only became a huge success, but she was able to pave the way for other young women who actually wanted to wrestle and not just be ‘eye candy,'” Hutchison said. 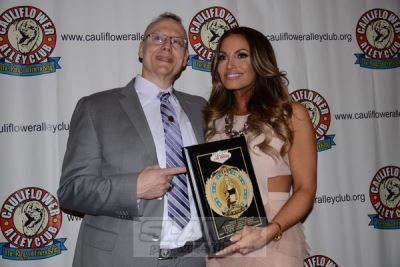 For Stratus, receiving the Iron Mike Mazurki award recognizes how women wrestlers “did make a difference back in the day,” as she and her counterparts worked to “show that we were part of the boys club” and could do more than was expected. Proof that the “Golden Era” divas did just that is evident in storylines, ratings, increased female demographics and the legacy they left, according to Stratus.

“Now in the current landscape of women’s wrestling, thanks to the training, they can just bring a woman in and put her right into the spotlight, and it seems like we’re on the cusp of another era of great women’s wrestling,” said Stratus, who received the award — which recognizes an individual with a prominent wrestling career, who took that visibility and catapulted it into successful ventures post-wrestling — at the CAC reunion at the Gold Coast Hotel & Casino in Las Vegas in mid-April.

The mother of one had the opportunity to see that era unfolding when in 2011 she served as a trainer on WWE Tough Enough. The Diva of the Decade said the show was “a great opportunity to give back all this good that I had learned along the way.” The set up of Tough Enough, with coaches, a training facility and living in close quarters was “like a small microcosm of what happens now,” according to Stratus.

“They have the Performance Center and most of the up and coming talent live in the Florida area and they all do their training there and… have the trainers and promo classes. It’s pretty incredible the system they have built to develop talent and, obviously, we’re seeing a difference.”

The difference is especially evident in the women emerging from NXT, Stratus said. 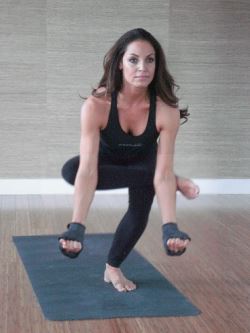 “It’s like they’re breeding these girls quietly, these women wrestlers in some secret laboratory and then it’s like, ‘Bam! Here we go,'” Stratus said.

Stratus said while she rose quickly in her career, she learned on the road, but because of the opportunities afforded through the Performance Center, the NXT women have “done a million promos and they’ve performed in front of a crowd,” in addition to watching their matches back.

During her CAC acceptance speech, Stratus also noted a shift in the current WWE women’s division, specifically due to the retirement of the Divas Championship and return of the Women’s Championship.

However, Stratus did not discount the crop of women in TNA’s Knockouts division, where former WWE stars Gail Kim and Mickie James reside.

“There’s been solid women’s wrestling in TNA for a long time, which people don’t often recognize,” Stratus said. “So I think for them too, they have some solid workers who all, what I know about them, the girls that I know, it’s a real tight family, and I think that makes a difference in their performance when you have that camaraderie and when they support one another and be each other’s cheerleaders.”

Through her career, from the days playing wrestling with Barbie dolls as a youngster and looking up to women like Wendi Richter to becoming a “real-life superhero,” Stratus credits many people — but dedicated the Iron Mike Award to her father, who passed away last year.

“I was his little tomboy,” Stratus said during her acceptance speech, “and he’s watching me now in Heaven. He would have been so proud to see me receive this award, to see me, his little girl, accepted into the boys’ club.”