TORONTO – There are times when WWE is very aware of the world around it, as in its Tribute to the Troops or campaigns against breast cancer. Then there are nights like Saturday in Toronto, when it was oblivious to the chaos outside the doors of the Ricoh Coliseum.

With a triple-threat of events going on within a 10-minute walk — a Keith Urban concert at the Molson Amphitheatre, a Toronto FC soccer game at BMO Field and WWE’s SummerSlam HeatWave tour — all affected by thousands of lost parking spots by the infrastructure set up for next weekend’s Honda Indy, WWE’s venue wasn’t even half full when the show started.

There were 3,000 or so in their seats when The New Day’s Big E and Xavier Woods beat Erick Rowan and Braun Strowman. There were no doubt hundreds and hundreds more who came in later, like the people behind me, extremely disappointed to miss the New Day schtick.

If ever there was a time to call an audible, and switch up the card to a more traditional opener to warm up the late-arriving crowd — like putting the meaningless Sin Cara and Titus O’Neil victory over the Social Outcasts (Bo Dallas and Curtis Axel) on first. 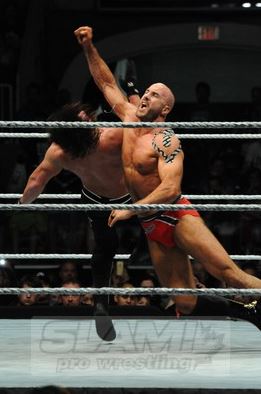 Fortunately all were in their seats for the real highlight of the night, though, and that word “traditional” comes up again. The AJ Styles win over Cesaro was a throwback in so many ways. Unlike, say, The New Day (there they are again) who seem more about product placement than wrestling, Styles and Cesaro delivered a classic old-school bout, which went back and forth and told a story. When former WWE referee and current Aftermath pundit Jimmy Korderas says “I’ve never seen that before,” you’re on to something. For the move in question, Cesaro attempted to leap frog over Styles near the ropes, and The Phenomenal One sort of stood and knocked Cesaro askew, leading to Cesaro apparently landing wrong on his knee. But more importantly, Styles saw that and attacked the knee, and proceeded to work on it the rest of the match. Even after AJ won with a Pele Kick followed by a leaping forearm, Cesaro continued to sell the knee. Kudos to both.

As for the main event, Dean Ambrose defending the WWE championship against Seth Rollins, it had the inevitable task of not only following Cesaro-Styles, but since it was getting later in the night, there were some who left early to avoid traffic issues (pretty sure that didn’t work), or wanted to get home in time to see UFC 200, with Brock Lesnar against Mark Hunt. At one point, Rollins was frustrated with his inability to win back the title, so just walked out with the belt. Without much explanation, he stopped midway to the exit, and returned to the ring, where he had a tug-of-war over the belt with the referee; when the ref managed to wrest the title back, Rollins was rolled up by Ambrose — but the ref was slow in returning. In the end, Rollins fell victim to a bulldog out of the corner (and nowhere) from Ambrose, who stuck around at least 10 minutes visiting fans at ringside.

The other buzz for the night was the official confirmation that WWE Survivor Series would be in Toronto at the larger Air Canada Centre on Sunday, November 20th. There were hundreds in line for earlybird tickets at the Ricoh box office at the end of the show (and the pre-sale code is WWEPPV if you want to go to Ticketmaster).

Here are the results from the WWE HeatWave stop at the Ricoh Coliseum in Toronto on Saturday, July 9, 2016:

Greg Oliver went to the show with his nine-year-old son, Quinn, who has asked to see King Kong Bundy in action since the infamous “five count” demand came up.