How the Dublin Destroyer broke into acting

Brian Donahue made a living for himself by taking bumps inside the wrestling ring, usually as the Dublin Destroyer. He was so good at it in fact, that he was able to use it as his meal ticket to Hollywood. Just ask him.

“The best compliment I ever get is when I hit the ground at the end of a fight scene, and the director yells ‘Cut!’ And then you hear people say, ‘Is he okay?'” Donahue told SLAM! Wrestling. “You’re lying on the ground with a little smile on your face, ’cause you know you’re okay. You’ve been trained to know how to take a bump.”

The 53-year-old remembers his childhood quite fondly. And now that he has children of his own, he’s able to appreciate it a lot more.

Donahue grew up in Boston, and his love of wrestling all started in his pre-teen years. He was a star athlete, so it only made sense that he would follow a lot of sports as well.

“I was probably around 10 or 11 years old, and my uncle Frank, my mother’s brother, he used to take us into the Boston Garden, and we would see the matches there. I didn’t know what I was seeing at first, but it was exciting. You feel the buzz from the crowd and the whole excitement; that drew me in big time,” Donahue said. “This was the original Garden where you had Bobby Orr and these guys playing hockey and winning championships, and the original Celtics, where you had Larry Bird and such.” 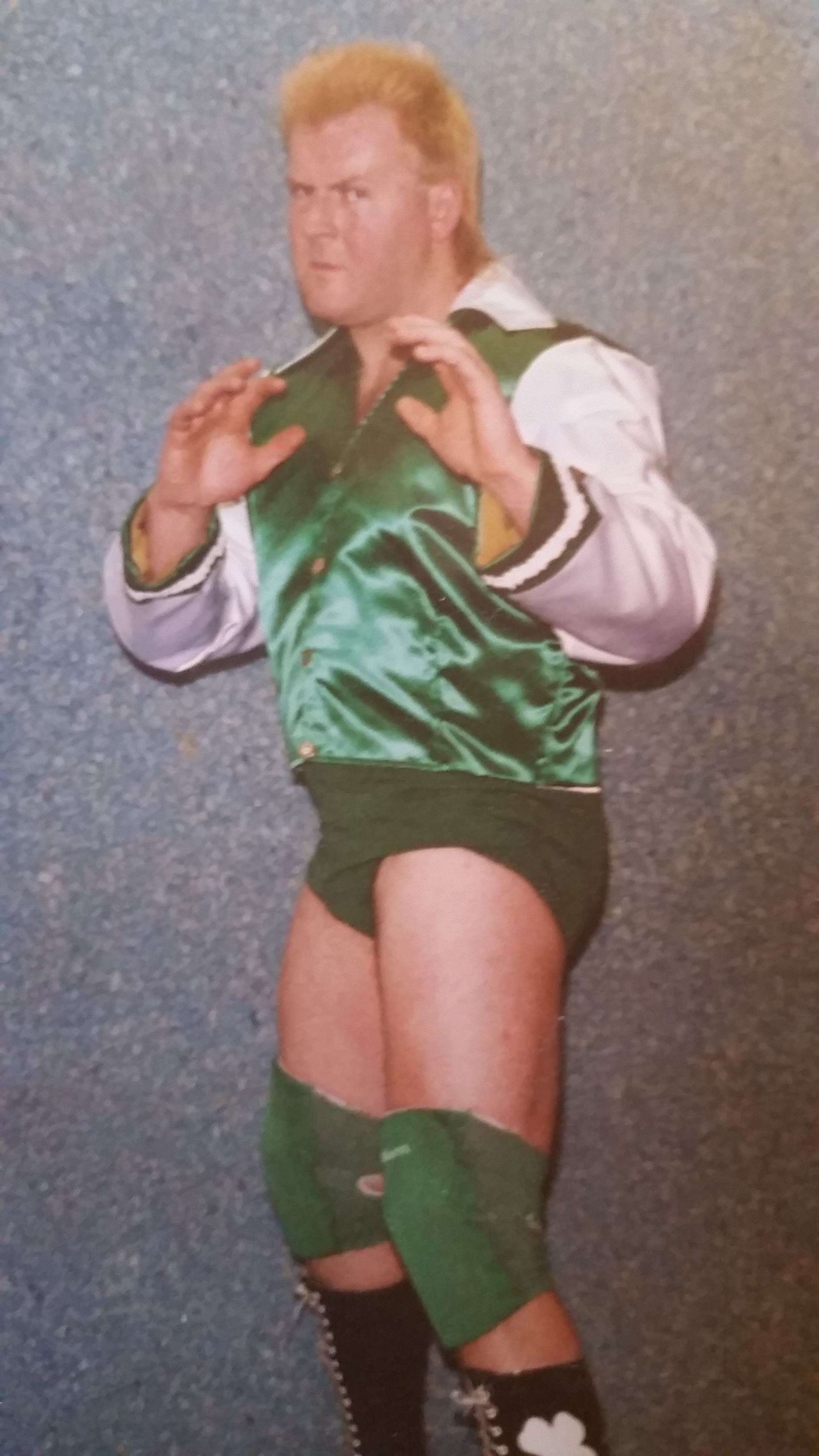 Brian Donahue as the Dublin Destroyer

As he got older, Donahue focused most of his attention on the sports that he was actually playing. While he still followed wrestling, Donahue never really considered it as a career option at the time.

“I come from an athletic background, and I was a football player. And actually before that, I was a world class track and field athlete in shot put and discus throwing. I ended up going to the University of Texas, where I played football and did shot put,” Donahue said. He’s still in the Top 10 for shot put as a Longhorn for a record he set in 1982.

Being a three-sport athlete like he was, Donahue really had to be in incredible shape. Not that he wasn’t already, but Donahue knew that if he wanted to stand out from the crowd, he’d need to throw farther, run faster and hit harder than any of his teammates. This would prove to be so much more important in his later years.

And it seemed like with every passing year, Donahue had accomplished something greater than the previous year.

“I began training with the U.S. Olympic Committee. While I was at a track meet in New York, I was doing drills and plyometrics, curls and such, and doing wind sprints, and I caught the eye of a gentleman who happened to be one of the coaches for the Jets,” Donahue said. “They called me in for a tryout, and I signed with the Jets in ’86. Then I ended up playing for the Toronto Argonauts, but due to an ankle injury, I didn’t last too long.” (He just attended training camp in 1989.) 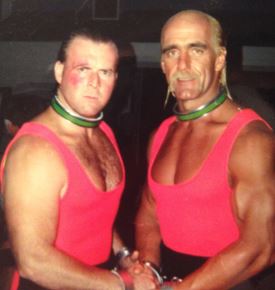 Donahue and Hulk Hogan on the set of Thunder in Paradise.

The football injury was a bit of a setback, but Donahue never let it deter him. When he returned to the States, Donahue was still in such great shape that people around him started to take notice. Little did Donahue know that this would lead him to something even bigger.

“When my football days were over, I came back to New York, and someone said to me, ‘Have you ever thought about giving pro wrestling a try?'” Donahue said. “I ended up going to train at a small facility here in Long Island with a gentleman named Mark Kendall. He was a worker with the boys, back with Bruno (Sammartino) and Chief Jay (Strongbow) and these guys. So he started training me and I started working with different people such as Jules Strongbow, who were teaching me about all the ins and outs of the game.”

Donahue quickly discovered that if he really wanted to perfect his craft, he couldn’t do it in one place. He knew he would have to learn from several different people in several different facilities. So off he went again.

“I spent some time in the International Wrestling Federation with the Savoldi brothers. Then I ended up going to UWF with Herb Abrams,” Donahue said, who used the Brian the Basher name. “Then I ended up getting a call from the WWF.”

It was almost like a dream come true for Donahue. He never expected to ever work for the WWE, but it was one of those once in a lifetime opportunities that he just had to jump all over.

“Terry Garvin got in touch with me, and I got to meet a lot of the greats like Pat Patterson, and I spent a couple of years there. It was a great experience with them, and you know, travelling across the country, and basically giving 200 per cent every match, and they took good care of me,” Donahue said. “I would come up to the facility which they call ‘The Warehouse’ up in Stamford, which was about two miles from the actual corporate offices. And they were gracious enough to actually let me train in the warehouse with a ring set up. I would go there and work, and when the guys would come in, like Macho Man, Ric Flair, Kerry Von Erich and such, they would come in to do TV interview tapings and different spots. So that was a couple of nights a week.”

While Donahue was more of an enhancement talent at the time, he still truly felt like he was one of the boys, because they made him feel like family, and it was almost as if he never left home.

“I was based locally, but I travelled pretty excessively with them,” Donahue said. “I never had a contract as a full-time roster guy; I was more of a freelancer. But they took a liking to me, because I was the guy that would always sell and could take a good hit.”

Speaking of families, Donahue was very close with his. But he never realized until working there, that some of the wrestlers in the WWE were also very family-oriented. 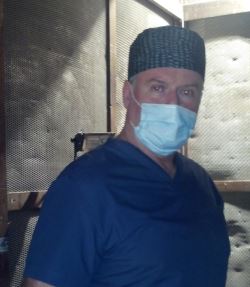 “Kerry Von Erich, The Texas Tornado, he was very friendly on the road, and as I said, I was around these guys a lot. I was friendly with everybody, but certain guys I was closer to than others. And I remember having my wife and daughter on the road with me up in Canada, and we were in Hamilton. We were backstage, and my wife and daughter were there, and we did Ottawa, Hamilton and Cornwall, I believe, and Kerry Von Erich came over, and my daughter was five years old at the time, and she was playing with her Barbies and her dolls,” Donahue said. “I turn around and look back, and Kerry Von Erich was sitting at the table with my daughter, playing with the Barbies and talking to my daughter, and I was like, ‘Wow, this is a legit tough guy, and he’s sitting there playing.’ Then I was told by The Big Bossman and a couple of the other guys who were friendly with him that Kerry had daughters that were around my daughter’s age, and with him being on the road, needless to say 360 days a year, he didn’t get to spend as much quality time with them as he would have liked, so this was basically bringing him home a little bit. And then of course, years later, Kerry unfortunately went to wrestling heaven, but there are little things like that, that are touching, when you see these big, tough guys with bigger hearts.”

Once Donahue’s run with the WWE had ended, he started heading further south, where he would find his true calling.

“After my wrestling days were over, and that would be the early ’90s, I ended up going down to Walt Disney World. I had already started doing commercial work and small parts in film. I was under contract with Disney to do the live Indiana Jones show,” Donahue said. “So I took my wrestling background and parlayed that into a stuntman career. While I was there, I met up with a couple of gentlemen that were running shows down there, and Hulk Hogan was also there at the time doing a show called Thunder in Paradise. I went in and I worked about seven episodes out of a 13-episode season, and that went great, and it parlayed into other jobs.”

Like Donahue said, his experience at Disney ended up leading to much bigger things, and he ended up doing a lot more stunt work than he had hoped. 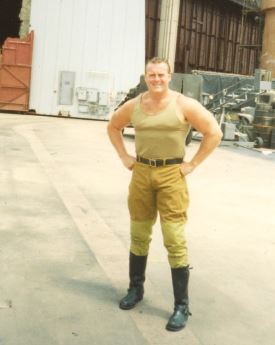 On set and in shape.

“After a couple years at Disney, I came back up to New York. In New York, I was doing a lot of freelancing in film and TV work. I found that the athleticism that went with the sports world, and also with the WWF and the stunt world, I was able to combine all of it, and then started taking acting classes. I started doing some theatre at the time as well,” Donahue said.

In all his years as a stuntman, Donahue has built some strong professional relationships with most of the people that he’s worked with, and he’s received positive feedback from industry professionals such as stunt coordinator Manny Siverio.

“He’s very balls-to-the-wall. He’s very, and I say this as a compliment, but he’s very anal, meaning that he always pays great attention to detail, and does what you ask him to do. And at the end of the shoot, he always asks for any notes or if there’s anything else that he could do, or that he can add to it,” Siverio said. “The first time I hired him, it wasn’t to have him double anybody, but just do work as himself, as an individual. He basically played himself, you know, being a goon, or a tough guy at a bar or something like that. He’s a very imposing, big person. He could be a very intimidating individual, but in reality, he’s a teddy bear.” 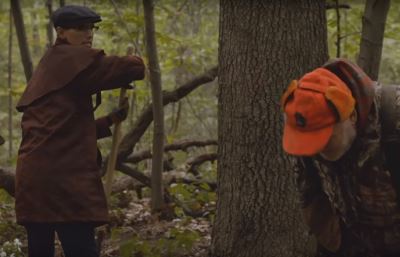 Brian Donahue is about to run during an episode of Gotham at the hands of Edward Nygma (Cory Michael Smith).

After all these years, Donahue is still in great physical shape. He stands 6-foot-4 and weighs in at 280 pounds, and because of all the bumps he took in the wrestling business, Donahue is able to make all of his stunts on movie sets look much more realistic, which probably puts him at a distinct advantage over most guys in his line of work. But Donahue always remains humble about that.

“I’ve done soap operas with a bunch of guys who are more handsome than they deserve to be, and the women are beautiful. And then there’s me … the tough guy … the wrestler,” Donahue said. “I looked like a parade float walking on the set.”

Donahue just celebrated his 30th wedding anniversary with his wife Lori on July 12, and though he has seemingly done everything that he has ever set out to do, he hopes to accomplish a lot more in the coming years.