Mat Matters: When a photo says everything

There are times when a photograph says everything about a person. To me, that’s the photo reproduced here of Natalya stopping to visit with a fan ringside. The joy. The happiness in doing what she loves. The genuineness of it.

And, having known Nattie Neidhart for many, many years now, it’s a pretty good representation of who she is too.

She loves what she does. Visiting with the fans, before shows, after shows, during shows, isn’t just a task to her, but something she values. Similarly, if there’s a charity event. 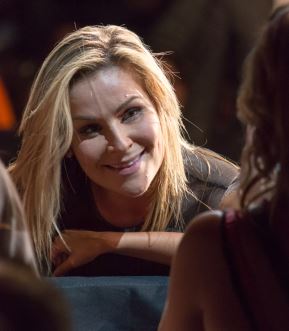 Natalya stops to visit with a fan at Budweiser Gardens‎ in London, Ontario. – Tabercil Photography

This shot, taken post-match after a loss in a Women’s title match against Charlotte, was captured by Jon Crowhurst of Tabercil Photography last Sunday, July 10th, at Budweiser Gardens‎ in London, Ontario, but it could have been anywhere.

Just a couple of days before, when WWE was in Oshawa, Ontario, a friend named Tor, who may be confined to a wheelchair, but does not let that define him, posted on Facebook: “MY WISH CAME TRUE WHEN I JUST MET NATTIE!”

Not WWE champion Dean Ambrose, not The New Day, not John Cena, but Nattie, a third-generation wrestler from Calgary who hasn’t forgotten where she came from, who knows that the ride could be over tomorrow and that she’d better enjoy it while she can.

One of the few others that I could compare her to would be Tyson Kidd, i.e. her husband T.J. Wilson. And, the sad reality is that his ride might just be over as an active competitor in the ring.

Here in Canada, there’s often talk of how the national women’s team in hockey or soccer inspires kids, especially young girls, and makes them want to be strong individuals, both in character and in health. And it’s definitely not just girls; when we got FIFA 2016 here in the house, my son was thrilled that he could play as the Canadian women’s soccer team, led by Christine Sinclair, one of the best in the world.

By just being herself, and taking the time to share a moment with a young fan, Nattie is doing the same thing, just perhaps on a smaller scale.

Like many people, I’ve enjoyed the resurgence in her career, as she’s able to truly be a woman wrestler and never quite fit with the diva label. I told her as much when she recently celebrated her birthday.

But I also never heard her publicly whine or moan about her status when there were people who couldn’t lace up her boots at the top of the women’s division in WWE. That is also to her credit.

To sum up, the world needs more Nattie. And great photos.