Fleming’s take on wrestling makes for a great read

Unlike many other wrestlers whose stories have been published under the Crowbar Press imprint, Mark Fleming is not a household name for many fans. He claimed neither the fame nor the titles of Ivan Koloff, Jack Brisco or Lou Thesz, often serving instead as a prelim attraction for Crockett Promotions during the 1980s. However, the story of professional wrestling does not begin and end with its “world champions.” Fleming’s story, It’s Wrestling, Not Rasslin’!, is an interesting one, and his autobiography, written with Scott Teal, is well worth the read. 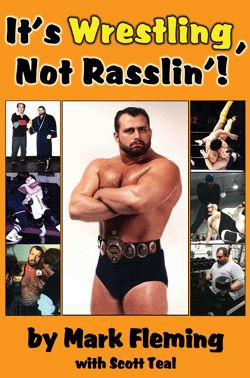 Much like the aforementioned Brisco, Fleming got his start with amateur wrestling before turning to the pro ranks. Even before he hit the mats in Junior High, though, he already had dreams of turning pro. Both his early professional aspirations, as well as his amateur career, are documented in detail. Accordingly, readers who enjoy amateur-to-pro reminiscences, such as those offered by Jack Brisco and Bob Backlund in their autobiographies, will enjoy the first few chapters.

During the territory era, many wrestlers hopped from promotion to promotion across the country. Their growth as performers was shaped by the smorgasbord of experiences that came from wrestling not only a variety of different athletes, but appearing before crowds with very different tastes and working for promoters with very different approaches to the business. Fleming, however, did not adopt the vagabond lifestyle, and stayed close to home for most of his career. Accordingly, his wrestling experience was molded less by the varying experiences offered by the patchwork quilt of the American territorial system, and more by the key figures who guided him into, and through, the business. First among them were the Anderson “brothers,” Ole and Gene.

Fleming began his career by taking part in one of Ole and Gene Anderson’s infamous “tryout sessions;” a harrowing experience that he recounts in vivid detail. His narrative highlights not just how tough the workouts were but also, on a larger scale, how difficult it was for total outsiders to break into the business during the kayfaybe era. His overall assessment of the Andersons is certainly double-sided: although he passed their test for entry into the business, their gruff dispositions both before and after the experience don’t appear to have earned them inclusion on the author’s list of dinner guests.

The second, and certainly most profound, influence on Fleming was Lou Thesz. Fleming met Thesz when the author was already almost five years into the business. Thereafter, the multiple-time world champion became the guiding figure in his career. As Thesz enters the picture about halfway through the book, the focus shifts from road stories and other assorted tales of Crockett Promotions to the interpersonal relationship between the two, including their training sessions, running a wrestling school, and travelling to Japan.

It is evident, that through Fleming, Thesz sought to re-institute his own vision of professional wrestling: one that eschewed gimmicks and returned to the notion that the art was, fundamentally, an exhibition of wrestling skill. If you go on YouTube and watch some of Fleming’s matches, especially those from the short-lived North American Wrestling Association promotion, you can’t help but get the impression that Fleming probably would have flourished not just in Lou Thesz’s heyday, but in the era of Ed “Strangler” Lewis. There is little question that, to this day, Fleming’s views on professional wrestling are shaped by the mentorship he received under Thesz, and that perspective colors much of his narrative, including the very title, of the book.

Backed by his solid amateur wrestling credentials and additional training in catch wrestling under Thesz, Fleming goes on to recount his experiences in the land of the rising sun working with Inoki’s New Japan promotion and, perhaps more significantly, with the fledgling “shoot-style” movement. It was with the latter that, arguably, Fleming made his greatest impact on the sport. His reminiscences on the Japanese scene and the characters he met while overseas, such as the hard-living and hard-fighting Gary Albright, are especially colourful. Further, his insights into the interpersonal dynamics/rivalries between UWFi figureheads and wrestling masters Dan Hodge, Lou Thesz and Billy Robinson are informative and even at times comical.

With a few exceptions, which include an ex-wrestling school student or two, a couple promoters, and the ever-divisive Dusty Rhodes, Fleming does not set out to “bury” many people in the industry. That is not to say, however, that his book is not controversial, and how a reader will take this book very much depends on where on the professional wrestling spectrum they sit.

For a bonafide wrestling purist who holds to the notion that pro wrestling should be first and foremost wrestling, some of the tone in his book will read like veritable call-to-arms. Competitive amateur and submission wrestlers will also enjoy his stories about training with the late, great Thesz.

For ‘rasslin fans, the insight he provides into the operations of Mid-Atlantic during its waning days, including how cards were booked and structured, will prove insightful, even if Fleming’s philosophy on wrestling, articulated most intensively in the latter half of the book, falls on unsympathetic ears.

Those who prefer sports entertainment, though, and could care less about a wrestler’s actual ability to ‘go’ on the mat, might find themselves a bit at odds with Fleming’s take on things at times. They will likely see both he and his legendary mentor as anachronistic.

Like all Crowbar Press books, It’s Wrestling, Not Rasslin’! is profusely illustrated. At 183 pages, it is relatively short by Crowbar standards. But, again, like all Crowbar releases, it is highly detailed and the typesetting is tightly spaced, meaning that 183 pages would probably come out to well over 200 if printed under another publisher’s format.

Fleming’s book is an enjoyable read that offers unique perspectives. Although not all will share his vision of wrestling, nobody can come away questioning his love for the business or, more specifically, his devotion to the science of wrestling. The general tone throughout bespeaks a man who legitimately enjoyed his time in the pro ranks, harbours few regrets, and was honoured to share the squared circle with many of the greats of the 1980s and early 1990s, even if the promoters did not always “put him over” on the cards.