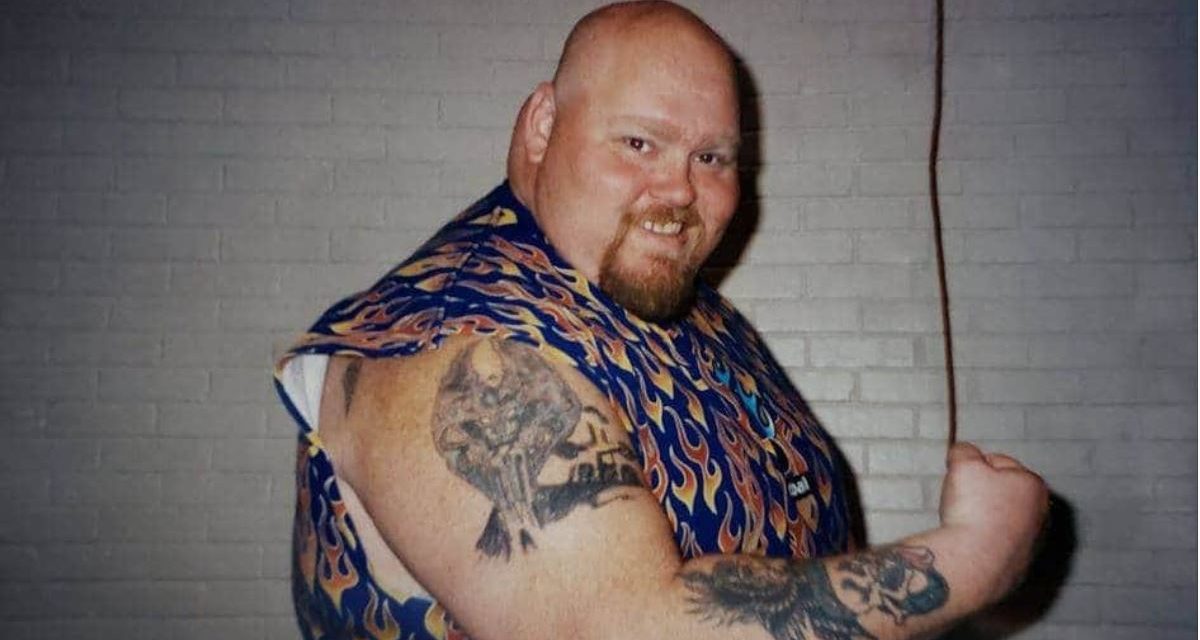 Pro wrestling is full of bigger than life characters and personalities. On July 28, 2020, the world of wrestling lost one of its biggest when 400+ pound Walt McDonald — a.k.a. Big Slam — passed away after a long battle with multiple health aliments.

There is little doubt that Walt McDonald, born April 21, 1966, was born to be a pro wrestler. A big kid already in his early twenties, he sought out Philadelphia wrestling legend Larry Winters to train him. Winters helped get McDonald booked for the new Tri State Wrestling promotion in Philadelphia.

Dressed in a pink body suit, Walt debuted as Crybaby Waldo. Though at first he was just in battle royals, soon Crybaby Waldo was meeting top stars like Bam Bam Bigelow and JT Smith. When Tri State Wrestling morphed into Eastern Championship Wrestling (ECW), Crybaby Waldo was part of the early days and had matches with Glen Osbourne, CN Redd and Mr. Anthony. Plus, he was in the mix of the initial ECW World title battle royal, a semifinal competition won by Superfly Jimmy Snuka, who’d eventually be ECW’s first champion.

In 1993, McDonald moved to North Carolina and immediately hooked on with several independent promotions, where he changed his name and gimmick to Big Slam.

As Big Slam, he was a major indy star in just about every independent promotion in the Mid-Atlantic during the 1990s.

I first met him in early 1994, when he came into Carolina Championship Wrestling Alliance and quickly won the heavyweight title. It was here that he would start a long indy feud with wrestling legend Wahoo McDaniel. Big Slam battled Wahoo all over North and South Carolina and Virginia and held his own against the legend.

When I started promoting Southern Championship Wrestling in late 1994, Big Slam was a major part of it. He held the SCW title, North Carolina title and was a multiple time tag title holder with various partners.

Later in the 1990s, Big Slam started running his own shows in the Goldsboro area of North Carolina, under various banners including SCW and IPWA. Slam became a master of selling shows to car dealerships and mobile home sales parks. Over the years he would bring in Tom Brandi, Greg Valentine, Barbarian, Buddy Landell, Ricky Morton, and other big names for these shows.

With a striking resemblance to WCW/WWE star Vader, McDonald got a Vader mask and also worked as Big Slam Vader or Super Vader.

As the new decade began, McDonald got engaged to long-time sweetheart Michelle Ferry and in 2001 they married

Returning to the Philadelphia area, McDonald competed on the Philly and New Jersey indies., and started his own promotion, Slam Championship Wrestling, based in New Jersey. He also became involved with Doc Diamond’s Training school (formerly The Monster Factory) and helped train the young aspiring wrestlers of the next generation.

In 2003, Big Slam appeared on the final Southern Championship Wrestling show in Durham, NC, at the Bethesda Gym, the same building I first met him in 1994.

While living in New Jersey and now married and soon to be the father of a son, Walter McDonald III, Walt supplemented his wrestling by continuing to work as a cook and also as a stage hand at all the major concert venues in the Philadelphia area.

In recent years diabetes, heart disease and other ailments caught up with McDonald and his wrestling days were over.

“Walt McDonald aka Big Slam Vader, my partner, my brother, & my long time friend, you’ve suffered long enough and now you’re in a better place. Do me a favor, give King Kong Bundy a big splash one more time from both of us. Love you big man, rest easy!” said long-time friend Tom Brandi.

Matt Bowman, aka Wise Guy Jimmy Cicero said, “RIP Big Slam… one of my best buddies for the last 25 years. I probably wrestled against Slam 200 times (and my record against him is 0-200)… so many great memories. I’m very sad that he left us, but so grateful to have been privileged to have him call me brother for all these years.”

Slam’s life was like how he told you a wrestling match would go — “You go in do the deal, boom boom boom, get the heat and take it home.”

Well Big Slam, you have finally taken it home one last time.