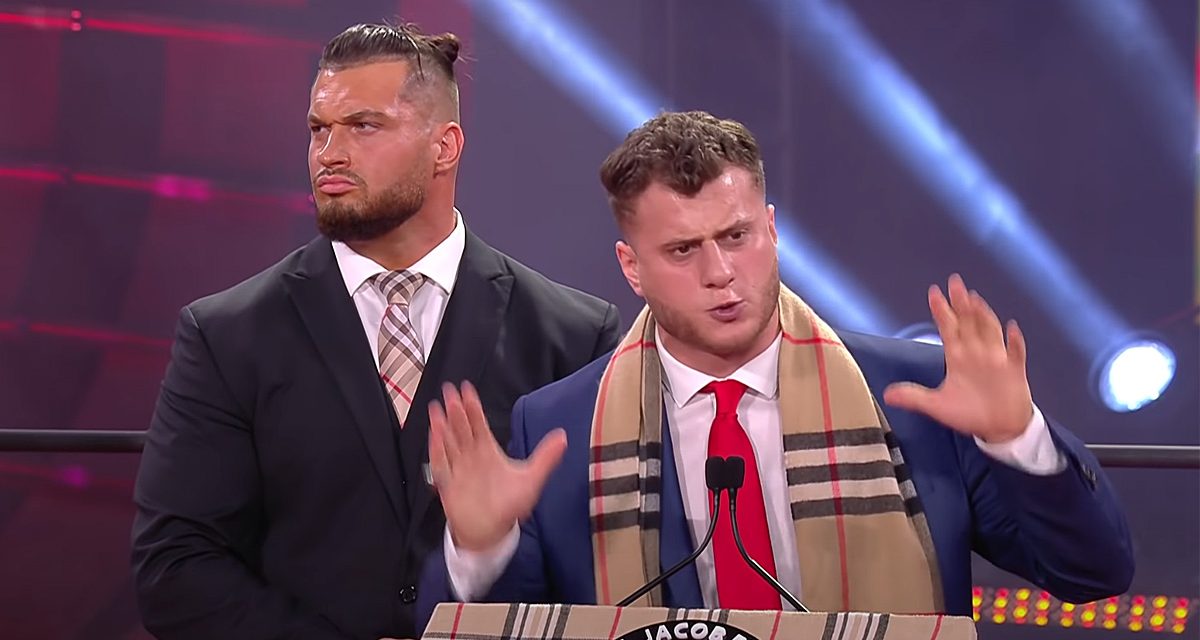 Does it feel like AEW Dynamite is treading water just a bit? Part of it can’t be helped, because every show is held at Daily’s Place for the time being. The other part is that AEW pay-per-views only come every few months, which is largely a positive but also leads to stretches where it’s hard to make individual episodes feel special. We’ll see if tonight’s edition can rise above, as we go live to Jacksonville on TNT, with Jim Ross, Tony Schiavone and Taz on the call.

In this case, the “& Friends” refers to Jungle Boy and Luchasaurus, and Taz says he likes the chemistry between the five faces and likes their chances to win. A face at the table but a heel in the ring is the wrestling version of gentleman in the streets and … well, you get the idea. Jim Ross and Tony Schiavone wax poetic about how one can properly officiate a 10-man tag match, saying all you can really do is wave your arms when things get chaotic. Marko Stunt gets thrown back and forth between Luchasaurus and Jake Hager and is stoked when he’s suddenly the only man left standing. No one can accuse AEW of not giving this one enough time to play out, and the last-minute intervention of Matt Hardy allows Luchasaurus to pin Sammy Guevara. “Welcome back,” he waves from the stands.

Jon Moxley has a simple philosophy: If you leave him alone, he leaves you alone. I’m not 100 percent that’s true, but we’ll say it is for now. He doubles down by saying he doesn’t start fights, he finishes them, and he’s ready to finish the fight with Brian Cage and Ricky Starks for attacking him and Darby Allin last week.

If you’re not familiar with the work of Mr. Warhorse, he’s like if someone combined the DNA of the Ultimate Warrior and the lead singer from a late ’80s metal band. Props to the announcers for taking things to their logical extreme and noting that if Warhorse wins, the TNT champ will be someone without a contract. I mean, that technically could be true. There’s some old school, classic stylings to Warhorse’s work as well, so it’s pretty appropriate that he ends up tapping out to a Figure Four. I continue to enjoy the special guest challengers, so let’s keep them coming.

Two members of the Dark Order jump Cody after the bell, but he’s got a friend to bail him out: Matt Cardona, the artist formerly known as WWE superstar Zack Ryder. Woo, woo, woo, you know it.

Schiavone heads to the ring to talk about All Out, but the Demo God leads his cronies back out to express their anger with Hardy and Cassidy. Jericho talks up his rematch with Cassidy in two weeks and claims after he wins it, Freshly Squeezed will hand him $7,000 for the jacket he ruined. Before we get there, he’s going to debate Cassidy, which should be riveting. We also learn that Jericho’s jacket now smells like cat pee, so there’s that.

Because Schiavone is a busy dude, Schiavone was also on hand earlier in the day for the FTR contract signing. Arn Anderson comes in and looks over the clauses, which include tag ropes (just for their matches!) and a Tag Team Appreciation Night on Aug. 12, hosted by FTR. Once the signatures are on the papers, Hangman Adam Page shows up with whiskey for all.

If you enjoy the art of longform wrestling storytelling, you have to appreciate the Page and Omega saga. First it looked like they were an odd couple who might cause friction within The Elite, and as soon as they looked to have settled that, Page found apparently kindred spirits in FTR and now there’s tension among the tag champs again. Quality stuff. Colt Cabana is with the announcers and informs them he is just “hanging out” with the Dark Order for the time being. The Dark Order duo really hasn’t had much of a chance to show their stuff on Dynamite recently, so you forget how good they are together. It matters not in the end, though, as the champs retain.

After the bell, Mr. Brodie Lee ushers his two newest recruits away so they don’t see him smack around Grayson and Uno. Page’s laughing draws even more of Lee’s ire, and he summons a lot more minions to attack from all sides. The Young Bucks reinforce the champs, as does FTR, and that’s enough to repulse this particular attack. To be continued, one assumes.

The Roll Model herself, Dr. Britt Baker, has something to say to Big Swole. She’ll let Swole get a shot at her, but only after defeating an opponent of Britt’s choice.

A video package allows Diamante to tell us a bit more about herself before she tackles Hikaru Shida in a non-title bout. “The pressure makes diamonds,” she reminds us in Spanish.

I’m not sure I like the idea of having Shida take a loss just so Diamante gets a contract, but we’ll have to wait to see how this plays out. Maybe if there are hijinks of some sort … Nope. Shida wins in fairly quick fashion. That’s logical but doesn’t help Diamante very much. Makes me glad I’m not a booker.

The draws are underway for the women’s tag team tournament, and Nyla Rose makes her color selection. It’s purple, if you’re tracking that kind of thing.

If there’s a red carpet in the ring and flags flanking a podium, it must be time for MJF’s State of the Union address. I can’t really do his speech justice, especially with his copious humorous WWE references, but his platform is anti-Mox. Can that be a thing? Anti-Moxxers? MJF says he’ll be the man to lead AEW for the next 25 years, and he won’t rest until the promotion stops patting itself on the back for being an alternative and becomes the pinnacle of pro wrestling. He finishes by announcing his candidacy for AEW World Champion by challenging Moxley to a title match at All Out, though we’ll have to wait and see if Jon accepts.

Allin doesn’t come out when his music hits, giving Taz and Starks time to cut some promos. Not Cage? Come on, don’t kid yourself! Alas, as soon as they put their microphone away, Allin leaps from the top of the entrance set and gets things going in style. Jim Ross asks who the legal men are, apparently forgetting this is tornado rules. All is forgiven, J.R. The end comes in violent fashion, with Allin coming off the top turnbuckle to grind his thumbtack-spiked skateboard across Stark’s back, bloodying him in the process.

Taz is beside himself, and Allin points at Moxley’s title. They’ll go head to head for the belt next week, so that’s a definite reason to tune in, which is kind of what we were talking about back at the start. See you in seven!

Give this one a half star more than last week because of better in-ring action overall and the sense that things are finally building to a between-PPV crescendo. Next week’s show looks like it could be even better.