This Saturday night, “Crowbar” Devon Storm will be competing at Tommy Dreamer’s House of Hardcore event in Philadelphia. The former WCW Hardcore Champion could be facing off against any one of the myriad of hardcore specialists that have been announced for the show. But no matter how extreme the match may be, no matter how hard his opponent hits, no matter how much pain he may endure, it’s going to be a walk in the park compared to last weekend.

“It was two days of sheer hell,” he told SLAM! Wrestling on Sunday night during a break in the move. “I was moving my business — a physical therapy clinic. Just getting here and setting up the new equipment, it was just nuts. It was like any move, just larger. Plus, we had the constraint of knowing that we had patients coming in on Monday morning so it had to get done.” 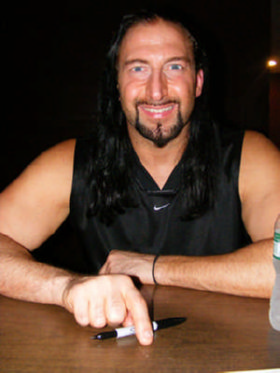 Devon Storm / Crowbar at a fan fest in 2009. Photo by Christine Coons

Though Storm (real name Christopher Ford) still wrestles on the occasional show, running the clinic is his full-time job. In fact, working as a physical therapist actually pre-dates his WCW career.

“I’ve been doing it for 15 years, and actually was going to physical therapy school during my first WCW stint. I was doing some Saturday night shows and some Nitros. I met Dallas Page and he took a liking to me. At one of the final Nitros I’d done, he told me, ‘You have a lot of talent. But if you stick around here, you’re just going to get typecast as a job guy. Go finish up school, and when you’re finished that up, get back in touch with me, and if I can get you a spot, I will.’ After I graduated, I worked in the field for about a year. I sent him a tape, and that’s how I got in down there.”

“Even when I was working there, when I was home, I always worked in a hospital or at a health shop as a per deim physical therapist, so I always kept my hand in it. At the time, I thought that my wrestling career was going to last a lot longer at that level than it did. But it’s amazing how stuff works out.”

When he decided to start up his own practice, Storm found that his wrestling career paid unforeseen dividends.

“There were a lot of doctors at the hospital that were closet wresting fans, and they would see me there, so I got to know a lot of them. When I opened up my own practice, it was real easy to go up to these guys and let them know I had opened up my own practice, and (get) referrals. As opposed to doing a cold call to a doctor who doesn’t know you from Adam. In a really weird sort of way, wrestling has helped me so much — it’s given me so much.”

It’s given him enough that Storm doesn’t have to work wrestling shows if he doesn’t want to. He has the financial freedom to only accept shows that he wants to do — as opposed to some of his former peers who still toil it out on the independent scene and live show to show.

“I really created a unique situation for myself,” he said proudly. “I see so many guys out there on the independents and some of them can’t do anything else to support themselves. When I was out there in the independents — and even to some extent when I was in WCW. I never understood the pressure that a lot of the guys were under. Back then, I couldn’t understand why a lot of the guys there, and even a lot of the guys on top, were miserable. In hindsight, I was naïve. Now, I see that if you had to depend on that to support yourself, how there’s a lot of pressure. Between getting hurt, or getting stabbed in the back through all the politics, it’s a lot of pressure; even if you’re on top, in a split second, something could happen and it’s gone.”

Because he had something else to fall back on if need be, Storm was able to avoid that kind of pressure and simply enjoy the experience he was having.

“I was like a kid in a candy store,” he said happily. “I had fulfilled my dream, I was on TV a couple of times a week. I held some belts, which is something that I would never have even fathomed I would be able to do. I worked Terry Funk at Starrcade, which was nuts. The whole time, I was having a great time.”

And while he still enjoys being in the ring, the reality is that Storm is cutting back on the number of shows that he does now.

“When I do a show, I’m doing it because I love it. But I don’t do a lot of the smaller shows in the area — actually I’ve drastically cut back. I recently did the TNA Hardcore Justice 2 pay-per-view. I did the Extreme Rising show. And I’m happy to do House of Hardcore.”

What’s particularly appealing for Storm about those shows is the fan base.

“I love that extreme, hardcore, ‘smart-ish’ crowd,” he explained. “It’s like the Rocky Horror Picture Show. You’re giving them energy, they’re giving it back, and it’s just a blast. The Philadelphia crowds or the same smart New York crowds — they’re very unique and fun to be in front of.”

In fact, it was that same type of crowd that pulled Storm away from the brink of retirement last year. He had contemplated hanging up his boots for good, but the Philadelphia faithful convinced him otherwise.

“It was at the first Extreme Rising show,” he recalled. “I was supposed to work 2 Cold Scorpio, and I was really excited about that. But then things happened, Sabu got messed up, (Justin Credible) got messed up, and then I wasn’t sure who I was working with. Ultimately, it became a singles match between me and Jerry Lynn. We were going through the match, and I told him, ‘Jerry, this is probably going to be last match. I can’t think of a better way to go out. We’ve got a great crowd out there, and I think after this, I’m done.'”

“At the beginning of the show, we had seen the size of the crowd and saw that it was a huge crowd, and they were rabid — they wanted to see wrestling, they were chanting, they were going nuts. But after that, we were downstairs for the rest of the show and we couldn’t really hear what was going on. We finally go up for our match, and we hadn’t known that the show had basically fallen apart. We go up, and people are chanting ‘this show sucks’ and we’re trying to figure out what’s going on. I couldn’t figure how that crowd that was so hot and rabid for a hardcore extreme show ended up like that. Me and Jerry go out there, and the crowd reacted — they had a great time, they were chanting and screaming and really reacting to the match. And halfway through that match, I said to myself, ‘nah, you’re not done yet.’ It was the most fun I’d had in years.”

He’s confident that the crowd on Saturday will be just as motivating.

“I have a strong feeling that the show is going to draw that same kind of audience. There’s an audience that wants to see this kind of product. I’m sure that the people are going to be there and be ready for that kind of a show. People talk about the ‘ECW experience, the Philly experience.’ It was that experience that convinced me not to hang it up. And I think they’re going to have that same experience at this show.” 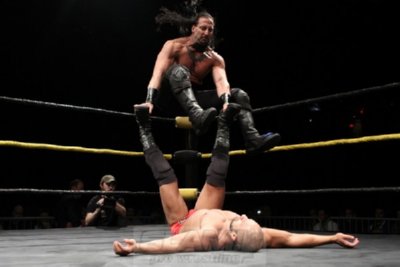 “The first House of Hardcore event was awesome,” he continued. “Tommy runs things top-notch — the guys know that and the fans know that. I told him on many occasions that if he was running anything, I wanted to be a part of it. That it would be an honour to allow me to be on his show. To be on House of Hardcore 2 in Philly is as much entertainment for me as it will be for the fans. I know it’s going to be successful. He’s going to give them the show they want to see. Hopefully I can show them something that they like.”

STAR WARS NERD
When Devon Storm isn’t wrestling or working at his physical therapy clinic, chances are he’s doing something Star Wars related. He’s described himself as being the world’s biggest fan of the movie franchise.

“Last weekend — I had been wanting to do this for the past ten years — I packed up the family and went down with a co-worker and his wife, and we went down to Orlando for Star Wars weekend. I marked out huge. It was totally awesome. I saw the parade every day, I went on the rides, even just walking around and seeing the characters, I had a great time.

“When I just got out of WCW, I got all these calls to go to these conventions — like, comic book conventions with the actors there, and toy-cons, and merchandise, and they’d also have wrestlers there — a real ‘geek-a-thon’. I would go there, and I would bring my pictures and everything else, and I would blow all the money I made there on Star Wars toys. I would go home in the hole with 8x10s with random actors who played the Imperial Commanders and stuff that nobody even knew. I was (appearing at one of) these conventions with Balls (Mahoney) and a few of the other guys, and I’m going nuts. Balls got mad at me, and said to me, ‘You can’t be a mark for these guys. We’re all here as entertainers, you can’t make us look underneath them.’ I bought an 8×10 of the guy who played Greedo — the guy who was under the rubber mask. But I didn’t care, to me that was awesome.”