Erin Angel has just spent three weeks wrestling straight through for Atlantic Grand Prix Wrestling. Before she headed back to her native England — where he is competing for the Bellatrix British title on Sunday — Erin took the time to share her memories of her second tour of duty in the Maritimes.

It’s her second tour of the three provinces on the east coast of Canada that make up the Maritime provinces: Nova Scotia, New Brunswick and Prince Edward Island. She was on a similar tour in 2008. 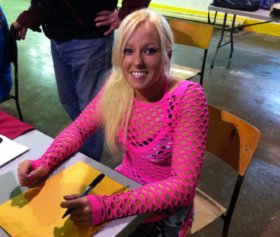 Erin Angel was the top merchandise seller for the first few weeks of the Atlantic Grand Prix Wrestling tour.

“When I came back after the 2008 tour, wrestling five weeks, a month of wrestling makes you so much better — more agile, your training has gone up, your in-ring ability, everything,” she recalled. “When I came back the last time, I got a lot more bookings, and obviously having my name associated more with North America added quite a lot of interest — but I’ve yet to come to America. I’m sure this time around, it’s going to lead to good things for me in wrestling.”

Has it changed in five years?

“It has and it hasn’t,” she said. “It’s everything I remember and more. The people are fantastic, the people are really good. Everyone’s so friendly. I think we’ve visited a few different places that weren’t on the tour last time. It was nice to experience that as well.”

The other woman on the tour for the last three weeks has been She Nay Nay (Athanasia Alexopoulus of Ottawa, Ont.).

“She’s a very hard worker. We’re quite similar in height and in build and everything, so we’re quite equal in that sense. Getting to work somebody like that every day, hard-working, it really keeps you on top of your game in wrestling,” said Angel, who is 4-foot-11, and about 120 pounds. “I’ve definitely improved a lot from this tour, and that is obviously from wrestling with She Nay Nay.”

Does it get repetitive working with the same person night after night? “Each show is a new thing, a new crowd. We keep on top of our game, we change it around, really test ourselves in there. You get the opportunity to step it up.”

Working in the smaller towns around the three provinces puts the wrestlers up close and personal with the fans, many of whom have been coming to Atlantic Grand Prix Wrestling for years. “I’ve met people on this tour that have been following Atlantic Grand Prix Wrestling for 30 years — that’s longer than I’ve been alive!” laughed the 26-year-old Angel, who has been wrestling since she was 16 years of age, debuting in 2003.

Merchandise sales are a big part of the tour. “I think I’m the best seller, which is great, obviously. That means people are out there, enjoying what we’ve done and not been disappointed,” said Angel. “There’s something for everybody on this tour. The girls have done really well. We’ve sold a lot of merchandise, done a lot of pictures, I’ve done a lot of pictures with children, with guys and girls as well. That’s great, I love all that, I really do. A big part of it for me is meeting all the fans and having that interactive time.”

Angel has also gotten a chance to spend some time with Ron Hutchison, the Toronto trainer of Edge, Christian, Joe E. Legend, Trish Stratus, Gail Kim, and more, who has returned to the ring to celebrate 30 years since his first tour of Atlantic Grand Prix.

“To have his influence and advice on hand for the last 22 days, and he’s watched our wrestling, that’s amazing. What more could I want?” said Angel. “I’ve wanted to meet him and pick his brains and get all the information that I can from him. He’s trained so many people are been such a part of their success.” 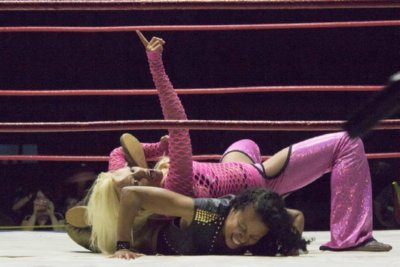 Erin Angel goes for the pin on She Nay Nay.

Hutchison has indeed been watching the girls wrestle from under his hood as the Masked Thunderbolt.

Both Erin and She Nay Nay have been working their butts off day in and day out on this tour. Their work is second to none both male or female,” Hutchison said. “Erin hits moonsaults with ease and has an appreciation, respect and thirst for this business that should be mandatory for anybody wanting to enter it. I’ve never heard her complain at all and it has been a joy for me to meet, watch and have her a part of my 30th Anniversary comeback tour. Be it in Europe or any place else in the world, wrestling fans, wrestlers and the powers that be should be keeping an eye on Erin Angel. They won’t be disappointed!”

Back in England, she is Erin Marshall, a part-time sewing teacher from Monday to Wednesday, leaving her Thursday through Sunday to be Erin Angel, wrestling across the United Kingdom, and into Europe.

“Ideally, I would want to be wrestling all the time. Doing tours like this, it really gives you so much enthusiasm to try and make your dream come true, and see if could be a reality all the time,” she said.

This weekend, she challenges Rhea O’Reilly for the Bellatrix British championship belt. The Bellatrix Female Warriors promotion is similar to SHIMMER, SHINE or Femmes Fatales, in that it showcases women’s wrestling. Period.

With O’Reilly having already been to the United States to wrestle for SHIMMER, Angel is hoping a good show — maybe even a win — will help her standing. “I want the exposure from wrestling with her to help me get over,” she confessed. “I’d love to work in SHINE, work for Lexie [Fyfe], and SHIMMER as well would be brilliant. SHIMMER is a big goal for me.”

Bellatrix is a growing presence, she said. “They’ve started to do a lot of i-pay-per-views, so a lot more people around the world are able to see what you’re doing. Hopefully that will give me some exposure to America.”

René Dupre, the promoter for the Atlantic Grand Prix Wrestling tour, is decidedly a fan.

“I met her about five or six years ago, and saw something special instantly,” said Dupre. “The Maritime fans love her and the American companies should take notice. I wish her nothing but all the success in the world.”