Simon Diamond has a problem

Simon Diamond has a problem. Namely, the Notre Dame football team changed coaches twice this past month, and he wasn’t even considered for the job. But things aren’t so bad… after all, he’s always got his wrestling career to fall back on.

“My dream job,” he told Slam! Wrestling at a recent Border City Wrestling show, “other than wrestling, of course, would be something with Notre Dame football. If they called me up tomorrow, you’d never see me again. That, or if I won the lottery.”

Those are the only circumstances in which he can see himself leave the wrestling business, barring a career-ending injury or old age. And even then, he would still want to be involved, albeit in a less physical manner.

“I like the business too much, I don’t want to get out. If my career’s over, I would eventually like to get behind the scenes or become a commentator. 95% of what I do is with my mouth anyway.”

That formula, Diamond’s stress on his vocal skills rather than his physicality is no accident. It’s one in which he has made a name for himself. Plus, as an added bonus, it helps assure his longevity in the game. 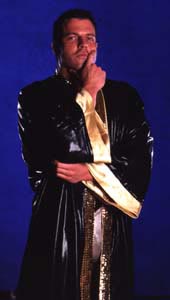 “My basic blueprint is a little promo, I throw a few arm-drags, I bump and sell, and we go from there. Nowhere is there a broken table or a million chair-shots, or blood, or off-the-top-rope insanity. My first priority is that I walk out of the ring, and I don’t do anything risky. I don’t ask people to do things that they’re not comfortable with, and I do the same. There will be no wacky maneuvers in my matches.”

This sort of approach seems at odds with the hardcore fare typically seen in Extreme Championship Wrestling, where Diamond spent the last couple of years before the company’s bankruptcy. However, Diamond feels that his character and style were a good mix among the more violent matches.

“ECW was hardcore, I wasn’t. Sometimes the direct opposite fits. Fans were not paying to see me swing a chair. Listening to a lot of the fans, through e-mail or interaction, they found me an entertaining person on the mic. Knowing that, I tried with my promos to be the complete opposite of ECW’s hardcore style. You have to maximize what you can do, and minimize what you can’t.”

He notes that most of the top echelon in the WWF tends not to regularly perform “wacky maneuvers” either. Rather, promos by Steve Austin or the Rock for example, are often given more airtime on Raw every week than matches, yet millions of fans still tune in weekly.

He hopes that one day those same millions will tune in to see him again. It was heavily rumoured that he and his fiancee Dawn Marie, another ECW alumni, were going to be part of WCW after ECW closed its doors, but that never came to light.

“We were called to go to Baltimore to talk with Johnny Ace and Ricky Santana and Eric Bischoff. Johnny Ace talked with us for hours. They called me the following week for a dark match, and I wasn’t able to come in. They called me again, and wanted written clearance from ECW. A couple of weeks later, the bottom fell out of the industry and Vince bought WCW.”

Since then, they have had minimal contact with the WWF. Instead, the pair are keeping busy working independent shows, including the inaugural taping for Jimmy Hart’s new wrestling company, the XWF. Diamond was thrilled to be a part of that show, noting that he had a chance to work with some of his childhood heroes.

“They used us in one segment with Jerry Lawler, and in another with Lawler and Roddy Piper. These guys are legendary, I was a big fan of both of them as a kid. It was such a great experience being around guys like that. It really made me step back and appreciate what’s happened to me.”

Of course, to many male fans, being engaged to Dawn Marie would be reason enough to appreciate your life. Simon agrees, although he notes that being a couple and working together can sometimes be difficult.

“It can be a strain on a relationship. Out of 24 hours a day, we spend 23 and a half together. Maybe I’ll go out to the store for 30 minutes by myself. We travel together, we’re at home together, we train together, we run errands together. We have arguments – any couple does. Traveling together can be hard. But so far so good.”

As pervasive as wrestling is in their lives, they make it a point to not make it the be all and end all of their relationship, which Diamond says is one of the reasons they’ve been together for a while.

“Yes, we work together, but we still try to remain separate entities. Her business is her business, my business is my business. We try and keep wrestling out of our lives as much as possible when we’re at home.”

No doubt that can’t be an easy task, especially when you’re as big a follower of the industry as Diamond is, a trait which he considers his greatest strength. He maintains that your understanding of the history of wrestling is a key indicator of how successful you will be in the business. A measure of how willing you are to let wrestling consume your life, as he has.

“The guys who make it, they’re the ones who know wrestling’s history. That’s how they come up with their ideas: take old things and add their own twist. Most of what I do, I stole from Tully Blanchard. Scott Steiner, Jesse Ventura, and Hulk Hogan got all their stuff from Superstar Billy Graham. You have to remember the legacy of the guys who came before you. And take what you can from them to get to that same level.”

“You want to know who’s going to make it (in wrestling), the guys who will be around in five years? They’re the ones who, right at the cusp, they make the decision to give their life up to wrestling. You have to in order to make it. You have to make the sacrifices to achieve your goals.”

For Diamond, his goals are clear: “To be part of the XWF as it moves forward. To finally get married. To finally get my new dog house-trained. And in five years, I hope to still be in the business. I hope the fans still keep coming, keep enjoying wrestling. And, hopefully, I can keep you enjoying it.”

That is, unless he’s coaching for Notre Dame.