PHILADELPHIA – Within the realm of professional wrestling, having a competitive drive to overcome adversity when the pressure is on can mean the difference between crawling in arduous anonymity, to standing tall in the celebrity spotlight. Nevertheless, what really defines someone as a competitor in an industry that is not looked upon as a competitive sport?

If you ask NWA/TNA grappler Simon Diamond, he will tell you that having that elusive advantage for the wrestling game, or anything else you pursue, comes down to having the mental edge.

“I’ll never lose my athlete mentality that I have,” said Diamond in an interview with SLAM! Wrestling at the Pro Wrestling WORLD-1 show in Philadelphia recently. “I’ve had it since I was a kid. Part of that athletic mentality is you have to adjust and adapt to each and every situation.”

Diamond is in an envious position when it comes to having the sporting tenacity to succeed. With a stellar collegiate background in baseball and one-time draft pick for the San Diego Padres, the former ECW standout has always been in an environment where competition forced him to meet challenges head on. 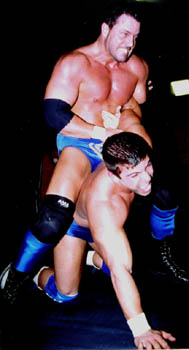 Simon Diamond works over the arm of Matt Striker during his recent appearance with Pro Wrestling WORLD-1. Photo by Corey David Lacroix

“With baseball, you’re adjusting and adapting with every pitch when you’re at bat,” he explained. “I’m lucky that I was always a benefactor of phenomenal coaching throughout all my athletic career. A lot of the guys in wrestling don’t have that background, so are they going to be able to adjust and adapt the way you need to be.”

With the dramatic upheavals that have washed over the wrestling scene in recent years, Diamond is very much an expert on the topic of adapting to the new reality of the squared circle business.

It was 2001 when ECW folded, with Diamond having elevated his in-ring abilities to that of a stand out tag team tactician. Now faced with imminent unemployment and no substantial offers from elsewhere that would stand the test of time, Diamond had a problem, or more precisely, a choice.

To use a baseball analogy, he could pack up his gear and leave the ballpark for good, or climb out of the dug out and keep playing ball.

Not only did Diamond choose to continue pursuing his love for professional wrestling, he also became reacquainted with his passion for what gave him his foundation for competing, baseball.

“I started playing baseball again two years ago at the request of some guys at the gym where I work out who play with a semi-pro league up in Jersey,” Diamond said, admitting that at first, he wasn’t too keen on returning to the ball diamond.

However, prompting from his long-time fiancée, WWE Diva Dawn Marie, changed Diamond’s mind, as he recounted her reaction to his initial refusal to step back on the ball diamond. “When I spoke to Dawn about it she said ‘Why?’ and I said ‘Because, Dawn, I can’t go from being at the level I played at to now, because that will just mess with me mentally.’ And she was like ‘Just have fun for once in your life and stop worrying about being the best.'”

As it turned out, playing baseball again has garnered the kind of therapy cherished by those who seek an escape from the harsh rigors of a demanding career. “I can’t tell you how much fun I’ve had. I never realized how much I missed it,” admitted Diamond. “Here I am at 34 years old and I’m hitting like I’m 20 years old again.”

In addition, being a part of a team outside of wrestling has provided a refreshing brand of camaraderie. “In wrestling, there’s a certain etiquette and things you have to follow,” remarked Diamond. “In baseball, I’m hitting .350, you’re hitting .300, I’m gonna bust your balls and you can’t say a thing about it. We go out after games and we drink, it’s just the camaraderie.”

Diamond continues to pursue his role as a tag team specialist in NWA/TNA, along side his long-time partner in crime, Johnny Swinger. Although the two are currently feuding with each other in the Nashville-based promotion, Diamond had nothing but glowing accolades for Swinger. “The guy is like a brother to me. I really do consider Johnny Swinger to be my best friend in the business. That adds to the chemistry we have as a team.”

As for any aspirations for a run as a singles competitor, Diamond confided that he is more than happy in the tag team ranks. “I enjoy tag team wrestling because I think it’s a dead art,” Diamond said, pointing that NWA/TNA has provided an environment of resurgence for tag team wrestling. “To be a part of this rebirth in tag wrestling is good. But at the same point, if they needed me to be singles wrestler, I think I can be a singles wrestler. I enjoy being a tag wrestler though.”

In addition to his commitments to NWA/TNA, Diamond is also a proud member of the Extreme Horseman faction, made up of ECW Alumni C.W. Anderson, Steve Corino and Justin Credible. He admitted that being tagged with the Horseman moniker, originating from the famed Four Horsemen of wrestling, comes with the responsibility to uphold a prestigious aura.

“You’ve got big shoes to fill. They are probably the single most influential group in all of professional wrestling,” said Diamond. “Tully Blanchard was like a god to me. I sat there and I would watch and study his mannerisms and approach. There’s a lot pressure not to choke on the Horsemen name. We certainly don’t consider ourselves to be the Four Horsemen, or even the Four Horsemen of Notre Dame,” added Diamond, a long time fan of the Notre Dame football team.

In his recent tenure with Pro Wrestling WORLD-1 promotion, Diamond once again saw action as a tag team participant. This time, he was joined up with another long time tag partner, C.W. Anderson.

As for his outlook on the future of wrestling, he was blunt in his assessment that if the industry expects to climb out of it’s current slump, it must be done from within. “We’re certainly responsible for it. The easiest thing is to do in a negative situation is to point a finger. The hard thing to do is look internally and dissect the problem. Everybody needs to be little more creative, everybody needs to be a little more hungry.”