It’s not a good idea for a small boy to pay never mind to his 6-foot-1, 245-pound father, especially when that father is a 16-time world-wrestling champion who chopped Hulk Hogan into a mass of welts.

But David Flair decided at an early age that he wanted to follow in the footsteps of his world famous father, the “Nature Boy” Ric Flair.

Flair admits reluctantly that wrestling is in his blood. His parents were divorced, therefore Flair saw very little of his father when he was growing up. In fact, he acknowledged his father did not actually want him to become a wrestler.

“He never wanted me to get into the business,” the younger Flair told SLAM! Wrestling. 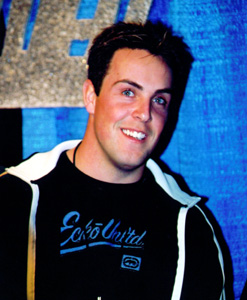 And although Flair doesn’t intend to become the superstar his father is, he is in no way to be ignored.

While Flair is currently working for a medical company, he is also seeing considerable ring action. He is scheduled to wrestle April 3 in Lenoir, NC against Gorgeous George South. As well, Flair will play the heel as the first challenger to new Virginia Heavyweight Champion “The Dynasty” Sean Lei April 17 in Norfolk, VA.

Born in 1979, Flair, a spitting image of his father, was raised in Minneapolis, MN, where he lived with his mother. He graduated from Hopkins High School and is considered by long-time friends as quiet and less of a showman than his father.

Veteran NWA referee Tommy Young, a friend of the family who has known David since he was born, remarked on Flair’s personality. “David’s not like Ric at all. Ric is so flamboyant, but not David. He’s a good kid, though. I love him and think very highly of him,” Young said.

Despite a differing personality, Flair’s appreciation for his father’s style and greatness moved him to enter wrestling in 1999, shortly after he graduated from high school. He worked alongside his father, who was already a legend in the ring.

While he knew he wouldn’t immediately approach his father’s status, Flair was still determined to make a name for himself in the wrestling world. Flair held four titles spanning from August of 1999 to April 2001. This included a one-month span as the WCW United States Heavyweight Champion.

When his father reigned as king of WCW, Flair’s true love of the sport shone through. Flair spoke highly of the days when he held the U.S heavyweight belt, not because of the aura that surrounded the title, but because of who he got to wrestle.

“I got to wrestle guys like Chris Benoit. It was fun, and they were some good wrestlers,” said Flair, who turned 25 earlier this month.

Flair tagged with his father at the 1999 Souled Out PPV. He even defeated WCW head Eric Bischoff, who had banished his dad from WCW several months earlier, and got to shave Bischoff’s head after the match.

Unfortunately, Flair came around at the same time WCW was developing a reputation for tasteless story lines. WCW booker Vince Russo created many angles that were more appropriate for a soap opera than the squared circle.

One such angle involved allegations that Flair was the father of Stacy Keibler’s child. When he found out that Keibler was “pregnant” by someone else, he went on a rampage to find the real “father,” who turned out to be Buff Bagwell.

In another angle, after he was supposedly hit by a car, Flair fell under the control of Russo and turned against his father.

By November 1999, David was carrying around a miniature Statue of Liberty as his weapon of choice. He also became well known for shaving the heads of his opponents — one head being that of his father.

Less than a year later, in June 2000, with the help of Russo, Flair “retired” his father from WCW.

Looking back, Flair knows he didn’t have much say in Russo’s nonsensical angles.

“At that point in time, you had no control over anything,” Flair remarked. “There were too many chiefs and not enough Indians.”

When WWE bought WCW in 2001, Flair was sent to Ohio Valley Wrestling for training and further development.

He did not stay long, however, and ended up wrestling throughout much of Europe. “I was in England; I was in Germany, and in some shows around here as well.”

In December, Flair returned from a six-month stint for the IWA promotion in Puerto Rico, where he held the Intercontinental title. Although a lot of controversy and Internet rumors have circulated as to why he left Puerto Rico, the reality, Flair admits, is that it was simply a horrible place to live.

“I just got my first computer in December,” Flair chuckled. “The living conditions were terrible. I had no car and when you’re used to doing your own thing, and then have to ride the bus everyday, you have to look at what’s going on with your life.”

Flair returned to North Carolina, where he has a full-time job for a medical equipment firm. He said he will continue to work independent shows. Last month, he got a warm reception as he accepted an award on behalf of his father at a legends show in Spartanburg, SC.

However, he does recognize a huge difference in wrestling from the glory days of his father.

Flair, although lacking the wrestling persona of his father, will continue to make his silent mark on the halls of old coliseums and college gyms. After all, wrestling is in his blood, right?

Annie Johnson is a staff writer for The Johnsonian at Winthrop University.