ROH Do or Die II a critical success

ELIZABETH, NJ – It was ironic that the name of RoH’s afternoon convention card was “Do or Die II” as it was definitely do or die time for the two-year-old promotion. Critics and fans wondered what would happen in the wake of the Rob Feinstien scandal, as there had been rumours about protesters outside the Rexplex (which wasn’t the case) and a small amount of fans had changed their plans.

In addition some fans wondered how good a show could be without mainstays like American Dragon, Christopher Daniels and Homicide, and occasional wrestlers Raven and Steve Corino. All of them had prior commitments in Japan, their non-participation had nothing to do with Feinstien.

With all that in mind, the pressure was on, and not only did RoH deliver, they silenced the critics and put on what many fans are saying was the greatest RoH show ever. 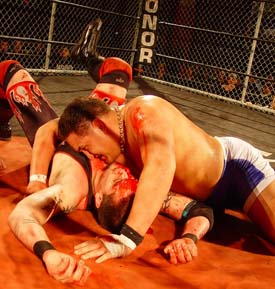 Samoa Joe takes on Jay Briscoe in a cage. — courtesy Whack at the RoH site

Approximately 600 fans attended the afternoon’s convention card, a good teaser to the main show of the night. For many, the battle between Californians Super Dragon and Excalibur was the best match of the show, but everyone was impressive as they vied for a shot at a long-term opportunity with the company.

The evening crowd drew the largest crowd in RoH history, as a standing room only crowd of 1,800+ cheered, chanted, and urged the performers on. Bringing back memories of ECW, the rabid crowd chanted “Shut the F— up” “Holy s—” among other adult oriented chants.

The show kicked off with Dusty Rhodes (who replaced Roddy Piper) getting into a fight during his autograph session with local veteran Ox Baker.

“They asked me to come to Wrestlemania, and I said Vince McMahon you can kiss my ass, I’m going to Ring of Honor,” Rhodes told the crowd before praising the talent.

Match wise, the opener was a breathtaking six-man match. Teddy Hart made his return to RoH, something fans never thought they would see after his infamous Backflipping incident in November, and although some chanted “CM Punk” at the Canadian, most chanted his name. Also returning after an injury was the extremely popular Amazing Red, while Sonjay Dutt, Jimmy Rave, Mark Briscoe and Jack Evans rounded out the six. The match was a high-flying fans dream. After too many incredible names to move, Red took the win with the infra-red. After the match Hart and Evans brawled with the other four before Teddy was hauled out of the ring by security.

After a brief interview in which Julius Smokes challenged champion Samoa Joe on behalf of the absent Homicide, former champion Xavier beat Slyk Wagner Brown in a solid technical contest. Also laying down a challenge to Joe, Xavier was dragged out of the ring by manager Prince Nana when Joe, looking snazzy in a suit, came to the ring. Joe took a moment to give heartfelt thanks to the fans in attendance for their continued support of RoH, and got a loud ovation and “RoH” chant.

In a technical masterpiece, Jerry Lynn locked up with England’s Nigel McGuiness to get a shot at the Pure Title. Despite the drastic difference from the first two matches, Lynn and McGuiness kept the crowd into it as they traded holds and reversals before Lynn planted Nigel with the cradle piledriver. He will get a title shot in his home state, St. Paul, Minnesota on April 23rd.

John Walters, fresh of a loss to the Big Show on Smackdown (and causing fans to chant “chokeslam”) and Matt Stryker wrestled for the vacant #1 contenders trophy. Another solid technical bout although the RoH fans seem to not be as into Stryker as they are others on the roster. Walters ended up trapped in the Stryker lock, and the fans chanted “Please Don’t Tap.” He complied, but the pain was too much and he passed out, giving Stryker the #1 contendership to the RoH title.

The feud between The Prophecy and the Second City Saints continued, as Dan Maff & BJ Whitmere teamed up against Colt Cabana and Ace Steel. Many in the crowd have followed the long-running feud (Which also includes Christopher Daniels leading Maff and Whitmere in the Prophecy, while CM Punk is one of the SCS) and were into the bout, which turned into a brawl on the outside. When Maff dived out of the ring onto everyone brawling in the audience, it lead to chairs being involved and the match being thrown out. Unlike other companies, matches almost always end in a clean finish, so this came as a shock to many. The crowd booed, but then cheered as the locker room emptied to try and separate the two sides as they brawled.

Former NWA Champion Ricky ‘The Dragon’ Steamboat got a standing ovation as he headed to the ring to referee the Pure Title match between champion AJ Styles and challenger CM Punk. As Punk made his entrance, he looked into the camera and echoed the sentiments of many of the RoH locker room, stating “There’s no place like home.” Styles and Punk had fought in the finals of the tournament and many fans were expecting a classic. They got it, as the two put on a wrestling work of art, trading moves, counter moves, and taking each other to the limit. The Pure Title is unique in its different rules: Only three rope breaks, a 20 count on the floor, and no closed fists. The fans verbally battled each other, half chanted “Let’s go AJ” and the other half responded “Let’s go Punk.” When CM got in Steamboat’s face a loud “F— him up Steamboat, F— him up” chant broke out. Punk hit Styles with his own Styles Clash and AJ put his foot on the ropes. Out of rope breaks, AJ was trapped in a sleeper and when he grabbed the ropes it didn’t matter. He broke free, and took Punk’s head off with a discus lariat for the pin.

The match over, Samoa Joe came to the ring and he and Styles went head to head, arguing over which title mattered more. Steamboat reminded both that they were proud champions and made them shake hands. Moments later, Punk made the mistake of trying to attack Steamboat and was taken out by the legend to a loud ovation.

At that point, fans could have gone home happy but amazingly there were two more matches. After an intermission to set up the steel cage, Samoa Joe stepped into the ring to defend against Jay Briscoe.

Before the match many Internet fans had criticized the decision to use this match on RoH’s biggest show ever. The gamble paid off. Briscoe tried a number of times to escape the cage, only to get dragged back in by Joe. Early in the match Jay became a bloody mess, he and Joe were soaked in blood that was reminiscent of the brutal bloodbath between Bret Hart and Davey Boy Smith in 1995. Many were concerned for Briscoe’s health as blood poured off of his face. After taking a beating he came back with a diamond cutter off the cage and had the fans convinced he had won the belt after a Jay Driller. Jay’s brother Mark at ringside tried to scale the cage but AJ Styles stopped him and hit a Styles Clash on the floor. Moments later Joe planted Briscoe with a MuscleBuster off the cage to end the match. The respectful crowd gave both men a standing ovation and chanted Briscoe.

Again, the night could have ended there, but the stage was set for Scramble Cage 2. A unique idea that was originally used on November 1, 2003, platforms are on each corner of the cage, allowing for wrestlers to dive off of them. The match, designed to end the feud between the Carnage Crew and Special K was a brutal war. The Carnage Crew of Loc, Devito, Masada, Justin Credible and Dusty Rhodes were outnumbered by the ravers of Special K – Dixie, Izzy, Deranged, Hydro, Angel Dust, Mellow, Slim J, Cloudy, Lit, Cheech, Becky and others. Masada, a 250 pounder, did a 450 off the top of the cage to the floor. Ladders and Chairs were used, and Credible broke out his trademark Signapore Cane. Rhodes’ participation was brief, he entered the cage halfway through the match and distributed bionic elbows until Ox Baker returned and they brawled to the back. The match was capped off with the most insane move of the night, and one of the craziest in wrestling history — Devito piledriving Angel Dust off of the platform through two tables for a definitive finish.

The show came to an end with a standing ovation from the crowd, loudly chanting the name of the promotion. After the show, the relief and emotion on the face of the wrestlers spoke volumes.

“Tonight was the most important night in the promotion and in my career,” Loc told SLAM! Wrestling after the show. The wrestlers were more then happy to take pictures and sign autographs, and were genuine in their appreciation for the fans coming out to support the show despite recent events.

Afterwards, RoH management decided to dub the card “At Our Best.” An apt name indeed, because Ring of Honor was truly at its best that night. In a statement on www.rohwrestling.com the week prior to the show Loc wrote “ROH is a family. Period. We come to every show with the intent of giving you everything we have in order to make this product that we all believe in and are so proud of grow. This family is about leaving it all in the ring. This family is about making sure that every single person who pays their hard earned money to watch us do what we do, not only feels they got their money’s worth, but wants to come again and bring his or her friends.”

If March 13th is any indication, that Family will remain together for a long, long time.