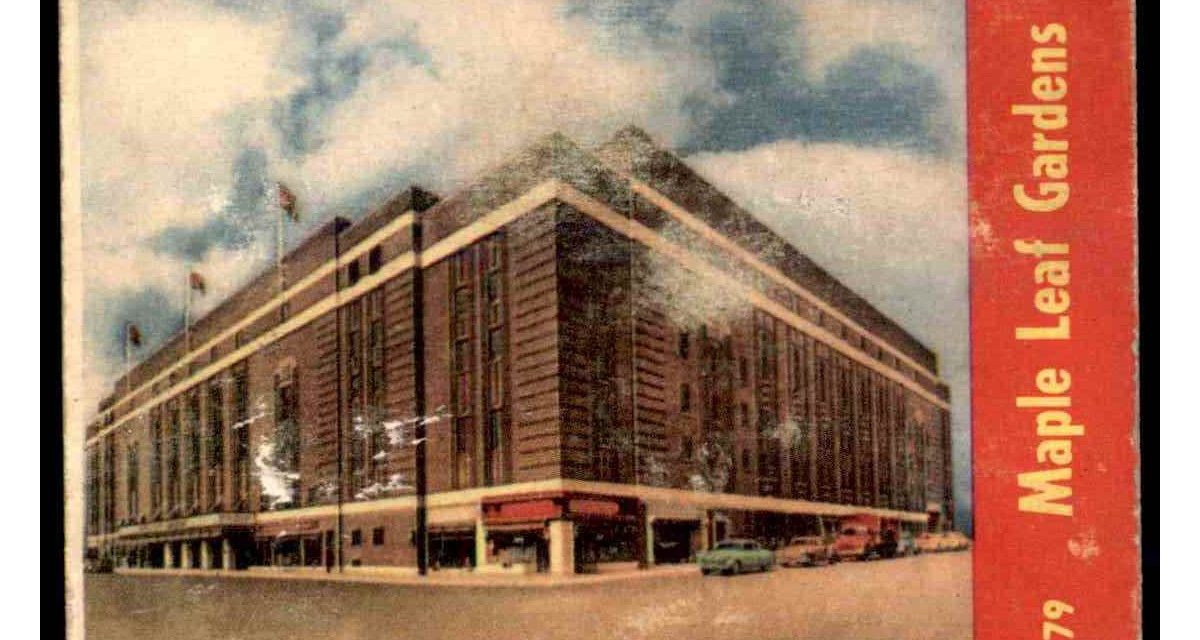 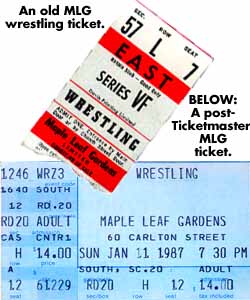 As the final days tick away on Maple Leaf Gardens (MLG), let us take a moment to remember what was really important in that legendary arena. Not hockey, or music, or political rallies. Wrestling!

On the old WWF Maple Leaf Wrestling show, Gorilla Monsoon would call MLG “the mecca of pro wrestling” over and over. And even in the hyperbolic world of the squared circle, he wasn’t far off.

When talking about MLG and wrestling, the keys are the Tunneys and Whipper Billy Watson.

Frank Tunney was a secretary to Jack Corcoran, the promoter and founder of the Queensbury Athletic Club when the first MLG wrestling show was promoted Nov. 19, 1931. At that show, Jimmy Londos wrestled Gino Garibaldi. A few years later, Tunney bought out Corcoran and ran the show in Toronto right up until his death in May 1986. Besides countless wrestling shows, Tunney also promoted the George Chuvalo – Muhammad Ali bout.

Jack Tunney — Frank’s nephew — and his cousin Eddy Tunney — Frank’s son — inherited the Queensbury Athletic Club when Frank died. Jack moved into the spotlight his uncle loved, and Eddy was a silent partner.

When Jack Tunney was forced out of the WWF in 1995, so too was pro wrestling from the Gardens, as he owned the rights.

With the Tunneys behind the scenes, there was never a bigger star in Toronto than Watson. The Whip, was quite simply, a hero both in and out of the ring. The people and the press loved him, and he loved them back. Watson was to MLG what Maurice ‘The Rocket’ Richard was to the old Montreal Forum.

For The Hungarian WolfmanWillie Farkus , MLG was the “very, very best place” to wrestle, and he remembered fighting Watson in a main event (in his heavy accent, it was actually closer to “Vipper Villy Vatson, long time ago”).

Other world title changes at the Gardens: Dick Hutton beat Thesz on November 9, 1956 for the NWA title; Thesz beat Nature Boy Buddy Rogers in 14:54 on January 24, 1963 to win his sixth NWA title — it also sparked the division of promoters that led to the creation of the WWWF; Harley Race beat Terry Funk at 14:10 of a one-fall match using an Indian death lock to win his second NWA title on February 6, 1977. 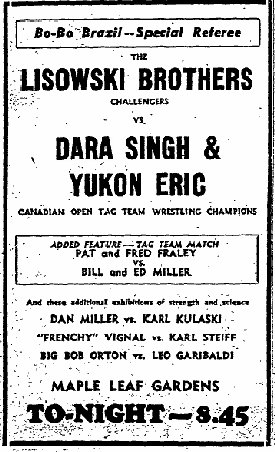 For headliner Waldo von Erich, the Gardens symbolized when he “got into the big time really.”

If the ’40s, ’50s and ’60s were dominated by Watson, the ’70s belonged to The Shiek Ed Farhat. Month after month, he fought off all challenges with his dastardly tactics and manager Abdullah Farouk . Some of the names he mowed down: Bulldog Brower, Tony Marino, Bearcat Wright, Johnny Powers, Chief Jay Strongbow, Edouard Carpentier, Tiger Jeet Singh, Big John Quinn, Mark Lewin. He also faced Andre the Giant on many occasions, though never pinned the big man.

Here’s an excellent example of the promoting style of the day.

In the late 70s, early 80s, MLG brought together shows unlike anywhere else in the world. It wasn’t uncommon to have AWA World champ Nick Bockwinkel defending his title one month, and NWA World champ Race the next. Even WWWF champ Bob Backlund came to town on occasion (including once defending against Ric Flair!). It was King Kong Angelo Mosca’s favorite place to roar from 1980-1982, just down the road from his glory days as a Hamilton Ti-Cat at Ivor Wynne Stadium.

The loose affiliation the Tunneys had with the NWA and Mid-Atlantic Wrestling ended in July 1984 when Jack Tunney signed-on as a WWF promoter.

MLG became an important stop for the WWF, and one of best arenas on their circuit. The shows were often taped for the myriad of WWF shows, including the Canadian Maple Leaf Wrestling. 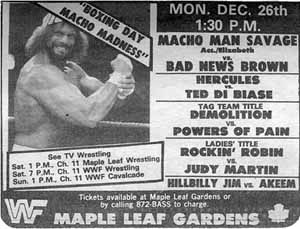 The Iron Sheik was a standard at MLG through both the NWA and WWF years. “Maple Leaf Gardens was always good wrestling atmosphere, good area for wrestling,” he said. “My pleasure to come to the Toronto. I have a lot of wrestling fans. They know about Iron Shiek and my background. And like I say, Maple Leaf Gardens was good to me and I never forgot that.”

Legendary midget wrestler Lord Littlebrook remembers MLG for the weather more than anything. “It was cold in the winter, very cold,” he said, and recalled fans lining up around the corner waiting to get let in to the building.

Current ECW manager Bill Alphonso worked MLG on a few occasions as a referee. He recalled that Toronto had a “helluva a crowd, helluva a wrestling town. Toronto’s great. Toronto’s nightlife. Toronto’s cool.”

Though the WWF promotes now at SkyDome, and WCW is headed in to the new Air Canada Centre, MLG is still the crown jewel of pro wrestling in Toronto. Designated a historical building by the City of Toronto, it cannot be demolished. It will, however, likely be changed into some sort of facility that might make some money, much as the old Montreal Forum now is home to movie theaters.

Perhaps one day, pro wrestling might return to MLG, but to these eyes, that seems very unlikely.