Many claim he was the inventor of the sleeperhold made popular to this day in wrestling. He called it the “Weaverlock” and would put away thousands of opponents over the years with the hold. Johnny Weaver, the master of the “Weaverlock” died today in Charlotte, N.C., at the age of 72.

When co-workers of his noticed he was not at work Friday morning, they called his house. After hearing no response they went to his house to find him dead. Although autopsy examination is forthcoming, he is initially believed to have died from natural causes.

After the national expansion of wrestling in the 1980s, many fans came to know Weaver as an announcer for Mid-Atlantic Wrestling, which would become World Championship Wrestling. Few fans knew of his in-ring achievements as a multiple tag team champion in numerous territories in the Southeastern United States. 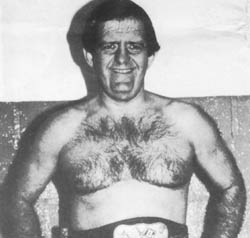 Johnny Weaver near the end of his in-ring career

Born Kenneth “Johnny” Weaver in Indianapolis on November 17, 1935, he made his professional debut in 1955, around his hometown for promoters Jim Barnett and Johnny Doyle, including work as a referee, and on the road as Johnny Ace. He was initially paired with Sonny Myers as Sonny and Johnny Weaver. In 1960, Weaver was called “the current ‘rage’ of the teenagers,” and the “Rage” nickname stuck with him in his early years.

George Becker would become Weaver’s most familiar partner over the years. Becker was a big name in the San Francisco territory before settling in the Mid-Atlantic area in the mid-1960s. The two would capture the NWA Mid-Atlantic Tag Team titles five times. Their most memorable feud was with Swede Hanson and Rip Hawk, who they first won the titles from on May 1, 1969, in Washington, D.C.

Weaver explained to Steven Johnson how the pairing came about for The Pro Wrestling Hall of Fame: The Tag Teams. “That came from Jim Crockett. He’s the one that pushed us together. Of course, when I came down here I was the young guy, George was older with experience,” Weaver said. 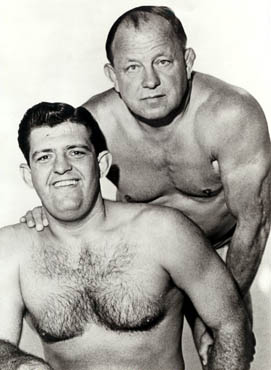 The veteran George Becker and the young Johnny Weaver.

“He was a good guy, a hard wrestler and produced when he got in the ring,” Rip Hawk told SLAM! Wrestling after hearing the news of Weaver’s death on Friday evening. “Despite our ill feelings in the ring, we could be friends outside the ring.”

The two teams would exchange the title until September 27, 1971, when Weaver and Becker would capture the titles for the fourth time as a time. After dropping the belt a few months later, the team would disband after one of the most successful tag team runs at the time.

When Weaver and Becker held the titles, times were much different. Tag team title matches were often on the main event slot of the card. The titles were not considered second tier and were respected as much as the Heavyweight title was in the territories.

Rene Goulet was a big Johnny Weaver fan. “Every time Johnny Weaver was in the ring, it was a great match,” Goulet said in The Tag Teams. “He was over in the territory, sold good, he was a great babyface. He was a hell of a worker in the ring. People liked him. When you used to beat the hell of him, the people used to go crazy.”

Weaver would also win the Mid-Atlantic Tag Team titles with partners Art Nielson (on two occasions), Dewey Robertson (who later became The Missing Link) and Jay Youngblood. Weaver’s last run with Youngblood would be in December 1981 before losing to Ox Baker and Carl Fergie.

He would find himself successful at times as a singles wrestler too. He would hold the NWA Florida Southern Heavyweight Championship on numerous occasions starting in 1967. He would also capture the Mid-Atlantic Television title from Baron von Raschke on March 5, 1978 in Charlotte, N.C. He would drop the title back to von Raschke on March 26. 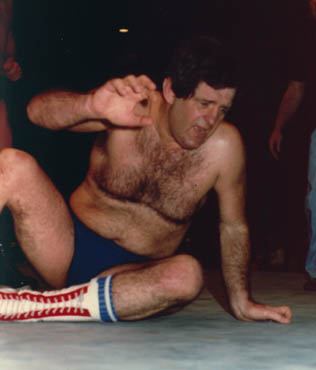 His role as a booker for the Mid-Atlantic territory came surprisingly years apart. His first filled the role in the late 1960s and in the early 1980s, he booked Mid-Atlantic house shows in South Carolina and Georgia. Weaver was also the booker for the time in the late 1970s/early 1980s that Jim Crockett owned the Toronto territory, in partnership with George Scott and the Tunneys.

In 1979, he started as announcer for the territory while still active in the ring next to Rich Landrum on World Wide Wrestling Weaver would also partner with David Crockett and Bob Caudle before leaving the company in 1988, before the sale to Ted Turner.

In a lengthy interview with the Mid-Atlantic Gateway website from late 2007, Weaver addressed his aging in front of the fans. “You know how I knew time was passing me by? I was always fan friendly and I would get dressed and go out and talk to the people all the time during all of the matches up until it was time for me to go on. I did that for years and years and years. The girls would all run up and hug me. And then finally, they started running up to me, the girls, and they’d throw their arms around me, about a 100 of them, and they’d whisper in my ear, ‘Go get Ricky Steamboat.’ (laughter) And then I knew I was over the hill.” 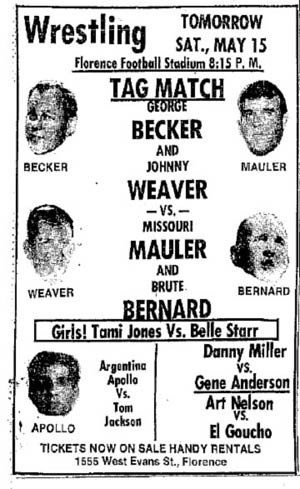 In an infamous angle, while just a commentator, Weaver was placed in a sleeper by Hiro Matsuda on World Wide Wrestling, causing Weaver to bleed from the mouth. The angle helped set-up the Starrcade ’87 match between Dusty Rhodes and Lex Luger for the NWA United States title. Weaver accompanied Rhodes while Matsuda was in Luger’s corner. Luger would be disqualified for using a chair.

Weaver was married twice, the first time to Betty, with whom he had a son named Bill.

But most people associate Weaver with women’s wrestler Penny Banner, whom he married in 1959 in St. Louis, with the reception at the Claridge Hotel, where wrestling promoter Sam Muchnick had his office. They had a daughter together, named Wendi.

The Weaver-Banner marriage was a popular one with the press and fans. “The Weavers have been married for several years and those in the trade say it has been a very happy marriage with a minimum of serious quarrels. A few armlocks, half-Nelsons, backbreakers, with possibly a few of those wrestling wallops to the jaw, but nothing serious, and those bits of physical torture come under the heading of practice,” hypothesized Johnny Janes of the San Antonio Express in the April 9, 1963 edition.

But the truth wasn’t far from the newspaperman’s creative license claimed Banner in her autobiography, Banner Days, which detailed the years of physical and mental abuse she suffered at the hands of Weaver.

“It didn’t take long to realize that marrying Johnny (the wrestler, not the referee) had a real down side,” wrote Banner. “The fact was that was he was a young and handsome rising wrestler and was so recently put in the limelight, he now had women known as ‘arena rats’ throwing themselves at him every night. It made a huge difference in our relationship.” They split in 1995.

Weaver was still semi-active in the area as a deputy sheriff for the Charlotte, N.C., police department, where he had put in 19 years of service. He would also make visits to area wrestling reunions and independent shows. CWF Mid-Atlantic, a promotions based out Burlington, N.C., has run the Johnny Weaver Cup annually since 2004. Weaver has been attendance each year to award the winner with a trophy.

“I last saw him in the summer,” Hawk said. “We talked about old times, and he seemed to be in good health and spirits.”