Mid-South DVD has great matches, but no extras

The national expansion of the WWE in the mid-1980s killed off the territorial system. Mid-South Wrestling (later Universal Wrestling Federation) was a territory seeming to have the ability to breakthrough but with stars leaving by the busload, they ultimately were sold to the Jim Crockett’s Mid-Atlantic territory in 1987. It has the star power and angles that were considered revolutionary at the time, a lot of which can be seen in Giants Midgets Heroes and Villains, a DVD featuring some of the best matches and angles from Mid-South Wrestling.

Mid-South was on fire in the early 1980s, run by promoter and former wrestler Bill Watts. He was a genius in booking but his temper and old-school ways would eventually catch up with him. In the short time that the WWE ran on national cable’s WTBS on Saturday evening in 1984, Mid-South ran mornings on the station. It became the highest rated show on cable at the time. 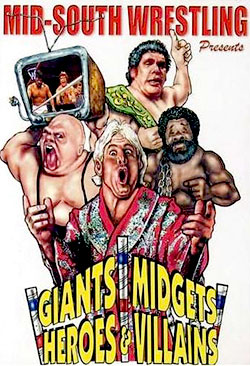 This DVD is a great chronicle of what made Mid-South so special. It mixed established names (Ric Flair, Andre the Giant) with emerging stars (Ted Dibiase, Junkyard Dog). Mix the names with exciting angles and you got Mid-South Wrestling.

The DVD is two and a half hours of matches and angles that really display a great sample of what made Mid-South stand out. The DVD wastes no time, as the first match has Ted Dibiase taking on Ric Flair for the NWA World title. Dick Murdoch decides to come to the ring before the match to talk to Dibiase. Without giving too much away, Dibiase is left a bloody mess.

A surprise is when a young Rick Steiner (announced as Rob Ricksteiner) appears to team with Steve Williams against Butch Reed and Jim Duggan. Steiner was just weeks into his career but already had the power and look that made his career.

Also, you see the early years of announcer Jim Ross, who showed he was going to be one of the greatest from his first years in the business.

The title of the DVD includes “Giants and Midgets” and this DVD delivers with King Kong Bundy and Andre the Giant filling the giant spot while Cowboy Lang and Little Tokyo filling the midget role.

Some disappoints of the DVD might be that they do not follow-up on some of the matches and angles shown. I would have hoped for a Murdoch vs. Dibiase grudge match as well as the Mr. Wrestling II turn on Magnum TA (they show the two tagging). But I guess those can be left for future releases.

Fans need to catch these DVDs quickly as Mid-South is last of the bigger American promotions that have not sold their footage to the WWE. Micah Watts is in charge of the footage and helps edit and prepare this and future releases. Bill Watts lost the rights to the footage in the 1990s following a divorce from his wife, Ene Sooro.

Full rundown of the DVD: