Love and headlocks go together for ‘Danger Boy’ and ‘Girl Dynamite’

The engaged duo of “Danger Boy” Derek Wylde and “Girl Dynamite” Jennifer Blake can claim to have drawn heat not only in the ring but also the first time they met each other.

“Jennifer and I met at work. We were both working in a restaurant [she was a hostess, he a server] and I started hitting on her right away,” said Wylde (a.k.a. Dennis Stewart), a veteran of over 10 years on the indy scene. “I came on a bit strong and was shot down in flames just as fast.”

“I thought he was a creep,” recalled Blake (a.k.a. Jennifer Ykema) of their initial encounter at their hometown Niagara Falls, Ontario eatery.

“I thought she was stuck up and full of herself and never gave her the time of day after that,” Wylde added. “About six months went by and we both left our jobs there, but ended up coming back and just sort of started over. I guess when something is meant to be, you can’t run from it.” 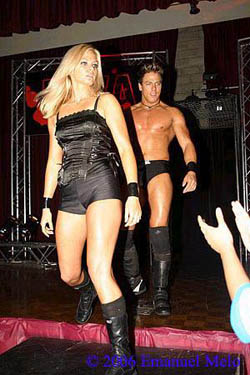 Jennifer Blake and Derek Wylde head to the ring. Photo by Emanuel Melo

Blake explained enough time had passed that the two “forgot we hated each other” and one day met for lunch. Once they started talking about wrestling, they realized they shared a common passion.

“I told Derek that Triple H was my favourite wrestler, but I always liked him better as Terra Ryzing when he was wrestling for WCW,” Blake said, adding she has been a wrestling fan all her life and even ran away from home to meet Bret “The Hitman” Hart when she was 15. “I think he was surprised that I knew my stuff about wrestling and he started to take an interest in getting to know me. And we found that we had a lot more in common than just wrestling.”

“She is that rare kind of girl that loves the business for what it really is,” Wylde said. “She’s not a wannabe actress or model. She always loved wrestling and it showed right away. You can’t really hide the fact that you are a mark for wrestling, no matter how hard you try!”

Wylde and Blake started dating and about a year later Wylde let her know she was the girl for him. At Ballpark Brawl III in August 2004, Wylde, with the help of Blake, won the NEO Spirit title. Then, in the middle of the ring and before the throngs of the Buffalo Bison Stadium, he asked Blake to marry him. A very surprised Blake said, “Yes.”

The 30-something Wylde (“Let’s just say I’ve past that 30 mark…”) and Blake, 24, said they are just waiting for the right moment to officially tie the knot. 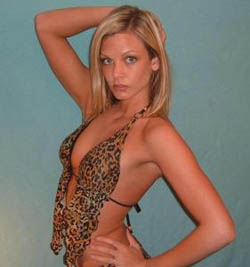 “We don’t have a date set yet but we wanna do it right. I can honestly say that my heart belongs to that girl,” Wylde said.

Blake noted that juggling their relationship and wrestling careers at the same time has not been that difficult.

“Since we both share a passion for both, it’s not hard to find the time. You find that you make time when something really matters.”

Wylde, trained under Whipper Watson Jr. (a.k.a. Phil Watson), has wrestled over much of North America and once aspired to make it to the WWE. In spite of harbouring misgivings about the company’s lack of direction for light heavyweights like himself, he took part in the WWE tryout in Ottawa in September 2006. But Wylde no longer yearns for the bright lights of the WWE, or even TNA, and insists he feels content on the indy circuit.

“My opinion on TNA and WWE has changed slightly. I no longer want to wrestle with politics involved. I just want to be able to do my thing with nothing holding me back. At one time, I thought it was important to prove to everybody that I was good enough to make it. Now, I have nothing to prove. I just want to give the fans the best matches I have in me. I wouldn’t be allowed to do that on TV. I’m not going anywhere and couldn’t be happier!”

Blake also attended that tryout and called it “quite a learning experience.” Unlike her fiancé, she has not closed the door on the two biggest U.S. wrestling companies and considers them both “future options.” 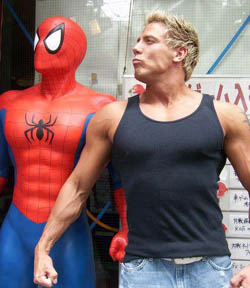 Blake’s wrestling career began in 2004 as a ring announcer. She then managed other wrestlers before training with Wylde and Cody Deaner to become a wrestler herself.

“In a way, I feel sorry for her because when it comes to training, I’m so tough on her,” Wylde said. “I see lots of potential and accept nothing less than 100% from her.”

Last year, Blake had her first singles match against Curry Man (Christopher Daniels) at the Great Canadian Wrestling Anime Expo. Although currently wrestling all over Ontario with Wylde, Blake said she was getting some attention in the U.S. and expected to head that way soon.