Danger Boy Wylde in the ring

“Danger Boy” Derek Wylde has always been willing to do what it takes to make a name for himself in this business.

Wylde is really Dennis Stewart, a three-year veteran of the sport, who comes from Welland, Ontario. As a youngster, he had a, shall we say, rather bumpy introduction to the sport.

“Oh, this is a story,” Wylde recalls fondly. “When I was eight years old, my grandfather took me to a wrestling event in Chatham, Ontario. The main event was The Sheik vs. Bobo Brazil, and Bobo went over in that match. And I went up, and it was the first time I had ever seen wrestling, I had never seen wrestling, I had never seen it on TV or anything like that. I went up to Bobo Brazil after, because I was so amazed at how big he was; I was an eight-year-old little kid. I went up and I asked for his autograph on his way back to the dressing room. He said “Sure, kid”, started to give me an autograph, and the Sheik came and smashed him with a chair. He ended up hitting me on the side of the head, I went flying, flew about ten feet across the floor, slid into some chairs. 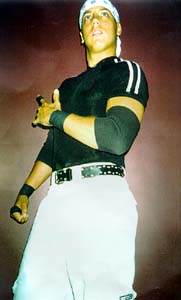 “Instead of being totally appalled by the whole thing, I was totally excited about the whole deal. I became like, I was so happy that that happened. They came up to me later, all the wrestlers said ‘Hi’ to me, gave me autographs, bought me a hot dog and pop corn, and everyone was really happy, basically, that I wasn’t suing them at the time, but at the time I didn’t know that. They paid so much attention to me and from that second on I was hooked on wrestling forever.”

Wylde was trained by Phil Watson (aka Whipper Watson, Jr.) in the small town of Picton, Ontario where the students that trained under Watson lived in log cabins. Wylde compliments Watson in saying that “he’s a very dedicated worker, pushed us really hard to train.”

It also took a lot to survive the training. Wylde recalls that there were “thirty guys who started out in the camp, and by the time it was done, eight months later, there were maybe five, six guys. So you push everyone really hard to make it, so everyone who came out there was pretty good. Everyone got a real taste for the wrestling business. We travelled around in this big school bus, setting up rings and stuff like that in little towns, wrestling in front of fifty people. That was basically my training, it wasn’t a very exciting time, it wasn’t a very good time in my life because it was so hard. It was probably the hardest thing I ever did but I’m glad that he pushes so hard at the time, because it gave you a good feel for the wrestling business, not to be lazy, because you’ll never make it anywhere.”

Since leaving Watson’s school, Wylde has wrestled in such organizations as the New Jersey-based USWF, ICW based out of Rochester, NY, Independent Superstars of Pro Wrestling (“with guys like Devon Storm, Ace Darling, guys like that on the show”) as well as the Ontario-based Universal Championship Wrestling, Hardcore Wrestling Federation, and the CWA.

“Every where in the States”, is how Wylde describes where else he has wrestled. “Everywhere I can think of, like Michigan, Wisconsin, New York, Jersey. Anywhere I can get in for twenty-five bucks, for anything at all, as long as they paid my gas. Some were great experiences, some weren’t very good, but what are you going to do.” 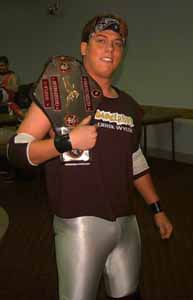 When asked for a highlight of his career, Wylde picks out a match he and Dane Jarris (who were known as the Stealth Bombers) had against The All-Knighters on August 7th. “I just wrestled, about a month ago at Langley Air Force Base, in Virginia. Pretty big crowd there. It was just really cool to be wrestling for a bunch of G.I.’s on an Air Force base. It was a really good time.”

“I’ve never done any TV,” he admits, but says that’s about to change. “I start a TV deal next month, that’s another big thing that’s coming up. Just for this small place in Rochester, it’s going to be on Fox 31.”

The lack, so far, of TV exposure, doesn’t seem to bother Wylde, however. “I’m really glad that I have a good, strong fanbase here in Ontario. A lot of people who follow wrestling in Ontario know who I am, because I travel everywhere in Ontario.”

It now appears as if all his hard work may be paying off. On August 10th, he competed in a three-way match with Dane Jarris and Tyson Dukes on a CWA (Ricky Johnson’s promotion, later renamed the WWA) card at Medieval Times in Toronto on August 10th. Wylde lost that night, but around 9:30 the next morning, he received a telephone call.

It was from Terri Patterson of the World Wrestling Federation Canada, asking Wylde to send them a video of his work for them to take a look at.

Wylde isn’t sure whether it was on the basis of his performance the previous night that the WWF decided to give him a call.

“She (Patterson) said she didn’t know; her boss had just informed her to give me a call.” Wylde remembers. “I think it was because somebody spotted me at the show, which I did really good, I got a lot of pop from the fans. I was really over with the crowd, I had ‘Danger Boy Cheering Sections’ all over the place, so I was really over even though I didn’t win. I even got a standing ovation at the end of the match, even though I didn’t win.”

No matter what it was that prompted the WWF to call, Wylde is excited about being given the opportunity to prove himself to the Federation. “This is what I’ve wanted my whole life. This is basically what the last three years of my life has been for, just to receive that call. Even if it doesn’t lead anywhere right now, it just keeps you going. Maybe they might not think I’m ready yet (I think I am, personally) but I know I have a lot to learn still, but I think I’m ready to go to the next level, so the reaction keeps me going.”

“I always wanted it (an opportunity to wrestle in the WWF) to come, but I never expected to hear from it this soon, maybe five years down the road.” As for his future in TV, we can expect to see Wylde on a future episode of Fox’s “Party of Five”. The producers of the show decided to cash in on pro wrestling’s current popularity by featuring a wrestling segment on the show. However, rather than pay the big bucks for WWF action, they decided to use footage from the USWF, including a match that Wylde was involved in.

Should he make it to the WWF, Wylde, a former RWA Cruiserweight Champion, is hopeful that the WWF will reintroduce their light heavyweight division. “I guess I’m hopeful, because Terry Taylor’s there and he’s the guy who instituted the cruiserweight division in WCW and gave the push for all the small guys, but it just seems like he doesn’t have the power there (in the WWF) to get the push for the small guys now. They have good workers there now, like Funaki, Papa Chullo, all the good lightweights and they’re just not doing anything with them. I’m so surprised the Hardy Boys are where they are now actually, because they work so hard every match and it just seems like they job out a lot, which is good because I didn’t even expect them to be there. (The return of Gillberg and the WWF Light Heavyweight title) gives me hope that they’re going to re-institute it but I still don’t think they have any idea what to do with it, which is not really an insult.”

As for the state of the cruiserweight scene today, Wylde says that their fortunes are “better than they were five years ago, that’s for sure. Taken a little bit more seriously, but not as serious as we’d like them to. I firmly believe that there could easily be a light heavyweight main event at a pay-per-view. I mean, these guys have the potential to work a main event better than anybody in the business. A lot of light-heavyweights have the most potential to work, they’re the greatest workers around, but they just won’t get the push because of the old-school thinking.” And Wylde is hopeful that he will be among those who will shape the future of the WWF’s light heavyweight division, and philosophical about his own future in pro wrestling. “There are no limits, you know, I’ll ride this business as far as it’ll take me, I’ll never give up. If the WWF is listening, I’m going to call them every day until they hire me. I know I have potential, sign me, sign me!”