Some fans remember him as the man who carried Governor Jesse Ventura through his first match. Others recall him as the harmless, yet lovable jobber who got paid to make the other guy look good. Cast in his role as a ‘prelim bum’ by the fans, he was always thought of as nothing more than average.

Yet the reality was that Omar Atlas was anything but your average, run-of-the-mill, wrestler. Having spent over 30 years in wrestling, Atlas traveled the world, wrestled every major star and worked for every big name promoter. He was the archetypal journeyman, bouncing between promotions, staying in one place only a few months before he headed off to the next territory. 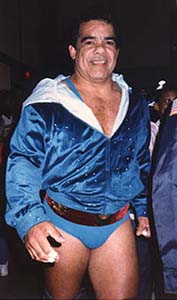 It was a hard life but it’s one that Omar Atlas doesn’t regret at all.

“I had a really good time in wrestling,” Atlas told SLAM! Wrestling recently from his home in San Antonio, Texas. “I traveled a lot. We didn’t make much money but we had a lot of fun.”

Atlas started in wrestling as an amateur back in high school in his native Venezuela. He competed at the 1958 Central America/Caribbean Games and went to Spain later that year. While in Barcelona, Atlas began to train for his pro debut.

“The gym I wrestled in had guys from Argentina and Mexico,” remembered Atlas. “I was learning from them a little bit at a time.”

Atlas turned pro in Spain spending eight months there before moving on to Colombia. For the next four years, Atlas bounced around between South America, Mexico and Spain. It was in 1962 while in Spain that Atlas received the opportunity to come to the U.S.

“Cyclone Negro was in Houston and we were very good friends,” recalled Atlas. “He called me in Spain and told me to come over, that the promoter needed some South American guys.”

That promoter was Morris Sigel. Atlas gained his first taste of American wrestling while wrestling for Sigel. In 1963 Atlas left Houston and began a whirlwind tour of all the major wrestling offices. Atlas moved from territory to territory, staying only long enough to build up his reputation before another promoter called him up wanting to procure his services.

Of all the territories he worked for, Atlas counts his days in Roy Shire’s San Francisco territory as his favorite.

“I really liked working for Roy Shire,” admitted Atlas. “He had good houses at the time and all the cities (in the territory) were close, all within 150 miles.”

Like everybody else who has worked for him, Atlas says that Portland promoter Don Owen was the most honest and nicest promoter he worked for.

“Don was a very good man and a very good promoter. I was in a eight-man battle royal one time up there and somebody threw me over the top rope and I almost touched the lights. Everybody thought I was dead!”

In 1970, Atlas made his way up north to Stu Hart’s Stampede promotion where he fought the likes of Abdullah the Butcher and Harley Race. His stint in the Calgary based promotion included a run as North American Heavyweight champion.

“I really liked Calgary,” said Atlas. “It was a beautiful city and I enjoyed working for Stu Hart. I have a lot of respect for him and I had a good time there.”

During his time in Calgary, Atlas was a regular at the Hart household, having dinner with Stu and his family and the other wrestlers. But of all the time spent at Stu’s house, it’s a cold night in Saskatoon that Atlas remembers most about his time in Stampede.

“It was 50 below zero and the mat was like ice,” laughed Atlas. “I was in the first match and it was in front of 37 people, all Eskimos. Nobody said a word and I was working my ass off.”

After Calgary, Atlas split the next 12 years between Puerto Rico, working for Carlos Colon, and Bob Geigel’s Kansas City promotion. In between he made his way to Australia, Korea and Japan where he worked for both legendary Japanese promoters Antonio Inoki and Giant Baba.

It was in the Kansas City territory that Atlas wrestled Jesse Ventura in his first pro match.

The two were scheduled on a card in Cedar Rapids, Iowa when the promoter pulled Atlas aside. Unsure of Ventura’s ability, he told the veteran Atlas that if he thought Ventura had promise to let Ventura throw him over the top rope and get DQd. Otherwise, Atlas was instructed to shoot on Ventura and beat him up.

“Omar thought he was doing well and told him to throw him,” said Charlotte, Omar’s wife of 15 years. “In (Venutra’s autobiography), Jesse writes that Omar, not being one of those egotistical guys in wrestling, told him ‘Amigo, throw me over the top.’ He also credited Omar with helping him start his career.”

From Kansas City, Atlas moved onto the WWF just as Vince McMahon Jr. was taking the organization national. Atlas, in between his dates with other organizations, worked as a prelim wrestler for McMahon starting in 1984.

Atlas has fond memories of his WWF tenure.

“(While in the WWF) I wrestled Randy Savage, British Bulldog, Honky Tonk Man, Jake Roberts and Ted DiBiase. I really liked Vince. He was very good to me.”

Atlas retired in 1993, after a long, and storied career.

“I was working part-time and I wanted some security and benefits and insurance and in wrestling you don’t have any of that,” explained Atlas. “I was afraid of getting hurt and being let go by the promoter. Plus, I was really tired of the traveling.”

Today, the 61-year old Atlas is a security monitor for the Bexar County Adult Probation Department. When he’s not escorting convicted criminals to their work details, he keeps in shape by playing handball three or four days a week.

“He’s quick and agile for his age,” said his wife Charlotte. “He runs circles around all the younger guys.”

Omar Atlas embodies the true spirit that defines this sport. His was a life where promoters were always looking to stiff the wrestlers on their pay. A life where men were estranged from their families, living out of suitcases while traveling down the long, lonely roads to the next town. A life of spilling blood on canvases and breaking bones in smoke filled arenas before small crowds.

And there’s nothing average about that.