This weekend marks a rare chance to see a Mexican wrestling star on her home turf. But in a bit of a switch, it’s “Girl Dynamite” Jennifer Blake working in Toronto, rather than her regular locales, like Mexico City and Veracruz.

Ontario fans will remember Blake as a valet for “Dangerboy” Derek Wylde a few years back, until she decided to make the leap to being a professional wrestler as well four years back. For the last three years, her primary employment as a wrestler has been in Mexico, and she is one of the rudos on the Asistencia Asesoría y Administración (AAA) roster. 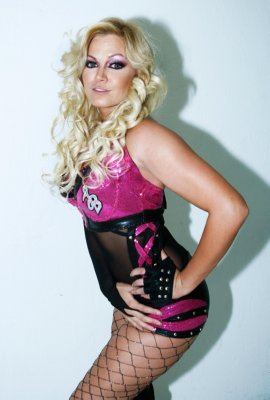 She can’t wait to strut her stuff Saturday with the Union of Independent Professional Wrestlers promotion in Toronto’s east end.

“It’s really cool, especially to see everyone, to show some of the guys that I started out with how I progressed,” Blake told SLAM! Wrestling. “One of the biggest things I find now is that I’m so much more comfortable in the ring. I show a lot more confidence than when I was first starting out.”

Her days as a valet, which began in 2004, are far behind her. “I like wrestling a hundred times better than managing.”

The regular work has helped tons with her skills, she admitted. Getting in the ring many times a week is a big change from what she was used to when she was based in Niagara Falls, Ontario, working maybe a couple of times a month.

“You can go to class and you can learn everything, but there’s really no way to teach what it’s like in front of a live audience,” she said.

And those crowds in Mexico sure are something.

“They’re insane. I’m a heel down there and I work with Konnan a lot. We have people throwing beer at us, throwing their cups, bottles, batteries — you name. They’re crazy,” she laughed.

Blake learned there was nothing to be scared of. “Honestly, usually with the Mexican fans, when you’re out there, it’s a show, but afterwards, they’re begging for your autograph, they all want pictures and stuff. So they get right into it during the show, then afterwards, they don’t care.”

The 5-foot-7 blonde bombshell was stationed in Florida when she heard through friends that Extreme Air Wrestling, a small Mexican promotion known for its side-by-side rings at different heights, was looking for wrestlers. She landed there, and a short while later, veteran woman wrestler Rain tipped her off that AAA wanted to expand their luchadora roster.

“The Mexican female wrestlers are amazing,” Blake said, explaining that there are even some veterans still working the scene who go back to the Bull Nakano, Manami Toyota era in Japan.

Adapting to the Spanish language has been hard, she admitted. “I find it pretty difficult, mainly because I hated French. Being a Canadian, you’re forced to learn French and I find it very similar, Spanish very similar to French in how they string together their sentences and everything. Some of the words are pronounced similarly as well.”

What has been the secret to her lasting power, where others have come and gone?

“I don’t know. I have a good attitude. I don’t complain. It’s not the easiest environment to work in, or live in. It’s not for everybody,” she said.

Having Konnan, one of the powers behind AAA, as one of her supporters has helped as well. “Konnan has been really cool. He’s always given me really good advice, had my back and everything. Of course, being down there three years, I’ve made a lot of friends. I get along with everyone pretty well. I haven’t had any problems with anyone or anything.”

Back in December, Blake got pneumonia and ended up back home to recuperate. While her body heals, Blake has been learning a new skill from her mother, Janice Ykema. “I’ve taken up painting. My mom’s an artist, and she’s really good. She’s been giving me lessons.”

The Mexican wrestling schedule is traditionally a little lighter at the beginning of the year anyway, she said, so it has been a good time to be home, visit family and friends, train a little in Niagara Falls at the Neo gym. She has started taking the occasional booking again and will be back in Mexico soon.

There are elements of the scene in the U.S. and Canada that she misses.

“I’d love to do SHIMMER again. I always had fun working the SHIMMER shows and working the girls from North America,” Blake said. “It’s always easier to put a match together with someone who speaks the same language as you. That’s always a treat, coming home and wrestling the girls.”

What is the next step? She has had tryouts with both WWE and TNA, but is content to keep on keeping on doing what she is doing.

“I don’t think I’ll ever quit, because once you get that wrestling bug, it’s hard to really pull yourself away from it.”

Check out Jennifer Blake in action at the Union of Independent Professional Wrestlers on Saturday, April 14th at the Todmorden branch of the Royal Canadian Legion (1083 Pape Avenue @ O’Connor) in Toronto.