Canada is preparing itself for a dose of “Hunk Hunka Honky Love” this month. The Honky Tonk Man returns to his roots this month appearing at WrestleReunion this weekend in Toronto and the Calgary Comic and Entertainment Expo April 27-29th. Although both are fan events, they have a different audience.

“There is a different mixture of fans, the casual fan comes to the fan expos and comic-cons, things of that nature. They may have been a fan 20 years ago but don’t watch anymore, where at WrestleReunion you get the pure actual wrestling fans not the casual ones,” The Honky Tonk Man explained to SLAM! Wrestling. “It is a totally different vibe, more of a wrestling fan targeted audience as opposed to the Calgary Expo that is SciFi, Movie Stars, Superhero type things.”

A Ricky Steamboat autograph signing at a Winnipeg “World of Wheels” event led Chris Jericho on the path to wrestling. Although wrestlers appearing at trade shows isn’t new, it has really picked up in recent years.

“Wrestlers didn’t really start getting involved in these things until the last four or five years. We would do things like World of Wheels through the WWE office, they would send us to those type of things. But as far as things like the fan expo in Calgary, the wrestlers weren’t really part of it until the action figures became so popular,” said the Greatest Intercontinental Champion of All-Time. “We are superheroes, television attractions and entertainment attractions to the public and the fans. With the action figures and a lot of wrestlers doing things like movies and things of that nature. I think that is the appeal.”

Honky joins stars like Rowdy Roddy Piper, Bruno Sammartino, Jushin “Thunder” Liger, Fit Finlay and more this weekend at the Doubletree by Hilton-Toronto Airport. Honky’s first WrestleReunion was in January in Los Angeles, when he, Greg “The Hammer” Valentine and Jimmy “The Mouth of the South” Hart recreated Rhythm and Blues for a photo opportunity. He returned for WrestleReunion in Miami WrestleMania weekend as well. 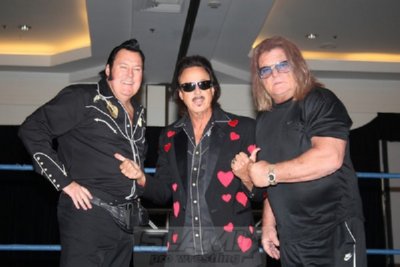 The Honky Tonk Man, Jimmy Hart and Greg “The Hammer” Valentine recreate Rhythm and Blues at WrestleReunion in Los Angeles in January 2012.

“It was fun, the best part was Valentine having to go upstairs and spray paint his hair. He didn’t want it to go black because he never liked having the black hair,” he recalled. “I have done smaller signings and things of that nature but WrestleReunion was different in that I had done so many of the fan expos that aren’t real wrestling fans. I saw these were the real fans with memorabilia and T-shirts and there just for the wrestlers. There were 75,000 wrestling fans hanging around in Miami. I look forward to them and enjoy it. It is a long day signing autographs and up and down doing photos but that is what I do. Toronto is a great city, to me it is the New York of Canada. There are a lot of great wrestling fans there. I am looking forward to being there. I think Canadian wrestling fans are the truest, most honorable fans of all. They American wrestling fan critiques us a little bit more than the Canadian fan.”

Honky has a long history with Calgary, having lived and worked there in the 1980s. He married a Calgary girl and has often returned for independent wrestling events. This is his second time at the Calgary Comic and Entertainment Expo.

“I spent so much time there and lived there on 16th Avenue in the northeast. My wife is from Calgary, my son was born there and a lot of my in-laws still live there. I have a message from one of the Harts on my phone to get together. It is great to get back, I missed the Expo last year but I am excited about it,” he said. “It will be a great crowd and a lot of great wrestling fans come from all over the place to come to the Calgary Comic & Entertainment Expo. The Calgary people have done a wonderful job, it started out really small and then mushroomed up. I was there two years ago when Leonard Nimoy was there and they had a turn-away crowd and they are expecting bigger and better things this year.” 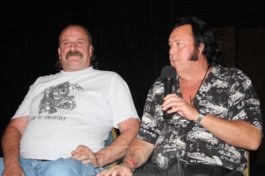 Jake “The Snake” Roberts and The Honky Tonk Man at WrestleReunion VII in Miami on Friday, March 30, 2012. Photos by Christine Coons

“It was interesting to find out that Jake will be there. I think this is one of his first fan expos and I think he might enjoy it and think about doing some more. I do them all over North America. WrestleMania III with Jake was exciting to the point that there was so many people, but there were so many of them you didn’t see them — 90,000 people look like ants sitting there,” he recalled. “The match with Jake was fun and it was a great buildup, we had a great time doing it. What a lot of fans don’t understand is when we went into WrestleMania III we had already been 40 or 50 days on the road and we were just waiting for this thing to be over so we could get a couple of days off. We really didn’t realize, and you don’t when you are in sports or entertainment, what an impact something will have later in life.”

At 59 Honky Tonk Man is still active as a wrestler, but it is a nice break to not have to step into the ring and instead just spend time with the fans.

“I enjoy it because they are just excited to see us. Fans are going to be excited to see Jake in Calgary. You get a lot of repetitive questions — I’ve heard everything after 25 plus years — but someone always asks something that I have never heard before or brings up something that creates a memory and will get me going telling a story. I am a good guy now not a bad guy and the fans love to see me that makes it more fun. I am not worried someone is going to say something nasty about me the way they did years ago, they love to sit around and talk to me. I like the interaction with the fans and how up close and personal it is. We spent all our time in WWE many years ago, they were so controlling and wouldn’t let us get up close to the fans or do autograph signings without security people around and done in a specific way. You being a media person, if you didn’t get it cleared through the WWE office I wouldn’t be able to talk to you. I love the freedom right now, that’s what I like.”

Jason Clevett will be attending both WrestleReunion and the Calgary Comic & Entertainment Expo.