Beulah McGillicutty puts the ‘great’ in Gertrude the Great

Albert Einstein once said: “Everybody is a genius. But if you judge a fish by its ability to climb a tree, it will live its whole life believing that it is stupid.”

Armed with that philosophy — and a whole lot of determination — Trisa Laughlin set out to put to paper a little bit of her life.

The result is her recently published children’s book, Gertrude The Great, aptly titled too, if you ask this writer/dad. Simply put, it’s great. 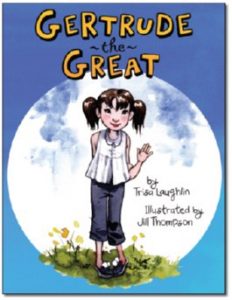 Laughlin is the wife of legendary professional wrestler and Whig-Standard columnist Tommy Dreamer. She too spent a number of years in the business of pro wrestling (as ECW’s Beulah McGillicutty) before she left the business to start a family and, eventually, become a published author.

Tommy and Trisa live in New York and are the proud parents of twin girls.

Other than the fact that it is printed on paper, very little about Trisa’s path to becoming published was conventional.

Quite to opposite actually. It was a very long and arduous process. While I could sense her smile over the phone during our chat this week, it became quite evident that there were times when smiling was the furthest thing from Trisa’s mind.

“It’s been over three years,” she said of the process of taking her creation — Gertrude — from her imagination and putting it in the pages of a book.

At first, publishing it was not even a consideration.

“I started writing it … because it was in my head and I thought it might be a good story for my kids because my one daughter always wanted to be first at everything and it reminded me of when I was a kid,” Trisa said. “I have several older siblings, and my closest sister is three years older than me and I always wanted to beat her at something and never could.”

Trisa’s story is about Gertrude, a young girl who desperately wants to be as good at something as her big sister.

Gertrude looks up to her sister so much, but she gets caught up in her own quest to be better at something.

Gertrude swims. Her big sister, Kate, skates. They draw together, but big sis’s picture is better.

They play checkers. You know who wins.

It’s not so much a story, says Trisa, as it is the story — of her life.

“I can remember specifically playing tag with all the kids on the block, and I, being the youngest … they would always make me the ‘it,'” she said. “And I could never catch anybody and it used to make me so upset.

“I can remember how frustrating it was that I couldn’t quite keep up because they were three years older than me. My mom used to tell me, ‘you know what, of course they’re faster and stuff, they have longer legs, they’re older than you.’ As a kid, it doesn’t make you feel any better hearing that from your parents,” Trisa added.

It was after writing out her story of Gertrude that fate kicked in.

“Long story short, some of my friends kept saying I should try to do something with it,” which led her to read it to wrestling legend and best-selling author Mick Foley, himself an accomplished children’s author.

Foley put Trisa in touch with his illustrator, Jill Thompson.

In turn, Thompson put Trisa in touch with various publishers. While she got really good feedback, Trisa said, there seemed to always be one reason or another for not proceeding with publishing the story of Gertrude.

“I called (Thompson) back and I said, ‘thank you so much, but so far I don’t really have anybody serious about it, what do you think I should do now?’ ”

Much to her surprise — and delight — Thompson suggested she find an illustrator before promptly offering her services.

“I was so shocked because she is such an accomplished artist … that she would be willing to put her name on my book, I (was) so flattered,” Trisa said.

The obstacles didn’t end there. 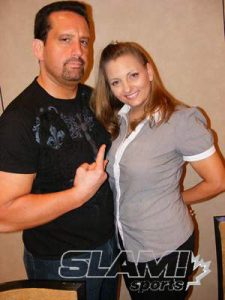 “Publishers … want you to sign your rights away … I didn’t want to do that,” Trisa said. That left her facing the question of whether or not to proceed. She decided she would.

“I applied for the copyright, I (obtained) the ISBN number and then (came) the biggest task of all — trying to find a printer,” Trisa said.

Eventually, she would find one, in Canada, no less.

“We ended up finding a fantastic, fantastic printer in Winnipeg and they are nothing but amazing,” she said, emphasizing that the final product is nothing short of the highest standards.

“And now comes the tedious task of trying to promote it,” she said.

Trisa says there are few words to describe the feeling when she opened the first box of her books when they arrived.

Her daughters were present for the big event.

“One was practicing the piano and the other was there … she was helping me open the box,” Trisa said. “She pulled it out and she just gasped when she saw the books. She goes ‘can I have the first one?’ And I said of course and I handed it to her and then she hugged it like it was some precious gem.

“Five minutes later, Tommy goes ‘you have to look outside.’ I looked outside and she was reading it to the dog. I looked at him and I said, ‘I don’t care if I don’t sell a single book.’ That made it all worthwhile right there. Just the look of how proud she was and how excited …

“But boy was that gratifying, though, actually having a physical copy in my hand, that was like ‘yay, I did it, finally.’ ”

The aforementioned Einstein had it right, though, Trisa said, when he coined that phrase.

“Everybody’s got their own special something that they excel at,” she said. “It’s a matter of finding it. Not everybody’s going to be good at the same thing.

“I kind of wanted to get that message across to my daughters. I mean they’re not real competitive, but they do get frustrated. I have one that’s very sports-oriented and one that’s very book-oriented. I don’t like it when kids don’t do things because they’re not as good as everybody else. I feel if you enjoy it, you should do it anyway, whether you’re good at it or not.”

Without spoiling what is a fantastic finish, let’s just say Gertrude eventually finds herself.

“I knew that there was lots of kids out there like (Gertrude),” Trisa said. ”

Speaking of the ending, if you can believe it, the last four lines of Gertrude The Great were the first four lines written. In essence, Trisa finished the book before she started it.

The book’s illustrations are, well, great too. From Day one, there was instant chemistry between Trisa and Thompson.

“One thing that I really do love about Jill is that she gets what I see in my head,” she said. “For somebody who can’t really draw, it’s very frustrating trying to get it out on paper what you really see in your brain. For somebody to be able to be almost the same mind as you, be able to draw what you see, is so satisfying.”

The inspiration for Gertrude’s name, ironically and appropriately, was born from another children’s book.

“When our girls were born, they had to stay in the hospital for a little while,” Trisa said. “I brought them Yertle the Turtle, by Dr. Seuss, and in that book, there are three stories and the last one is called Gertrude McFuzz. My daughter, Brianna, used to cry, she was really fussy, and I used to call her Gertrude McFuss, instead of Fuzz. I would just call her Gertrude and that name kind of stuck …”

Much like the Gertrude, Trisa has triumphed, putting to paper a story that has been a lifetime in the making. No longer is Gertrude a part of her imagination, but rather a reality, one that can inspire little sisters and brothers everywhere.

Readers may not have seen the last of Gertrude, which, from this father’s perspective, would be a, er, great thing.

Trisa revealed that she has written about 80% of second Gertrude book, one that sees the youngster afraid to go to sleepaway camp.

“Which is 100% my life when I was a kid,” Trisa added quickly. “I wanted to go to sleepaway camp, but I was afraid to go because I didn’t know anybody, there was going to be no TV … being away from your family and friends for at least six weeks, that’s stressful for a kid sometimes.”

For her part, Trisa isn’t sure what her future holds, writing-wise. Just that it holds writing.

Armed with that Einstein philosophy, that will to succeed and a great imagination, there really is no looking back for Trisa.

“It was such a great learning experience,” Trisa said. “I’m so happy that I actually did it. I feel like I stuck with something and I feel like it’s a good example for my daughters to see it from start to finish.”