Chief Jay Strongbow, the WWWF star who died today, was always a pretty matter of fact guy, someone who saw his role as a star wrestler as a job and never expressed a great love of the business.

In a 1977 interview with the Newport, Rhode Island Daily News, Strongbow complained about the miles and miles of driving required by professional wrestling. 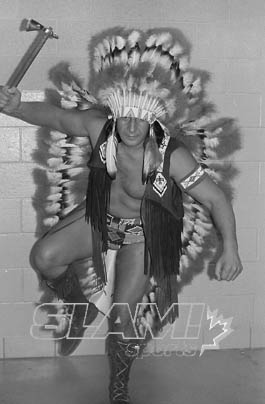 “That’s the worst part of it,” said Strongbow, then a 16-year-veteran. “The hassle of the traveling and being away from my family. People think it’s a good life but they don’t realize what a hassle it is.”

In the shoot interview he did with Highspots.com, Strongbow was dry and unappealing, giving short answers and revealing little. If it wasn’t quite outright bitterness, it wasn’t very far from it. Take, for example, his thoughts on promoters: “You were just like a piece of meat to them; if you couldn’t produce, you were gone.”

Yet he stuck with pro wrestling for four decades, and was someone that WWE ring announcer Howard Finkel called “one of the greatest people ever to put a pair of tights on.”

He was born Joseph Luke Scarpa in 1932 in Philadelphia, and began his wrestling career around 1957 as “Joltin'” Joe Scarpa, with his first bout against Al Galento.

“I had an opinion about pro wrestling, until I wrestled and they showed me that my opinion was wrong,” Scarpa said in the aforementioned December 2003 shoot interview with Highspots. “I learned that I wasn’t as bad as I thought I was.” Those early years were rough, with mat burns on the arms and chin. “They’d scoot you along like a vacuum cleaner,” he complained.

Early in his career, the 6-foot-2, 265-pound youngster got some publicity in Chillicothe, Mo., before a bout with Bob Orton Sr. “Flying Joe caters to barefoot stylings, patterned after the famed offensive of Argentina Rocca, one of wrestling’s biggest names,” reads the newspaper story. “Scarpa admits he uses Rocca’s methods on occasion but says his unorthodox style is all his own Many wrestlers like to cavort around the ring barefooted. Scarpa claims it gives greater agility and so far no one has questioned that. His leaping style has proved the undoing of many foes, simply because he managed to get an advantage before they could get set.”

It’s a far cry from the ground-based, war-dancing Chief Jay Strongbow he would become years later.

Under Joe Scarpa, he wrestled about eight years, primarily around Georgia, Florida and Tennessee. Along the way, he captured a number of titles, both singles and tag teams.

One of his championship teams was with Don Curtis (Don Beitelman) in Florida and Georgia.

“He and Don got along beautifully. They really had a super tag team for the time they did together,” said Curtis’ widow, Dotty. “They gelled well together, they traveled well together, they worked out together. They were close in the ring as well as outside of the ring. They stayed together day and night. His wife and I became very close.”

In fact, said Dotty, Scarpa was at the hospital when the Curtis’ youngest daughter was born. Later, the Curtis’ were pleased that Scarpa and his wife, Mary, a native of Charleston, W.Va., had adopted a son, Mark, who would later wrestle as Mark Young.

“He trained every day with Don. He was in fantastic shape, because Don trained, and if he was going to be a partner, they ought to be in shape too. He trained with Don, and he was probably in some of the best shape I had seen him in,” said Curtis of The Chief. “Looking back at some of his pictures, he really leaned down when he and Don were together because they worked out so well together.”

In 1964, Scarpa was a part of a tragic incident in Savannah, Georgia, when he was teamed with the veteran Tex Riley, against Kurt and Karl Von Brauner. Following the bout, Riley complained of chest pains, and died that night in Memorial Hospital. 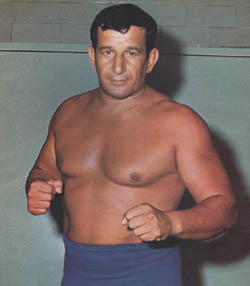 During his time under his real name, Scarpa helped shape a number of other careers, including Jack Brisco, Jimmy Garvin and Bill Watts.

“It is easy to see, I am sure, what a great influence Joe had on my career. He opened a lot of doors and went to bat for me when no one even knew who I was. He treated me like a son. It was not just with kind words and actions but with chastisement when I needed it,” Brisco wrote in his autobiography. “Joe also coached me on how to be a good worker and what to do to draw money. Those were two things that he was always serious about. I learned quickly that when he talked you had better listen. If you didn’t he was through with you.”

In San Francisco, Watts teamed with Scarpa. “I learned a lot from Joe Scarpa because Joe Scarpa was a great teacher. He had great timing, yet he’d never made any money at the time,” Watts said, talking about the miles and miles on the road, listening to his partner. “What a hell of a guy to have bending your ear than Joe Scarpa. This is before he became Vince’s star Indian. That was how the business was taught in those years.”

According to Scarpa, it was Gorilla Monsoon that suggested he call Vincent J. McMahon, who was looking for an “Indian character” for his WWWF territory in 1970. Though of Italian descent, Scarpa often said that his mother was Cherokee and that is where the Jay Strongbow name came from — “a lot of people didn’t know that,” he said.

With his long, black hair, war dress, frilled boots, his war dance and the Indian Deathlock and Tomahawk Chop holds, Strongbow became such a star in the WWWF that he was inducted into the WWE’s Hall of Fame in the inaugural class of 1994.

Chief Jay Strongbow was an identity that he kept for the rest of his life. Curtis recalled a flight she took with Scarpa to a fan fest. “He did not want to be called Joe. He wanted to be Jay, and made a point of telling me that he had a lot of Indian in his family. Of course, I’ve always thought of him as mostly Italian,” she said.

“He was an Italian and he lived it like an Indian. He really lived like an Indian,” said Tito Santana. “He drove around in an old pick-up truck and wanted the people to think he was one of them.”

While perhaps not everyone bought the Native-American gimmick, few can deny that Strongbow was a star, perhaps only second in stature to the WWWF World champions during his time there. He held the WWWF tag team titles four times, once with partners Sonny King and Billy White Wolf (later Sheikh Adnan Alkaissy), and twice with his “brother” Jules Strongbow (Frank Hill).

“For the first five years I was in the WWF, every arena I went to sold out,” Strongbow bragged in a 2009 profile in his hometown Griffin, Georgia, newspaper to coincide with his induction into the Amsterdam, NY, Pro Wrestling Hall of Fame. Strongbow often brought up the 118 times he wrestled in Madison Square Garden, claiming that it was more than any other performer.

When Bruno Sammartino and Pedro Morales ruled the roost, he was the next babyface in line; when Superstar Graham was the villainous WWWF champion, Strongbow was a frequent opponent, though they did not see eye to eye.

“We never had fun together in the ring. I felt that he was rushing our matches, and wondered whether he was trying to blow me up,” Graham wrote in Tangled Ropes. “I never connected well with Strongbow because, among other reasons, he was incredibly cheap. During an earlier incarnation he’d worked in carnivals, sleeping in the wrestling tent, so I understood his frugality. But the man was always on edge over saving a penny.”

Finkel said Strongbow never needed the world title. “The true people’s champion in my eyes and we announced him that way, as the people’s champion. He had magnetism, he had tremendous grit inside the squared circle, and he knew how to play on the emotions of many a fan.” 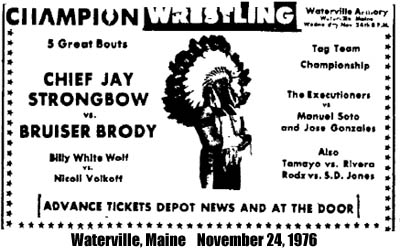 As his career in the WWWF wound down just as the national expansion was taking off around 1983, Strongbow was called upon to act as a road agent, handling many duties backstage, and filling in on the cards when required.

Santana said that Strongbow was a good influence. “He knew the business. He taught so many of us the psychology of being a babyface. He was a true babyface. He knew how to sell, sell, sell, and then once he started coming, once he started that Indian dance, no matter how hard they hit him, they weren’t going to knock him down. I think a lot of us, especially Hulk Hogan, learned from him. He was the master babyface.”

Graham called being a road agent the “unenviable job of supervising the boys backstage.”

“Given his position of authority and notorious miserliness — he acted like every penny the company spent came from his own pocket, and was known to order eight or nine jobbers to share the same hotel room before a TV taping — the wrestlers loved goofing on Strongbow,” wrote Graham. “Bret [Hart], a gifted cartoonist, would regularly search for a blackboard backstage, then sketch a profile of the Chief, with an enormous bubble waist and huge nose. Minutes later, Strongbow would come into the room, notice the portrait, and just lose it.” 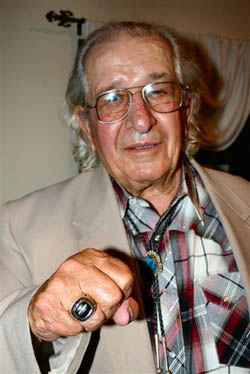 Chief Jay Strongbow shows off his Pro Wrestling Hall of Fame induction ring in May 2009. Photo by Dave Burzynski

“They knew that I knew what I was doing, and the majority of the wrestlers respected me for what I was. They knew I knew wrestling,” Strongbow said in the Highspots interview, where he talked about the headaches, fining Junkyard Dog $5,000 for smoking a joint in the arena, leaving a tardy Scott Hall behind when he was late for the bus in Germany, Mr. T and “Dr. D” David Shults coming close to killing each other, or banning beer on the buses before shows — after the shows was fine.

His health deteriorated, and Strongbow was forced to leave his road agent job. “I got sick. I had two heart valves replaced. I found out there were better things to do than that.”

Away from the ring, Strongbow loved to golf and fish, and enjoyed quiet time on the farm in Griffin. In 1994, he was brought back on WWF TV as a mentor for “Native American” Tatanka, but it was a short-lived deal. Years later, Strongbow would complain that Tatanka lived “in a fantasy world.”

“He was a good person, but he wouldn’t listen to me, too interested in girls and other things,” he said.

Strongbow did make it to his 2009 induction into the Pro Wrestling Hall of Fame, delivering a very brief acceptance speech, and a Charlotte fan fest in 2010. Reggie Parks was excited to see his old friend there, but came away disappointed. “We just sat there, and you could hardly get a conversation out of him. ‘Yeah, uh huh, yeah, uh huh. Okay,'” said Parks.

In late 2011, Strongbow suffered a fall at his home and was hospitalized. His health never improved and he died April 3, 2012.