Jody “The Assassin” Hamilton comes from an era that gives genuine meaning to what has become a somewhat clichéd phrase — “passion for the business.”

In his nearly 300-page (including index) autobiography, Assassin: The Man Behind the Mask, Hamilton recalls a wrestling era sharply different from today’s. In his time, heels had to fend for their lives from overzealous fans, and performers generally moved from territory to territory for years as they strove to hone their craft, move up the card and most importantly, earn a good living. 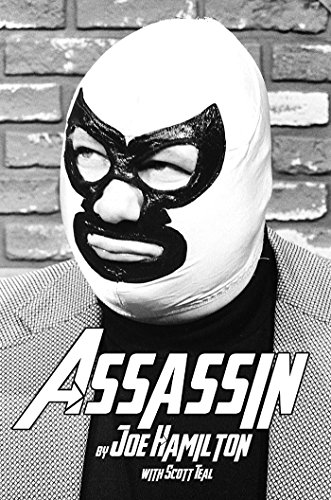 The St. Joseph, Missouri native spent close to 50 of his 67 years in wrestling and almost 30 of those under the hood. For good or ill, many like Hamilton were lifers of the business. No sabbaticals existed for wrestlers who needed a break to recharge their batteries or go make movies.

There were no wrestling schools to guide fresh faced recruits when Hamilton broke in. He learned genuine wrestling from a group of shooters at the YMCA, who proceeded to stretch him for three years.

Hamilton had the good fortune of being able to follow his older brother Larry into the professional ranks in 1957, joining him for a brief stay in New York. Larry’s experience would make life easier for Hamilton in New York as he acted as a protector for his younger brother. But soon, he would head off on his own, leaving his younger sibling to cope for himself. Hamilton did just that, thanks to another contrast in wrestling then and now — back in the day, an independent could make better than decent pay. (Hamilton earned several hundreds dollars a week even when he was not yet a consistent top attraction.)

His status and earnings would improve considerably in October 1961 when The Assassin gimmick was born. Atlanta promoter Ray Gunkel wanted Hamilton in a mask, and Hamilton, looking to hang around close to home for awhile anyway, thought he might as well give it a shot, at least until something better came around.

He went on to team with his brother’s former tag partner Tom Renesto, forming a 15-year partnership as The Assassins. Renesto would prove to be a huge influence for Hamilton, mentoring him on wrestling under a mask and in making sincerity the most important facet of a good interview.

Hamilton’s wrestling experiences went beyond the ring, and with co-author Scott Teal, he shares many of the lessons he learned behind the curtain. Working in various offices as a booker, he learned just how often personal vendettas and parsimony impeded good business decisions. And as a promoter of his own Deep South Championship Wrestling, he would come to discover a disappointing lack of loyalty among his main event performers.

Possibly Hamilton’s most rewarding period in wrestling came as a trainer. He considered teaching at WCW’s Power Plant a highlight of his career, and he obviously enjoyed it enough to endure going back and forth with WWE Talent Relations in order to open for them a training centre. (He would finally be able to re-launch Deep South for WWE in September 2005, but WWE ended its relationship with the promotion April 2007. Hamilton stopped running shows in mid October.)

The book is filled with great anecdotes that make it seem more like a fireside chat with someone’s grandpa. Hamilton is so old fashioned that he will not even allow his book to be sullied with profanity, and where quotes appear with swears, a hyphen replaces the letters that would spell out the offensive word.

Hamilton’s is a wrestling book first and foremost — there is little in the way of wild tales of the road and no bawdy kiss-and-tell stories. He adds flavour to his days in and out of the ring with a whole chapter dedicated to some of the characters he met along the way, as well as his takes on WCW’s demise and the missing elements in today’s wrestling stars.

Fans, aspiring wrestlers and even established ones should read this book for its wisdom about the wrestling industry. In fact, wrestling schools should be handing out the book to its students to drive home the point that wrestling is a never ending education. Even after 50 years in the business, Hamilton maintains he is still learning.