During his career, “Pistol” Pez Whatley broke more than a few boundaries. Whatley, who died Tuesday, January 18, 2005, at age 54, was the first black high school wrestling champion in Chattanooga and in Tennessee. He was then the first black wrestler at the University of Tennessee at Chattanooga.

As a pro wrestler, he brought smiles to many faces in and out of the ring when he was a good guy as “Pistol” Pez or Willie B. Hurt; as the heel Shaska Whatley, he drew happiness from the fans’ ire. 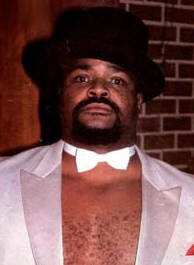 “I liked being a hero, making people like me, but I liked making people cheer against me too,” Whatley told the Chattanooga Times Free Press just before Christmas.

His friend of over 22 years, Rocky King, said that wrestling was the centre of Whatley’s existence. “He just loved wrestling,” explained King, who first met Whatley in Florida. “That’s all he’d talk about.”

As a heel, Shaska Whatley had an epic feud with “The Boogie Woogie Man” Jimmy Valiant in Jim Crockett’s World Championship Wrestling promotion in 1986.

Valiant ticked off his friend when he called Whatley the best “black” in wrestling; incensed at the racial implications, Whatley turned on Valiant, and cut part of his beard. He then took on “Number One” Paul Jones as a manager.

“If there’s anything I hate more than a black honkeytonk, it’s a white honkeytonk,” the newly-named Shaska Whatley once spouted on TV in regards to Valiant. The two feuded throughout the summer of ’86 at the Great American Bash shows, with Whatley eventually losing his hair in a match.

Valiant was saddened by the death of his old friend. “I have known Pez since the late ’60s in Tennesse,” Valiant said. “He was an old time trooper traveling by car on the road at least 100,000 miles a year for many decades. The Pistol was a true shooter and a great worker. I loved him and I’ll always keep a special place in my heart for that old Tennesse stud. We were born only 75 miles and a couple of years apart.”

The 5’10”, 245-pound Pezavan Whatley was raised in Chattanooga, Tennessee. After excelling in sports at Notre Dame High School and then the University of Tennessee at Chattanooga, he turned to pro wrestling, learning around Tennessee from the likes of Phil Golden, Saul Weingeroff, and promoters Nick Gulas and Angelo Poffo.

As a singles wrestler, his biggest success aside from the WCW run against Valiant, was in Florida, where he was NWA Southern Heavyweight champion, losing the title to Rick Rude.

He had a few notable tag teams. His initial success came with Ray Candy, holding the Mid-American titles in the IWA. In Poffo’s ICW, Whatley was a tag champ with Rip Rogers. After his heel turn in WCW, Whatley teamed with Tiger Conway Jr. in the Jive Tones.

“Pez always had a smile on his face. That’s what I’ll always remember most,” posted Dusty Wolfe on Oldschool-wrestling.com.

In the Continental Wrestling Federation in 1988, booker Eddie Gilbert took Whatley in another direction and re-named Willie B. Hurt. He feuded with Gilbert and his manager Paul E. Dangerously after Whatley’s real teenage son was involved in an angle.

During his career, Whatley worked across the U.S., Australia, the Caribbean, England, Germany, Hong Kong, Japan, Malaysia, Mexico and the Virgin Islands. He came to southern Ontario as a part of the NWA.

Whatley was also one of the trainers at WCW’s Power Plant. It was there that his health first turned. “I was in Denver and got bronchitis during production and training for the WCW,” he told the Chattanooga paper. “When we left there for Louisville, I felt like I needed to lay down … Every time I’d lay down, I’d feel like I was drowning. I’d turn my head and get a rush.”

He was treated for bronchitis, but the doctors also found that his high blood pressure was as a result of an enlarged heart that would eventually stop pumping. Whatley actually was pronounced dead on two occasions while awaiting a heart transplant during the subsequent years. He never had the transplant.

King was stunned by his friend’s recovery; after being hospitalized, Whatley would be out again to King’s wrestling shows and charity events. “It was incredible. I’d never seen anything like it in my life,” King said of Whatley’s recovery.

In his story in the Chattanooga Times Free Press, writer Ward Gossett described Whatley during his December 2004 visit. “Today ‘Pez’ is a shadow of his former physical self. Clothes that fit so well on a muscular 225-pound frame now sag on his shoulders. His belt is cinched tight, just short of needing a new notch. The personality remains vibrant, but the bounce in his step has been replaced with a shuffle.”

Yet Whatley was thankful for the extra time. “It’s a miracle I’m here,” he said. “I’m walking, talking proof there is a God.”

Whatley died Tuesday, January 18, 2005, at the Parkridge Medical Center in Chattanooga. The funeral will be Saturday at noon at Tucker Baptist Church, 1115 N. Moore Rd. in Chattanooga.