There might have been a hotter or more innovative promotion than southern California in the 1960 and 1970s. But you’d be hard-pressed to name it.

The Fred Blassie cage … Roman gladiator death matches … the fabled 22-man battle royal every January – those were just some of the things that made Los Angeles and the surrounding area such a hotbed of wrestling. 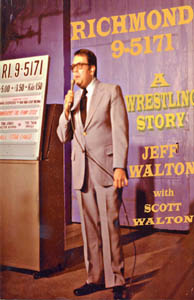 Jeff Walton was there to witness it all as a fan, publicist, promoter and announcer, and he’s laid out his recollections in Richmond 9-5171, A Wrestling Story.

Walton’s self-published volume runs 180 pages, and it’s a unique perspective because he filled so many roles during such a pivotal time for pro wrestling.

The meaning of the book’s title might elude today’s fans. But, in its time, the number was famous as the box office number at the Olympic Auditorium in Los Angeles, where nearly 10,000 fans screamed at the top of their lungs during Friday night fights.

In fact, study just about any picture of Los Angeles wrestling from that era and you’ll see the phone number sign as a backdrop.

Wrestling historians will appreciate a view from the inner council of perhaps the most memorable angle in history — the 1971 feud between Blassie and Chris & John Tolos. The ruse, in which Tolos heinously “blinded” Blassie by throwing a searing powder into his eyes, was so realistic that even Walton’s wife was nearly driven to tears.

“She was just heartsick about what had happened,” wrote Walton, who had to clue her in on the fact that she had just witnessed an angle, executed to perfection — and one that would be a high moment in his career.

One welcome chapter is devoted to women’s wrestling, which has largely gone unnoticed in the recent wave of books on wrestling. Walton is a decided fan of the women’s game, which came to California in 1965 only after a lengthy judicial proceeding.

Walton even ferried some of the women wrestlers to matches. He joked that his secret crush on Toni Rose caused him to overlook a bit of wine Rose and the Fabulous Moolah shared during one trip — in apparent violation of the state ban on open alcoholic containers in moving vehicles.From his days as heel manager Tux Newman, Walton includes behind-the-scenes yarns from the colorful Tennessee territory, where insults and wacky angles were the order of the day. And Walton, a happily married man, was surprised to find that Tux carried a certain amount of sex appeal to female fans.

While he has not been involved in wrestling for several years, the lessons Walton learned as a promoter and publicist are sage advice in light of today’s twisted and convoluted story lines. “If you make things too complicated, we found out our fans would be confused and we would lose a fair amount of them. So things had to be made simple.”

A near-lifetime in wrestling has left Walton under no illusions. At the outset of the book, he makes it clear that wrestling is “a tough, dirty and self-serving business.” And although he doesn’t dwell on negatives, stories about Sam Shepard and Andre the Giant remind readers that the wrestling world is not always a pleasant place.

Still, his tone is upbeat, and his style of categorizing road stories under themes, instead of chronologically, keeps the first-person narrative hopping.

Walton’s book is tamer than the recently published Chokehold by Jim Wilson or Ole Anderson’s Inside Out: How Corporate America Destroyed Professional Wrestling. Nor is Richmond 9-5171 as detailed as Mick Foley’s autobiography, though Walton has reprinted moving letters that Blassie sent him during the superstar’s convalescences in the 1960s. But it’s a solid memoir that looks at an important time in wrestling with a clear-eyed, yet loving, gaze.