MONTREAL – After surviving a major scandal in the last year, Ring of Honor (ROH) has not only fought to survive, but have risen to become the unquestionable top independent promotion in North America today. It seems no matter where an ROH show takes place, wrestling refugees fleeing the sports entertainment mainstream follow en masse.

At Marc the Grizzly’s Mid Summer Madness show last summer, the wrestling world in Quebec took notice of ROH’s presence, manifested in the form of Samoa Joe competing in a stellar match against Quebec phenom Kevin Steen. The buzz (and Kevin Steen’s bruises) following the match was the talk of the town for months.

This time around, on Saturday, January 22 in Montreal, grappler/promoter Marc the Grizzly has gone all out with his Near Year’s Madness card involving 38 wrestlers in 11 matches for what may become the best indy card of the year in the Canada. Apart from the contingent representing ROH, 35 of the best known Quebec-based wrestlers are anxious to measure their talent against their American counterparts.

You might think that Grizzly is looking into bigger and better things ahead, but it isn’t so. He only promotes two wrestling cards a year, typically one in the summer and one in the winter, and his main goal is to provide a great card to the Montreal fan and fantastic opposition to the wrestlers involved in his cards, many of which he has trained himself.

“I’m not looking to actually make any money, all I really want is the wrestlers to have fun, gain experience and some exposure, all the while giving the Quebec wrestling fans a good show” declares a humble Grizzly (real name Marc Pilon). 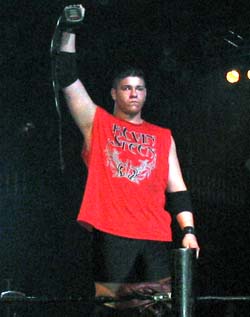 Although he has no intentions of any type of business association with ROH, he did say he has an excellent relationship with the U.S.-based promotion and will continue to pursue talent exchanges to benefit both Quebec wrestlers and the ROH roster.

“I discovered ROH two years ago and really like what I saw and wanted to bring their type of excitement to Quebec as I thought it might be just the type of entertainment they’re looking for,” said Grizzly.

The card will get under way with a fatal four-way match involving Crazy Crusher, the Elite Wrestling Revolution champion against Don Paysan, against Northern Championship Wrestling cruiserweight champion Alex Price against ROH’s own Jack Evans.

The next match, also a tag team affair, will have the Flying Hurricanes against TNT Action.

That will be followed by a four team scramble tag team match involving Los Latinos against Wonder Fred and his partner Viking against Player Uno who’s teaming up with Davey Jackson against hardcore expert Arsenal and his partner James Kraven.

Veteran wrestler Franky the Mobster will then take on ROH’s own Roderick Strong who has been making quite a name in the wrestling world with his excellence of execution.

In what many consider could be the technical match of the evening, Excess69 will take on John Walters, the current ROH Pure Wrestling Champion, in a non title match. Excess69 is often regarded as one of the best technical wrestler in Quebec, and even though he has loads of experience, his opponent will certainly show him what he’s capable of.

In a six-way mayhem match, veteran wrestler the Sexxx Express, Sexxxy Eddy will go up against Montreal Wresting Federation’s national champion Kid Kamikaze, against Beef Wellington against Hellstorm against Damian against Mr X-Treem. Beef Wellington did spend some time wrestling in the U.S. and has come back to teach his opponents a thing or two. But it is Sexxy Eddy, with his recent travels to the U.K and Germany, who’s promising to come out victorious.

In the semi-final of the evening, Samoa Joe, who recently lost his ROH title after holding it for 21 months, will once again face Kevin Steen, who would love nothing better than prove to Joe and the fans that his last match last summer at Mid Summer Madness against Joe was no fluke. They will wrestle in a triple threat against fan favourite El Generico. Both Generico and Steen have travelled extensively to the U.S. for many wrestling federations, most notably in New Jersey and California.

The main event of the evening will have former WWE tag team champion Pierre Carl Ouellet up against CM Punk. Ouellet has never stopped wrestling on the Indy scene since his departure from the WWE and the WCW and will be looking to re-establish himself as a force to be reckoned with.

The special attraction of the evening will be the presence of Austin Aries who will defend his newly acquired ROH title against the winner of the triple threat between Samoa Joe, Kevin Steen and El Generico. ROH has decided to send one of their top referees for this match, none other than Sean Hansen. This will be the first time any ROH title will be defended in Canada, and only the third time outside the U.S.

Kevin Steen sees it as an opportunity to thank Grizzly for his hours of training and mentoring to many Quebec based wrestlers.

“Marc is such an honest guy, I could have been wrestling in L.A. on the same weekend, but it was important for me to take part on his show for the exposure and the opportunity to wrestle Samoa Joe and also to let Marc know I appreciate everything he’s done for Quebec wrestling,” Steen said.

Sexxxy Eddy was trained by Marc Pilon and feels that participating on his show is only a small token of appreciation he can show. “Marc trained me and put in numerous hours teaching me all about wrestling, this is my way of thanking him.”

Marc the Grizzly was recently inducted into the Northern Championship Wrestling (NCW) hall of fame at a show before Christmas and is often regarded as one of the best wrestling instructors in Quebec.

But Grizzly has little time to relish this honour while putting together a mammoth card. Reports are that tickets are selling fast, with organizers aiming for a sell out.

The show gets under way at 7:30 pm and will be held at the NDR Center (Centre NCW) 955 Villerey East, Montrï¿½al. The doors will open at 7:00 and you can check out the website of the show at http://www.ncw.qc.ca/grizzly/show.html.

Corey David Lacroix and Yves Leroux will both be in Montreal for the show on Saturday, and hope to hook up with both SLAM! Wrestling readers, as well as the one and only “Bloodthirsty” Bob Kapur, who is trekking in from Windsor.