Big John Quinn, who died April 22, 2019, at age 78, from complications after an operation for a stroke, was always a little leery about getting into pro wrestling. He wanted to wrestle amateur and prove his skills. But workouts with Edouard Carpentier and Whipper Billy Watson proved to him that one could do both — be a pro with a solid amateur foundation.

A cousin to the late hockey player and coach Pat Quinn, John Quinn was born October 15, 1941, in Hamilton, Ontario, and grew into a 6-foot-4 man, in part from the farm life he was surrounded by. “I was the biggest and toughest kid in my class. When I went to the farm, I was nothing. Guys next door who could do 100 chin-ups, 100 push-ups,” he once explained. Both John and his cousin Pat tried out for football’s Hamilton Tiger-Cats, but their paths were destined elsewhere. 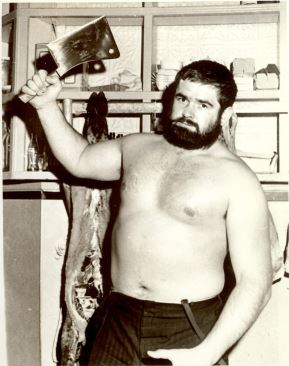 John Quinn as The Kentucky Butcher. Photo by Roger Baker

John Quinn took up amateur wrestling, and one day he saw a really big man in the gym go upstairs, and he followed. It was Al Spittles, a wrestler and trainer.

“He had a helluva career in Europe,” recalled Quinn. “The man was a legend. He was one of the best. He didn’t charge you hardly anything and he chose who he wanted to put into wrestling. I actually got in trouble with Al because I let a guy learn, and it turned out he never really was that good. Al Spittles had calibre. If you know the guys he trained, everyone of them was good.” 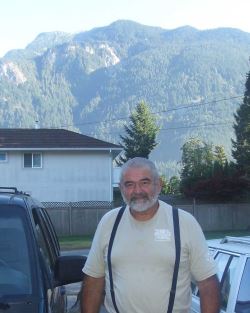 John Quinn outside his home, the Rocky Mountains behind him, in 2007. Photo by Shuhei Aoki

Quinn went to Montreal when he was 20, still wanting to learn more amateur, so he went to St. Jean de Baptiste, where he thought he could learn more. Instead, he got jerked around. “I got to this guy, and this guy was trying to break my goddamed arm. He was hurting me and he was supposed to be an amateur but he was actually just a wannabe pro,” he said.

Later, at a Montreal YMCA, Edouard Carpentier walked in, and Quinn asked him if he wanted to work out. “Well, he took it as a challenge,” said Quinn. “I hooked up with Carpentier. He must of realized right away that I had trained with pros, because I wasn’t like a big rock, I wasn’t stiff. He threw me all over the place. I don’t know how long I lasted, but I never saw daylight. I finally ended up upside down up in the corner. I was so dizzy I couldn’t even stand up.”

Carpentier could see something there. “As soon as everybody left, Carpentier came over, untied me, pulled me up, and said, ‘You’ve worked with pros, haven’t you?'” Quinn mentioned names like Billy Red Lyons and the Tolos brothers. Carpentier encouraged him to continue.

Quinn’s first matches were up in northern Ontario for Larry Kasaboski, and then hooked up with Whipper Watson. He was a headliner out in Vancouver and Calgary for years. 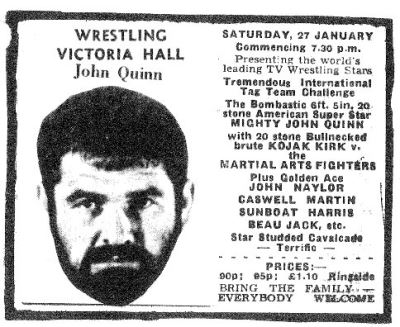 His wrestling odyssey took him to Europe for 14 years, where he was one of the biggest stars ever in England, along with Japan, Austria and Germany.

The news of his death was reported by the All Star Wrestling UK Facebook page. “This comes just a day after the anniversary of his World Heavyweight Title win in 1980 against Wayne Bridges at Brent Town Hall, Wembley,” noted the site. “He headlined British Wrestling’s biggest ever show of the time against Big Daddy at Wembley Arena.” 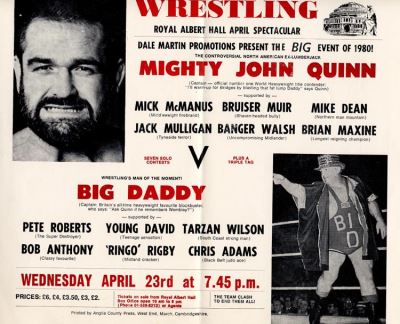 “I loved it. Made good money. I was making $100,000 a year without tax,” Quinn said in The Pro Wrestling Hall of Fame: The Canadians.

A falling out with a promoter signaled the end of his European vacation in 1987, and the end of his wrestling career. He didn’t have any interest in changing his style to fit with the late-’80s gimmick-style of the WWF.

“John is his own worst enemy, shot himself in the foot all the time,” once said Dutch Savage. 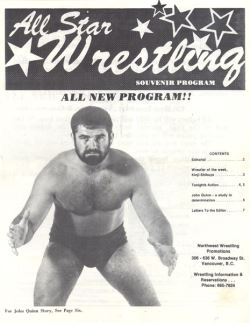 A Vancouver program from 1976.

In the Ring Around the Northwest newsletter’s Hall of Fame issue, 2007, writer Mike Rodgers summed up Quinn’s career in the Pacific Northwest: “When you think of the boom period of Vancouver wrestling in the early 70s, you think of Kiniski, Jonathan, Bulldog Brown, Dutch Savage and Big John Quinn. Quinn had some big runs as The Kentucky Butcher, but he should have been even bigger around the country.”

Besides being Big John Quinn, he was also the Kentucky Butcher in Detroit for The Sheik in 1970, managed by Big Bad John, and was imported into the WWWF under that name. “I wasn’t really a smooth worker. They liked the guys that didn’t hit you in New York, even then. And Bruno and I had some problems,” Quinn said.

In Texas, he worked as The Stomper and then later as The Masked Spoiler. In Georgia, he teamed with Grizzled Smith as a The Kentuckians, a relaunch of Smith’s previous team.

Around 1969, Quinn had an opportunity to become an American citizen while in Texas, but it would have meant that he would have been drafted, and with the Vietnam War under way, he chose to return home, initially to Hamilton, and then he settled for good in and around Vancouver, B.C. The first marriage didn’t work out. “I fell in love with this girl, the first girl, and bought a house in Crescent Beach (White Rock area in Vancouver),” he lamented. That home, which he paid $16,500 for, and lost in the divorced, ended up being worth more than a million. He is survived by his wife, Linda. 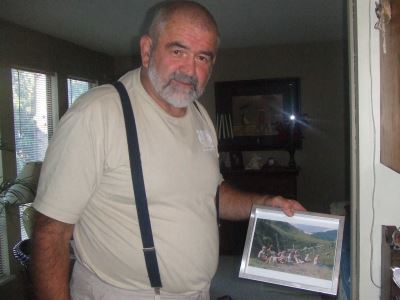 John Quinn shows off a photo, in 2007. Photo by Shuhei Aoki

Quinn drove a truck for a time, and a cab, until a myriad of health issues made life infinitely more complicated.

He had back problems for years, was hit by a bike and hurt his knee, had a car accident, and from August 2010 to April 2011, he was confined to hospital in B.C. with cellulites in his leg and they cut away a huge chunk of his calf and some of the bottom of his foot. When it didn’t heal, doctors did some vascular surgery because scans showed his legs from the knees down were all calcified. Then he picked up two superbugs while at the hospital and lost 100 pounds, bringing him down to about 207 pounds. Later, he had a big toe removed. to 207), came home in December, but then went back where they had to take off his big toe.

Further details on his death on April 22 are not known at this time, nor are funeral arrangements.