In celebration of John Quinn

For 200 fans inside Twister’s Gym at the Abbotsford Agri-fair, the heat was not even a factor this past Saturday. They had gathered to watch one of the three shows being put on by Top Ranked Wrestling (TRW). The fans for the 2:00 p.m. show, however, were treated to something extra special: TRW’s special tribute to “Mighty” John Quinn. 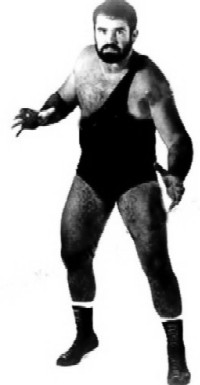 Mighty John Quinn in his heyday

While the rest of the fair’s patrons sweltered in the heat outside, TRW’s The Count briskly strode in to the ring to announce the tribute. “Ladies and gentlemen,” he said loudly into the microphone, the excitement evident his voice, “this is bigger than me, bigger than all of us. Tonight, TRW is honouring a legend in this business.”

Then, as if to prove the validity of that statement, he listed off some of Quinn’s accomplishments. “This man has wrestled the likes of Bruno Sammartino, Jimmy Snuka, Gorilla Monsoon, Hulk Hogan and Andre the Giant. He has wrestled local legends like Dutch Savage, Moose Morowski, Don Leo Jonathan and Gene Kiniski. He has wrestled in England, Germany, Ireland, Austria, the United States and, of course, all over Canada.” With that, his voice raised to a crescendo, he introduced the great man: “Please welcome the legend, the ‘Mighty’ John Quinn.”

The big man rose from the crowd — an older form of the wrestler that had battled in arenas worldwide — and he was still a sight to see. Though he walked a little more gingerly than he had in the past, his eyes sparkled with knowledge and complete understanding of what was taking place. The fans, many of whom had likely never even heard of this man before, rose to their feet in applause. Somehow, on this muggy day in the middle of summer, they collectively found the energy to show a wrestling legend the proper respect. 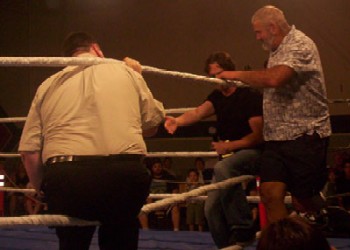 Quinn (right) makes his way into the ring as The Count and TRW Commissioner Mike Democrat hold the ropes. – photos by Fred Johns

The 63-year-old Quinn stepped through the ropes carefully and stood between The Count and TRW Commissioner Mike Democrat, who took the microphone. “For your lifetime dedication to the art of pro wrestling,” he said to Quinn, “we at TRW are proud to present you this plaque. John Quinn, we thank you.”

Democrat then handed Quinn a small black and red plague, which Quinn took appreciatively. When the applause from the crowd died down a bit, he took the microphone himself and made a short statement of his own.

“I am not sure if I am a relic or what,” he said to the laughter of the audience. “It’s been a long time since I stood on one of these,” he continued, lightly bouncing on the ring’s canvas. “Twenty years ago, Vince McMahon Jr. created wrestling on television. At that time, I left Canada and spent 15 years in Europe. I never watched Vince’s wrestling, nor will I ever. These people here,” he said, motioning to Democrat and The Count, “have started Canadian wrestling.” His words, cryptically stated, were understood: …which is infinitely better.

“How the world has changed,” he went on. “We used to watch the Hamilton Tiger-Cats, the Montreal football clubs, the Vancouver football clubs. Yet, here I am wearing shoes made in China.” The crowd laughed, the wisdom of a well-traveled wrestling legend resounding with them.

“I don’t remember Abbotsford being a great wrestling town,” he said in a quieter voice. “But it sure looks like one today. It looks like there is a future here.” He said something else, but the applause of the fans — and those who comprise TRW’s talented roster — drowned him out. He handed the microphone back to The Count and, with a slight bow of his head, waved to the crowd.

After that, The Count announced Quinn would be remaining for a few moments after the show to sign autographs and instantly, a line of anticipative humanity was formed. Those that stood in this line crossed all boundaries. Small children and young adults who had never even heard of Quinn before and had certainly never seen him wrestle waited patiently next to the older fans whose memories of Quinn, while fading, had somehow endured. 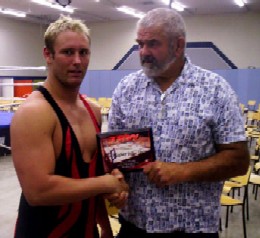 One of them, an Agri-fair employee named Doug, was one of the latter group. “This sure brings back memories,” he said while waiting in line. “John Quinn’s first match was in 1961 and the first match I went to see was in 1964. It was a real pleasure to see him here today. Last year, I was here to see Bret Hart, and this year it was John Quinn, which is interesting because in his day, Quinn was #1 and in Bret’s time, he was #1 as well, so I can’t complain.”

Quinn is originally a Hamilton native, and is a cousin of Toronto Maple Leafs coach Pat Quinn. He broke into wrestling in Steel City under the tutelage of Al Spittles, and made his debut in northern Ontario for Larry Kasaboski in 1961. Hooking up with Whipper Billy Watson, he started working around southern Ontario in the Masked Yankees with Wes Hutchins (“great guy, a lot of balls”).

Quinn told SLAM! Wrestling’s Greg Oliver in 2002 that he has no regrets over his career. “I was a wrestler. I was happy. I was proud to say I could wrestle.”

During his North American career, he worked under countless names: Marcel LeMay; Jack Clay; Danny Dubois; The Kentucky Butcher (1970 for The Sheik in Detroit); The Butcher (WWWF — “I wasn’t really a smooth worker. They liked the guys that didn’t hit you in New York, even then. And Bruno and I had some problems.”); The Stomper, then The Masked Spoiler (Texas); Georgia as a part of The Kentuckians with Grizzly Smith (“Jake [Roberts, Grizzly’s son] was a little kid about nine years old running around the swamp shooting snakes. He hated snakes.”).

In 1970, he went west to Vancouver, where All-Star Wrestling promoter Gene Kiniski decided that John Quinn was a decent enough name for a 6-foot-4 wrestler.

Quinn’s best years were 1978 to 1987 in Europe. His passport got filled up quickly, with stops in Hanover and Bremmen, Germany, Calgary, South Africa, Vienna, Austria and countless other German and English tours. “Every January, I’d wind up back in England, and every December, I’d end up in Bremmen,” Quinn said.

“John was the biggest star that ever hit England,” said Moose Morowski. “There was nobody bigger. He’s a legend in England. When I went to wrestle in Europe, in Germany, John was there and he was in the same tournament. He was always recognized as being in the top five in Europe.” Morowski also called Quinn a workout fanatic. “It was nothing for him to do 500 squats and 500 push-ups before the match.”

After a fallout with a promoter, and the English wrestling scene in decline, he returned to his new home of British Columbia. Quinn tried to get back into it, but couldn’t deal with Vancouver promoter Al Tomko. “Tomko was very much like Otto Wanz. A wannabe. He thought he could wrestle. He didn’t have a clue. He couldn’t wrestle, couldn’t book, didn’t have a clue. He took a territory, we were always sold out within 20 seats in Vancouver every Monday night. When Tomko took over, going over the gate receipts, they went down every week,” Quinn said. “I went to Tomko and said to him, ‘Tomko, you’ve given me a cheque for $360. I spent that on the road.’ He said, ‘John, do you have a trade?’ I said, ‘Yeah, wrestler.’ He said, ‘No, do you have another trade.’ I said, ‘No.’ ‘Well, labourers get $5 an hour.’ I thought, ‘You *&*(! moron.'”

For the last few years, Quinn has indeed been a labourer, driving a one-ton van. 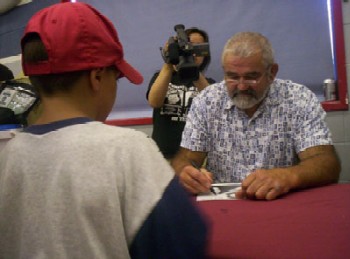 TRW wrestler Layne Fontaine, who helps organize and promote TRW, watched the line as they filed through, getting autographs from Quinn. “It was nice to have him here and for TRW to be able to honour him,” he said. “Every sport has to recognize its past and its roots and what got them where they are today. And that man there,” he said, nodding in Quinn’s direction, “sold out more arenas than any of us ever will, gone more places and accomplished way more.”

Fontaine said Quinn is only the first of several tributes TRW is planning. Future honouraries include Don Leo Jonathan, Moose Morowski and Gene Kiniski. “To show how humble he is,” Layne continued, “John almost didn’t do this because he wanted Don Leo and others to at least get honoured first. That just shows how he still knows and understands the pecking order of the old days. He didn’t feel right going first but we let them know the others are still coming up and it’s just that they’d rather do the tributes in Cloverdale as that is closer for them.”

The first of those tributes is tentatively scheduled for September, but Fontaine and the rest of the TRW locker room were only interested in the day they were currently living, and in the man now signing autographs whom they had come to respect. “Quinn wrestled the biggest names in every country and promotion,” Fontaine said. “I never had a chance to watch him wrestle because he retired before I started watching wrestling, but I’ve definitely done my homework on him.”

As the autograph session ended, Quinn posed for some pictures before being whisked away to the VIP room where the other guys could meet him over a prepared lunch. Quinn himself was in no hurry, and seemingly wanted to talk to everybody and impart his years of wisdom and knowledge to those who were willing to listen. It almost seemed as if he didn’t really want to leave his proximity to the ring which stood empty in the middle of the room.

“I think it was awesome for him to get in the ring again after all these years and get the feeling of stepping through those ropes one more time,” Fontaine said as Quinn began to make his way out of the building. “I think this was good for him and it was sure good for us.”

The shadow of Quinn was all that was left of him as he made his way into the sweltering heat to his next destination. But his physical presence was no longer the most significant thing. For the true magic of what “Mighty” John Quinn had accomplished that muggy and hot day in Abbotsford would be measured best by what he had left behind.