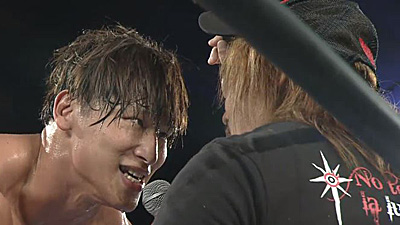 Ibushi received a surprise though as former champion Tetsuya Naito, the leader of Los Ingobernables de Japon, came down to the ring when the match was over.

“I would like to be the next challenger for the IWGP Intercontinental Championship but there is a wrestler who wants this belt and he is going to come to the ring,” said Naito. There was a long pause then Naito said that unfortunately nobody was coming.

“Would you like me to be your next challenger?” asked Natio requesting an answer.

Ibushi agreed but not before telling Natio to shut up with his nonsense theatrics.

Juice Robinson paid the price somewhat for boasting that he was going to slam Bad Luck Fale during their IWGP United States Championship match.

Bad Luck Fale wasted no time. Once Robinson stepped off the ropes after greeting the fans, Fale hit him with a clothesline. Fale stomped on Juice as he was trying to get his entrance gear off.

Robinson attempted to slam Fale. Fale slammed him to the mat instead and a clothesline had Robinson seeing stars on the floor.

Robinson dodged a charging Fale throwing him into the ringside barrier. Robinson went for the slam but it was Fale who picked Robinson up, slammed his back into a steel post twice and then slammed him on the concrete arena floor.

As he opened the ringside barrier’s gate, Fale waved the fans away. Fale pitched Robinson into the first five rows of chairs. Fale scooped up Robinson slamming onto a row of chairs. Robinson made it back in the ring at 18.

Fale put his knee into Robinson’s back as he pulled him backwards by the jaw and hair. Fale was forced to break the hold by Red Shoes.

“How else am I supposed to win?” yelled Fale at the official.

A bear hug had Robinson screaming in agony. Elbows and slaps freed Robinson. Robinson went for another slam but doubled over holding his back.

Repeated forearm smashes made Robinson collapse in a corner. Fale whipped Robinson off the ropes backdropping him almost through the roof of the Aichi Prefectural Gymnasium.

Fale bounced Robinson off the ropes only to hit him over and over with a forearm to the spine.

Robinson countered a whip with a punch knocking the giant back a step or two. Fale easily shook off a Pulp Friction attempt by Juice. Robinson beat on Fale in a corner. Unwisely, considering his injured back, Robinson uncorked a cannonball on Fale.

Robinson hoisted Fale off his feet but couldn’t slam him. A splash got Fale a two count.

Robinson kicked out of a spear and a Grenade by Fale. Fale was about to pull Robinson up for the Bad Luck Fall, however, Robinson just collapsed to the canvass bringing Red Shoes over to check on him. Robinson squirmed out of another Bad Luck Fall and a Samoan Drop. A Left Hand of God stunned Fale. A splash from the top rope and another Left Hand of God set up Fale for a slam. Robinson picked Fale up and slammed him down as the crowd cheered.

Dragon Lee, Toru Yano and Togi Makabe beat Bullet Club (Taiji Ishimori, Tanga Loa and Tama Tonga). Yano rolled up Loa after Makabe clotheslined both Loa and Tonga. Yano took the tag belts and held them up. Loa and Tonga clobbered him from behind. The Guerrillas of Destiny hit Yano with the belts.

‘Mad’ Mikey Nicholls beat Chase Owens with the Mikey Bomb. As Nicholls came down the entrance way, Jado belted him with his kendo stick. The official banished Jado to the locker room.