It has been said that over 25 years ago, a mystical creature known as the Purple Haze emerged from the darkness and arose from the deep, cold waters of Waikiki. “From the black side,” Kevin Sullivan once said during an interview on Championship Wrestling from Florida, is where the Purple Haze hailed from. 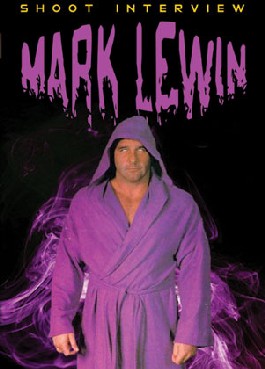 In the introduction, Steve Johnson tells viewers that Lewin is a 2009 inductee into the Pro Wrestling Hall of Fame in upstate New York, having won championships on four different continents with an impressive career spanning nearly the entire second half of the 20th century. After the intro, Johnson establishes the fact that he and Lewin are speaking openly about his career, “And when your career started in 1953, (a shoot interview like this) was strictly taboo.” He asks Lewin, “Has wrestling lost something since then?”

“The mystique,” replies Lewin. “I don’t say it’s a bad thing. It’s a good thing in a way.” Now in his 70s, Lewin looks amazing for his age, sporting a devil-like short beard and shaved head. With an almost surreal calmness and aura about him, in the opening minutes of the shoot, he is captivating to listen to as he speaks about his origins, growing up in post-war Buffalo. As one of three wrestling brothers, Lewin shares personal stories about breaking into the business, as his older brother, Donn Lewin, was wrestling for promoter Ed Don George, and his sister married pro wrestler, Danny McShane. “It wasn’t easy getting into the business back then,” said Lewin, as he shared insight on being trained by George and McShane.

The back of the DVD case states, “Lewin’s memory of this time in the wrestling business during the 1950s and ’60s is remarkable.” It is, indeed, as Lewin tells stories of going to the Buffalo Memorial Auditorium to see matches like Danny McShane versus The Great Togo. “I just fell in love with Danny McShane,” says Lewin. It was McShane who took Lewin to California to get a wrestling license at the age of 16, despite being underage.

“Magneticism,” is what Lewin said McShane possessed. Johnson concurred, “You couldn’t take your eyes off of him.” From here, Lewin shares some fascinating tales of the violent and bloody feud Danny McShane had with “Wild” Red Berry, selling out arenas across the state of California. It’s a nice segue to Lewin’s early years breaking into the territories and establishing his career, wrestling everyone from Danny McShane, Buddy Rogers, and Antonio Rocca to King Curtis, Bobo Brazil, and Dr. Jerry Graham. “I used to go to territories that didn’t have TV,” says Lewin. “Barnstormed them, by word of mouth, gaining a reputation. It was a different carnie-type (era in wrestling). A lot of wrestlers weren’t easy to get along with, they wanted to stretch me and make sure I paid my dues. It wasn’t easy.”

“Things change in the wrestling business though,” says Lewin, while speaking about his years as working a babyface. “Vince McMahon (Sr.) used to call me, ‘The best baby(face) he ever had.'” As for the villains, Lewin speaks at length about his admiration for Buddy Rogers, as Johnson chimes in: “He was as dominant a figure as there was at that time. Not only one of the greatest heels of all time, but one of the greatest workers of all time.”

Lewin listens intently to Johnson, takes a moment to reflect, then thoughtfully responds, “He had that natural ability. He was a very cunning person. I spent a lot of time around Buddy. He had a great way of talking.” Lewin then leans into the camera and delivers a great impersonation of Rogers to illustrate his point. Making comparison to Frank Sinatra, Lewin says Rogers was, “Very, very intelligent. I learned good things from him and Danny McShane, and some bad things too.”

Johnson then sets up a great discussion about the fundamentals of wrestling, and what aspiring wrestlers today still need to know. “Danny (McShane) could deliver a punch that looked like it could take your head off, but you would never feel it — light as a feather,” says Lewin. He credits McShane for teaching him how to throw a convincing punch. “A punch has to look like a punch.”

“Most wrestlers have (only) one way of falling down, and one way of getting up,” he adds. “This is not necessarily a good thing — their routine. If you watch my matches, you’ll never see me get up the same way, talk the same way. You have to be creative.

Coming back to the topic of wrestling fundamentals, Lewin sheds light on what he would tell young wrestlers today. “(I would) tell them to try to be more creative,” said Lewin. “Bring the male image and personality into it — beyond the high flying (action). We did business week after week in the same place, and people came to see the matches because they were interesting, and the (wrestlers) they got to know.”

Johnson ask Lewin, “How did you learn to develop taking a fierce some beating or (in wrestling lingo) ‘selling it.'” Lewin takes time to respond and speaks at length about Dusty Rhodes and his ability to “sell.” Another interesting name he brings up is Angelo Mosca Jr., as Highspots nicely puts up an image of Mosca Jr. while Lewin is speaking. Lewin then shares some insight on selling a beating: “Always think about a dog choking on a bone, and try to get that feeling of writhing and withering (in pain). There’s got to be a feeling to it. I remember one time Buddy Rogers said to me, ‘My God, you’re going to get me killed (by the fans).’ I sold it so well.

“I ‘made’ guys who I liked, like Karl Kox. I wanted to see them on top. A lot of people owed me a lot of favours.”

Johnson ushers Lewin into a discussion about “his first real good long run in New York,” and says that he and Don Curtis were the greatest tag team to come out of Buffalo. “How did that come about?” asks Johnson. Here, Lewin beautifully weaves in the complicated relationships, both professional and personal, of names like Danny McShane, Bobby Davis, Dr. Jerry Graham, and Vince McMahon Sr. when putting this era into context, and the years he tag teamed with Don Curtis in major territories like Chicago and New York.

When Johnson asks Lewin about the longevity of the Lewin/Curtis tag team, and “keeping it fresh,” over the years, Lewin meanders for the first time in the interview as he shares a difficult-to-follow story about bringing brownies to the ring announcer, while being “faithful to Don and taking care of him.”

From here, Lewin is asked about his time working for Vince McMahon Sr.’s Capital Wrestling promotion, Madison Square Garden, and the wrestling scene of the late-’50s, with names like Antonio Rocca. In another interesting segment, Johnson asks him to share some insight on how the sleeper hold became his finishing hold, as Lewin speaks at length about the effectiveness of the maneuver. While discussing this fairly early stage of his career, it becomes evident that Lewin has traveled extensively throughout the North American wrestling scene as he shares a funny story about going to Calgary and spending time with Stu Hart.

Steve Johnson then acknowledges 1963 as a pivotal year for Lewin as he shed his clean cut babyface image to become the villainous “Maniac” Mark Lewin. It was during “a scientific match” in Houston, wrestling for Paul Boesch, when Lewin decided to uncharacteristically deliver a low blow to his opponent as “The people were jumping over the ropes, and it was bedlam,” Lewin remembers fondly.

“There’s a little heel in all of us,” Johnson says to Lewin. “It came very naturally to me,” Lewin relies. “I lived every personality. I lived as the Purple Haze for many years before I became the Purple Haze.” When discussing memorable heels of the ’70s, Lewin speaks at length about “The Great Mephisto” Frankie Cain, and some parallels to the Purple Haze character.

From Australia, to New Zealand, to wrestling in front of 48,000 fans in Korea, Lewin has clearly seen it all, as Johnson asks him about memorable bouts against Killer Kowalski, Dominic Denucci and Kintaro Oki.

But it’s during the segment, where Johnson asks him about his memorable feud with The Sheik, that Lewin sits on the edge of his seat and gets eerily quiet and articulate. “He was high violence, and he could throw fire like nobody else — he could envelope you in violence.”

Johnson asks Lewin how he kept the matches interesting and fresh, having wrestled The Sheik over 200 times. Here, Lewin shares insight on what made The Sheik such an attraction, and his believability. “That selling thing that you asked me about — he had a lot of guts on going the limit with violence,” said Lewin. “I went over an hour with him in Cobo Hall — I finally beat The Sheik. (Fans) were at the point where they wanted to see The Sheik beaten. It was like Lou Thesz, when I put him to sleep in the Olympic Auditorium in Los Angeles — looking down at him lying on his back, I remember thinking that Mark Lewin has finally arrived, because Lou Thesz rarely ever lost.”

Never a dull moment, and 90 minutes into the shoot, Johnson keeps the interview moving along nicely as they discuss the evolution of Mark Lewin, from the clean-cut babyface of the 1950s to the nefarious Purple Haze persona of the early ’80s. Bridging the past with the present, Johnson acknowledges that Lewin’s career “spans from Gorgeous George to Kevin Sullivan and from Buddy Rogers to Bruiser Brody.” Johnson asks Lewin if he changed over time to accommodate the various styles of his opponents over the years. Lewin is reflective in his response, “I upgraded the violence in the wrestling business — I’m guilty of that.” Here, Lewin shares some insight on how he changed his physique over the years and refers to himself as “a chameleon,” wrestling from Singapore to Hawaii.

“From the waves of Waikiki,” Johnson recalls, is where the persona of the Purple Haze made his debut on an episode of Championship Wrestling from Florida. “It wasn’t hard for me to fall into the character because I am the Purple Haze,” says Lewin, who credits Dusty Rhodes as the creative mind behind the evil devil-worshiping character. “It came easy, because let’s face it, I’m out there. I’m from the Timothy Leary era — I like living on the wild side. JJ Dillon and Kevin Sullivan had a part in that as well, and it got great reviews, (me) walking up onto the beach from Waikiki.”

In closing, Johnson says anyone who can make Abdullah the Butcher a babyface is a major task, referring to a memorable feud that Lewin had with Abdullah. “Yes, because I’m believable,” says Lewin, intensely looking into the camera. “I am the maniac, I am the guy who delivers brownies, and I am the Purple Haze.”