In a year that saw more change than we’ve seen for quite a while in wrestling, the top story of the year was sadly not an uncommon theme — a wrestler passing away.

In the past, tragic stories like the deaths of Owen Hart, Eddie Guerrero and Chris Benoit dominated headlines so dominantly that at times it was hard for us as pro wrestling journalists to open our email inboxes, almost knowing going in that we were going to be hearing that another hero of ours had fallen.

2009 was not immune to this. When SLAM! Wrestling began discussing the top stories of the year a few weeks back, the passings of Eddie Fatu and Andrew Martin were prevalent on our lists, and had those conversations only started yesterday, inevitably “Dr. Death” Steve Williams would have been on our lists as well.

When SLAM! Wrestling’s Greg Oliver and Jon Waldman narrowed down our respective lists though, there was one story that we both felt were of more importance than any other – including Shane McMahon leaving WWE, Hulk Hogan being TNA bound and other such stories – the death of Mitsuharu Misawa.

Misawa was wrestling in a tag team match alongside Go Shiozaki against Akitoshi Saito and Bison Smith in a match for Pro Wrestling NOAH. Saito gave the NOAH owner a back suplex that injured him and ultimately resulted in his death.

The passing of Misawa, one of the all-time greats in Japanese wrestling and the industry as a whole was a shocker to his fans. Chris Hero, best known for his work in Ring of Honor, said that day in his MySpace blog that, “the moments at ringside felt an eternity. Never, in my life, have I wanted the fighting spirit to jump into someone’s being more than I wanted tonight.” 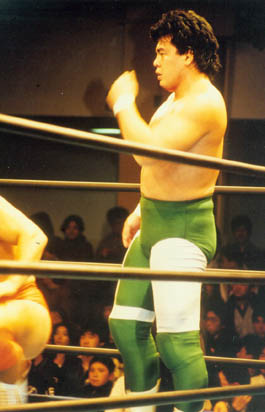 Mitsuharu Misawa ready for action in the All Japan ring in 1991. Photo by Mike Lano, [email protected]

Tributes would pour in across the world for the 46-year-old legend, and no one will forget the man who once wrestled as Tiger Mask. His matches are still available for regular viewing on YouTube and with legions of fans behind him, the memory of Misawa will live on forever.

Other newsmakers in 2009
As alluded to earlier, there were other deaths that were unfortunate stories to be told in 2009, including the passings of Martin and Fatu, but there were other headlines that have started to build intrigue as we head into 2010.

Predominant here were the stories of Shane McMahon and Hulk Hogan. Shane-o-Mac publicly announced his departure from WWE, officially effective today. Word of his leaving the company had very different stories attached to them. Some speculated that he would be heading to UFC (which was further strengthened when news broke that he had a meeting with Dana White), others said that he was TNA-bound and others stated he would be leaving the spotlight of fight sports and entertainment altogether. At this time, his future remains under a shroud of mystery.

Hogan’s return to the wrestling spotlight was also a newsmaker in ’09, as he announced that he would be involved in TNA. Since the Hogan press conference first aired, TNA has reportedly gone on a mission to hire a number of WWE ex-pats in preparation for the kickoff of the Hogan era, set for Monday, January 4. Yes, for the first time in nearly a decade, we will have competing shows (at least for one night) on Monday nights. The Hogan effect could very well be the story of the year for 2010, but only time will tell.

Also making headlines this past year were Jeff Hardy for what was one of the most up-and-down years any performer has had in the history of the business, Vince McMahon’s latest twist on wrestling – guest hosts for Raw, Nigel McGuiness and Brian Danielson’s departures from Ring of Honor to TNA and WWE respectively, Sheamus winning the WWE title and others.

* note: Lists were compiled in mid-December.