Essentially, Lutte 2000 shows have been mostly a showcase for Rougeau’s wrestling school students. Some of them have been at the school for five years and most of them have been there at least three years. They are learning well as the quality of the show increases every year. This year had two shows at the Verdun Auditorium on the 26th and 27th of December, a first for Rougeau.

In a press conference back during last fall, Jacques Rougeau had warned fans that the two shows would be identical and not expect different shows. For the first show on Boxing Day, weather conditions in Montreal were awful, almost shades of the Ice Storm as almost seven millimetres of freezing rain fell on the city, and even if Rougeau was skeptical anyone would brave the conditions to attend the show; 1,500 showed up, a remarkable number. The second show was a Sunday afternoon affair, and attendance rose to close to 3,000. One can only guess how many both shows would have attracted under favorable weather conditions. The Lutte 2000 Christmas shows draw the biggest crowds of any independent wrestling federations in Canada.

Before the cards, Le Journal de Montreal, a French daily newspaper, had a contest in which winners would win VIP tickets for the shows, or free passes to see Sherlock Holmes and the first prize was a dinner with Jacques Rougeau and Kurrgan, who portrays Dreger in the movie. The contest had many thousands of entries and Kurrgan made a splash between over a dozen interviews in the general media.

Sherlock Holmes, which made $24.8 million on its Christmas Day release and over $143 million worldwide in its first week of release, had Kurrgan tell SLAM Wrestling: “Can you spell sequel?” with a giant smile. Although he is well aware that movie career can come to a very quick stop, he’s taking his success in stride and one day at a time. But he is enjoying the moment, as was obvious after the wrestling show where he spent well over 30 minutes signing autographs and pictures with fans. Although the friendship between Jacques Rougeau and Kurrgan has been a lengthy one, the fact that it was Rougeau that suggested Kurrgan to the movie producers when approached by them has only cemented their friendship.

The shows had the quality that has come to be expected, great lighting, an MC worthy of the best, but this year, somehow, Rougeau was able to start the shows without the interminable list of sponsors before the first match. Television crews were filming the event for future use, to be determined at this time. Before the first match, a special presentation was made — something which has become a regular occurrence for Lutte 2000, a cheque of $5,000 was presented to The J.J. Mercier Foundation, which provides funding for the CLSC’s in Quebec. World renowned opera singer André Ouellette then sang Minuit Chretien to open up the show.

The opening match had Jacques’ son Emile Rougeau — a fourth-generation wrestler — win. Next was crowd favourite Bad Dog pinning Tapoche the Clown. In a Last Man Standing match, T-Bone won against Ballistik, Johnny Boy and Du Rag James. The Lutte 2000 school championship belt was on the line for the next match, pitting J.J. Rougeau against Taloche the Clown. The clown had his much smaller shadow, Taloche, at ringside with him, which made J.J. ask for help and that’s when former WWF star Tiger Jackson came out to the delight of the crowd. Rougeau retained the belt with the win. In a triple threat match Frank the Machine won against Silver and the Predator.

The grand finale had Kurrgan, with partner Eric “Pretty Boy” Mastrocola, against Jacques Rougeau and his new protégé, a 7-foot-4, 500-pound wall called Giant Martin. The newcomer made his first appearance last year at the previous Christmas show to stop Kurrgan from beating up everyone breathing in and around the ring. After months of training, and a long period when Kurrgan would make sure to not be in the ring when Giant Martin was, the fan favourites took the match to the delight of the fans. 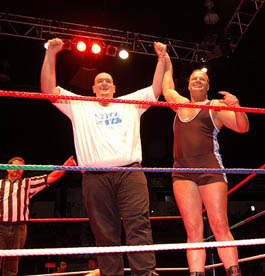 After the show, all the wrestlers met the fans for an autograph/picture session, which is always very appreciated. Jacques Rougeau truly believes to give back as much to the fans as he can, and this is one way to do it with class.

Already over 10 dates have been confirmed throughout the province for Lutte 2000 in 2010 with many more being negotiated. These shows, if based on past history, can attract over 1,000 fans per show, a true achievement considering most of the independent wrestling federations in North America usually draw a few hundreds at best. Jacques Rougeau is showing no signs of slowing down, his belief that wrestling will never die and only thrive.