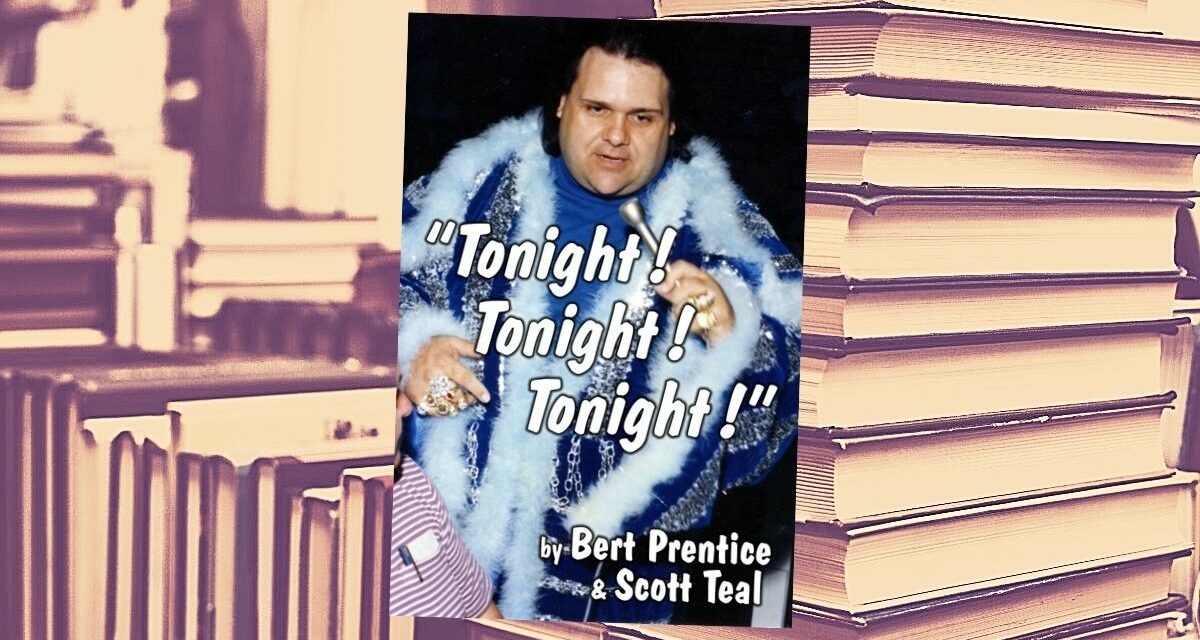 In the grand scheme of things, there are not many books written by professional wrestling promoters. There are a few that come to mind:

When I sat down to read the books listed above, at no point do I remember going, “This should be required reading for any promoter.”

Prentice lived and breathed wrestling, and there are lessons to be learned throughout the book.

Tonight! Tonight! Tonight! is done in a question and answer format, where the esteemed Scott Teal asks Prentice about his life in and out of wrestling, and Teal truly does a marvelous job keeping Prentice on track, talking about a specific subject. It’s evident that Teal not only did his legwork getting ready, but that he was prepared for whatever Prentice might throw at him.

That might be growing up around wrestlers as his mother worked weekends as a ticket-taker at AWA shows, performing as manager Christopher Love, doing standup comedy, promoting Ozark Mountain Wrestling, or USA Championship Wrestling, or so many other places, or the people he interacted with along the way, including names we all know, like Jerry Jarrett, Jerry Lawler (who wrote the foreword), Joe Blanchard, and those we don’t, the actual nuts and bolts people who make promotions work — the money people, the ticket takers, the people who set up the ring, the merchandise sellers. Unheralded names, like long-time Atlanta-based promoter Bill Behrens, are truly celebrated by Prentice, to the point that I want Teal to do a similar project with Behrens! Prentice was connected to some country music icons, and even Tammy Faye Bakker too.

For all the strengths of the Q&A as a concept for a 300+ page book, it’s also a frustration at times, as you know so much could be condensed, and there were times I glossed over the text as the tale tended to wander. But then Prentice will drop a line like, “This is the craziest story, but it’s true,” and you pay even greater attention. It’s not a book you pick up for the photos, though. Most of the ones of Prentice are with friends, and there are some unique newspaper ads and clippings to support the text.

Promoting-wise, there are so many takeaways: trusting the right people; finances; making posters that stand out and then postering towns; advertising; working the door; making the right contacts in a town, from politicians to civil servants, to the local media; finding the right venue and things to do to make it better for both wrestling and television; keeping fans happy; what to sell at the gimmick table; wrestler headaches and solutions; even the reason why Prentice rarely stayed to the end of one of his own wrestling shows.

There’s a lot of lamenting too, and not just because, as you get closer to the end of the book that you know Prentice died on August 4, 2021, after battling cancer for years, and he never got to see his book in print; Teal’s introduction is moving, insightful and wistful.

Here’s a particularly contemplative excerpt from Prentice, looking back:

[Y]ou don’t understand the character of what the pro wrestlers were back then. Characters as in moral and characters as in the characters that they were. They were all larger than life. they were just some of the most wonderful, kind, beautiful, incredible souls. That’s all gone today because these guys are all about making money, being in the gyms, and they couldn’t care less about the wrestling part of it. They’re all just show business entertainers. You didn’t dare call them entertainers. You didn’t call it slapstick. Nothing! They were wrestlers.

When I sit back in my office sometimes and I look at the people on the wall … my gosh, they were special people. I know you’ve had that feeling, where you think you’re the luckiest person in the world to have known so many of them. I mean, I got to know them and to walk the same steps as them. How did I get that lucky? Crusher, Bruiser, the Vachon brothers, Terry Funk, Nick Gulas, Cora Combs. They were all bigger than life. They were stars, but they were wrestlers and they were proud of it … and we had the opportunity to rub shoulders.

Prentice saw it all in his life, so when he throws out some twisted logic, like the passage below, it resonates:

This is the only business in the world where the people who work for you want to be lied to. That’s the truth. The guys would rather be worked because they live in that mentality that life is all a work. So when I tell a guy, “I’m sorry, you just don’t cut it,” the next thing I know, he’s out cutting promos on me, telling people what a jerk Bert Prentice s and how he’s a thief and a con … just because I wouldn’t book him. But if you lie to the guy, or work him, or twist stuff up that really isn’t true just to make him feel better … my gosh, they love me! “Ol’ Bert Prentice is the greatest promoter ever.”

“[W]restling has been my life. People will tell you, from the time I hit the floor from the time I lay down at night, my life has been nothing but wrestling. Will I regret that on my deathbed? I pray that I don’t. Have I regretted it at times in my life? Absolutely! Because you always wonder, “Man, I could have promoted hundred thousand dollar music concerts,”  but wrestling is what I knew and loved.